Here at Raise the Hammer, we have been calling for years for Hamilton to create a truly pedestrian friendly plaza in Gore Park. 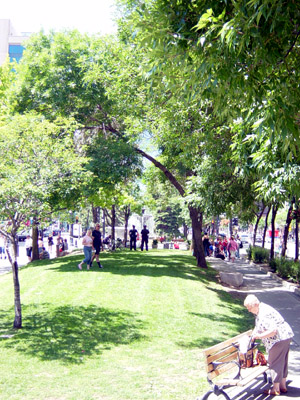 Things looked up for the Gore in October, 2007 when then-mayor Fred Eisenberger proposed to the Public Works Committee that the city consider pedestrianizing Gore Park. The options he presented included closing just the south leg to traffic, closing both sides to traffic, or implementing seasonal or time-of-day closures.

The presentation generated momentum and the city struck up a Gore Park Master Plan project to study options, consult stakeholders and the public, and design a conceptual plan. Public Works is developing the plan jointly with the City's Landscape Architectural Services, Culture, and Transportation Planning groups. 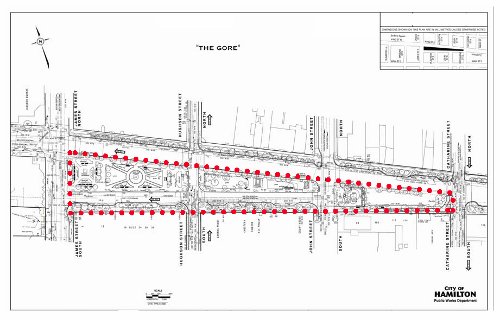 Through the process, council decided to re-route the buses that stopped on the south side of the Gore to a new Transit Terminal on MacNab Street. This would free up the south leg of King Street for pedestrianization. 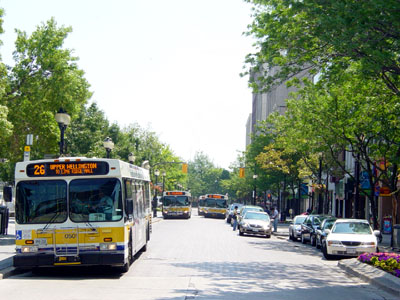 In 2010, the project released a preferred concept plan for the Gore, as well as a functional design study [PDF link] on the pedestrianization initiative.

Staff were going to launch a pedestrianization pilot project in 2011, but Council eliminated funding for the pilot project through the 2011 budget process and the study was nixed.

This is deeply unfortunate. It would not have been difficult or expensive to close the south leg of Gore to through traffic and allow neighbouring restaurants and cafes to provide outdoor seating.

Meanwhile, the former bus stops on the south side of the Gore were replaced earlier this year with metered curbside parking. The Downtown BIA has previously called for this, though they seem to have since come around.

According to Ward 2 Councillor Jason Farr, the parking is only in place on an "interim basis", and pedestrianization will still go ahead as planned, albeit without the pilot study to inform the final plan. "The Gore Master Plan is still on schedule."

Farr is also "hopeful the Royal Connaught [Hotel] will factor in," though he cannot confirm any developments on this file. We would all be pleased to see restoration coincide with the Gore Master Plan construction."

The Royal Connaught was built between 1914 and 1916 but has been closed since 2004. In 2009, the City forwarded a proposal to the Province to have the Connaught turned into affordable housing, which turned out to be highly controversial. The Province rejected the proposal.

According to staff working on the Gore Master Plan, "The Gore Master Plan is still an active project. The next step is the preparation of a 'Functional Plan', which will add required detail to the conceptual plan that was brought to Public Works Committee in January of 2010."

Staff added, "The parking that was recently added is temporary, until such time as the Gore Master Plan is implemented, the dates for which are to be confirmed."

That was, after all, the main reason to remove the buses - to provide space and exhaust-free air to accommodate people who want to sit outside and enjoy the Gore.

This is not conceptually or procedurally difficult stuff. Cities have been establishing car-free zones since the 1950s, and the stretch in question is a mere 220 metres in length. It's not even as though a through route is being taken out of the traffic network - the main leg of King Street would be unaffected.

This decision is merely another reflection of our city's monomaniacal focus on driving as the fundamental mode of transportation.

Canceling the pedestrianization pilot project saved the city a mere $200,000.

Farr notes that the city brings in $2,500 a month in revenue from the Gore parking meters. I cannot help but wonder about the opportunity cost in lost assessment growth from a more people-friendly Gore.

This summer, the Downtown BIA is planning to run a Gore Park Promenade every Wednesday, Thursday and Friday, 11:00 AM to 6:00 PM, between June 22 and September 2.

They are calling on vendors to set up stalls in the Promenade.

an enhanced pedestrian walk can help show off the newest gaping hole in the street-wall along the south side of king!

all sarcasm aside, I think opening the south side of king to pedestrian traffic and vendors is a fantastic idea to breathe new life into the busless corridor.

"Canceling the pedestrianization pilot project saved the city a mere $200,000. Farr notes that the city brings in $2,500 a month in revenue from the Gore parking meters. I cannot help but wonder about the opportunity cost in lost assessment growth from a more people-friendly Gore."

There are doubtless other examples of similarly hapless slashing in the name of a zero percent tax increase, and yet politicians will back-pat themselves into a cheery stupor. Plus ça change, etc. Admittedly, they're spending $30K on a restoration of Queen Victoria, though the her temporary absence will likely only accent the desolation that has settled on the Gore.

History hasn't got fantastic precedents for all-or-nothing revamps of Gore Park, but I hold out hope that this time will be different. And sooner rather than later, because without creative revitalization, atrophy/attrition will continue in our CBD until the heart of downtown is nothing but convenience stores, payday loan kiosks, broken gold outlets, shawarma counters and mounted police patrols.

Buses replaced with parked cars. Even on an "interim basis", this raises questions about a lack of attention to detail and missed opportunities. Now, instead of one side of the street being clear of motorized vehicles, we have vehicles on both sides of the street. Nice. It showcases an utter lack of vision, creativity and support for renewal. "Do what we've always done, but just for now." Hey, I'm inspired.

On the other hand, $2,500 a month in parking revenues does help to pay for Council and senior staff lunches, or some of Councillor Whitehead's legal costs. Might even be "prudent" to install parking meters on the south side of the street as well. Imagine, $5,000 per month. Why, after a year, we could pay almost all of Councillor Whitehead's total legal costs, including staff time. Just a thought.

If only we could install a meter on Terry Whitehead's mouth. Think of the savings.

Anybody know the pricing structure for the Gore parking lot? Are they priced as meter parking (short limits and low incremental cost) or as a parking lot (cheap for full-day stays but expensive for short-term parking)?

Because if it's the former, I can see the appeal as a boon for local businesses, and think it might be worth keeping if it can be shown to help them get customers in.

If it's the latter, then it's indefensible.

But all in all, I preferred just having busses there. The MacNab system actually has made it harder in some ways - the 1 stops in a different stop from the 1A/5C/52/10/5B, the 2/3/6 are now isolated from the other stops way over on John street.

They're self-serve kiosk meters like you'd see in any municipal lot – there are two or three of them spaced along the span where buses used to stop. You could theoretically stay as long as you like. If you can make do without electricity/water/sewer/cable, it would make an incredibly convenient urban RV park.

So in other words, it's a cheap commuter parking lot on what should be some of the most valuable real-estate in our city.

I still don't understand the reasoning behind "getting the busses out of Gore Park". At some point it just became a priority, and all of Fred's pedestrianizing dreams were lost in the shuffle, as LRT may also have been.

Why is the immense amount of foot traffic generated by buses downtown such a bad thing?

City council has rebuilt Gore before. Touching up the fountain/statues and giving us a fantastic new arrangement of railings and flower-beds isn't going to fix what's wrong with downtown.

Council keeps changing its mind. This is mostly due to a lack of clear long-term vision (limited to four years), an absence of convictions (except to be re-elected), a lack of will, and a deep sense of total insecurity (except when it involves the Ti-Cats!)

An optimum solution for Gore Park would be to tear-up the asphalt southward and EXPAND the park PERMANENTLY.

Oh wait! We should FIRST consult every business involved with this before we call a sub-committee to review the matter and give us recommendations which we can then propose to the population at large so we can get the feedback which will allow us to make up our collective minds to contradict the results AND DO NOTHING.

Making the south leg of gore a pedestrian only zone (at least in summer) I think is a good idea know that the buses are out of there. Maybe it could help to create a hess village type atmosphere there - at least on a smaller scale.

In the meantime how about installing some better lighting in the core? Why does the dt have to look so bloody dark at night? No wonder people (especially women) don't want to go down there.

I just wrote a letter to the editor at the Spec, in response to a letter from a visitor complaining about dirty Gore Park and all the birds!!!! It was inspired by what I read here; hope they print it!

To the visitor who enjoyed her recent visit to Hamilton’s downtown, except for dirty Gore Park full of birds and homeless people, let me assure you that our city has a plan to “pedestrianize” and revitalize this area, closing it off to traffic and making it a real people place, hopefully in time for the Pan Am Games in 2015. Hamilton.ca details the Gore Park Master Plan:

Assessment of the form, function, and essence of the Study Area and any resulting recommendations will pay special attention to the uniqueness of this site. The process and outcome will respect its extraordinary physical identity, and its presence in the collective psyche of Hamilton's people. Although the special character of the Gore is somewhat elusive, it is recognized as significant and borne of over 150 years of attendance as a physical and psychological anchor in Hamilton.

In our City Council’s 2011 budget process, they eliminated funding for the pilot project of the pedestrianization of Gore Park ($200,000) but our local councillor assures us that the project is still on schedule. I agree with you: the benches are filthy and foul, and the park needs some cleanup, but our scruffier citizens have every right to be there, and so do birds. The problem isn’t poor people; it’s the fact that Gore Park has been surrounded by speeding traffic and idling buses for far too long, and it was a victim of previous administrations who had a vision of the downtown that included razing Victorian architecture and paving everything. When at last it becomes a real people place, you will see a mix of all kinds of citizens enjoying the park. We had a taste of what it is evolving into with a Promenade of vendors and music and a wonderful cupcake truck this summer. Please come again; I hope you will be pleasantly surprised!