The Essential Economies of Cities

If we hope to make good decisions about how to plan and manage our city, we need to understand how cities fulfill their essential role as engines of economic development.

Cities are the absence of physical space between people and companies. They are proximity, density, closeness. They enable us to work and play together, and their success depends on the demand for physical connection.

— Edward Glaeser, Triumph of the City

Cities are inherently engines of economic development. By their very nature, cities bring a diversity and critical mass of people, ideas, energy and material inputs into close contact to generate enormous value.

If we hope to make good decisions about how to plan and manage our city, we need to understand how cities fulfill that role. Cities provide five essential economies that work together to enable the chain of creativity-invention-innovation that drives economic growth.

Economies of scale are well-understood. Quite simply, a larger market means fixed costs of production are divided among more customers. By bringing large numbers of people together, cities make it easy to enjoy economies of scale.

At the same time, cities make it possible to cultivate and target niche markets.

It is common for multiple firms in the same business to locate close to one another. This might seem to increase competition, driving margins down, but firms that cluster get to enjoy the benefits that come from sharing suppliers, specialty suppliers and shipping nodes.

The cluster of firms draws a larger, more expert pool of employees, and local schools start to specialize in training for the required skills.

In short, the economy of agglomeration generates positive feedback loops that more than compensate for the increased competition.

As Richard Florida puts it in his book Who's Your City?, "Creative people and companies cluster because of the powerful productivity advantages, economies of scale, and knowledge spillovers such density brings."

Density means doing more with the same footprint - in other words, building up rather than out. When you increase the density of land use, the unit costs for infrastructure go down: roads, water, wastewater and power.

Communications costs also go down: courier, phone, cable, broadband, wifi, and so on. This allows communications providers to deliver more service for the same money. In fact, density provides a cost-effective way to introduce new communications infrastructures that are eventually rolled out to less dense markets once costs start to fall.

More important, density means that destinations are closer, and more destinations are nearby. That means transportation costs also go down, and you have a wider choice of what mode to use to get where you're going: walking, cycling, transit, or driving.

Mixed use at Yonge and College in Toronto (Image Credit: Flickr)

Richard Register puts it best in his book Ecocities: "The shortest distance between two points is moving them together; every trip from then on is shorter. That's an efficiency multiplied thousands of times."

This may be the least well-understood but most powerful economy: by putting more (and more diverse) people into contact more frequently in settings that are both formal and informal, both planned and serendipitous, cities provide the ideal conditions for creating new ideas.

With the exponential increase in the variety and efficiency of ways to collaborate, the economy of association drives innovation. The evidence bears this out: by a variety of measures, the innovation rate is higher in cities that are larger and denser and bring a variety of people into contact.

This allows for cross-fertilizing ideas from one intellectual domain to another; asking open-ended questions; challenging orthodoxies; forking a project into separate groups that progress independently; and merging forked developments to integrate their best features. 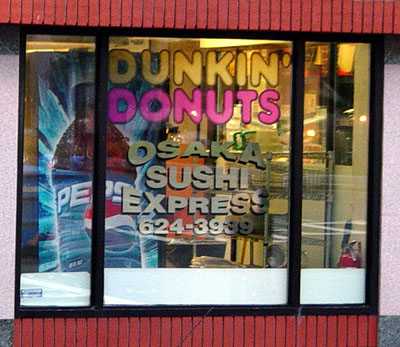 Finally, by allowing organizations to grow big and efficient, cities provide a platform from which those organizations can expand into new markets. It is to take advantage of the economy of extension that cities tend to develop around ports.

The economy of extension also allows cities to share innovations. An idea that is developed, implemented and battle-tested in one city can expand to other cities once it is proven to work.

These five economies are well-understood, so as a city we need to ask: what can we do from a planning and city management perspective to take better advantage of this?

This essay was adapted from a presentation I made with Peter Topolovic at the 2011 Hive X Conference. It was first published in the November, 2011 issue of Urbanicity.

Delightful article. I'm really enjoying how "cool" it is these days to talk about economics.

The primary issue for me when it comes to cities is the relationship between the city and the rural "hinterlands" beyond it. Historically this has been a rather one-sided relationship, leading to an incredibly un-balanced flow of people and resources into the cities. People often focus on how internally efficient (economically or ecologically), while ignoring the larger-scale costs.

The solution, if one exists, would be to further leverage the principles listed above to focus on making cities as efficient and self-reliant as possible (if not within themselves then at least between each other). I'd add one more principle, though, "economies of recycling". Because of the large number of productive activities that take place in cities, a large amount of waste is produced. Because they often use similar materials but in different scales (ie: upholstery vs wallets), much of this scrap is still useful. It can be trucked to the countryside and dumped, but that's certainly not an ideal approach. By re-using and recycling them, we can make use of this virtually free, ultra-local sources of materials which are already highly processed (plastics, metals etc). This plays an important role in supporting lower-income residents (scrappers, salvagers etc) as well as incubating new creative ventures (who can experiment with very cheap materials before ordering them).

This article (as well as visiting other cities) fills me with hope. Unfortunately I get rather depressed trying to see them implemented here. Including my own struggles.

I'm sure some one far smarter than me can explain this, but I was wondering about point 4.

"The evidence bears this out: by a variety of measures, the innovation rate is higher in cities that are larger and denser and bring a variety of people into contact."

I assume that this means that the more diverse & larger a population is, the more innovative it will be?

I think of countries that have homogeneous & large city populations, such as South Korea, Japan, China and others and look at their levels of innovation, and I'd say they are pretty high. Or am I wrong?

I always find this whole "people type A is not smart enough to carry on without the inclusion of people type B & C thrown into the mix" seems a little broad in it's application.

But then there is the obvious fact that differing ideas contribute greatly to innovation and development, which I don't think anyone can argue. So is it a necessity? Or just helpful?

Just seems strange to me... perhaps these are just outliers, but if that's the case, then how many outliers will it take until they are not outliers anymore, but just part of the normal distribution.

Perhaps I'm over-thinking this, as my work slows down mid-month!

PSS: I agree with TnT; I am somewhat skeptical about other cities ideas being successfully transplanted to Hamilton, as each city is different... but then again, you never know until you try!

I read #4 as more of an issue relating to cultural innovation. Foods, arts, languages, philosophy - all tend to transform when exposed to each other. The explosion of culture coming out of New York, New Orleans or San Francisco. Note that all of these have lead to economic prosperity.

I think of countries that have homogeneous & large city populations, such as South Korea, Japan, China and others and look at their levels of innovation, and I'd say they are pretty high. Or am I wrong?

Whenever I hear "diversity", I tend to think only of racial diversity, and not the other factors... damn brain!

I should also add that the countries you mention are more culturally diverse than they might appear to Westerners. I can't speak to Japan and Korea so much, but there are certainly many ethnic minorities in China and the larger urban centers there likely benefit from this cultural diversity in much the same way as immigrant nations like our own.

Ahhh.... that makes sense; thanks for clearing it up. I knew there we smarter people than me here:)

There is an interesting article titled "Canada's strip malls crumbles toward extinction" by Tristin Hopper in today's National Post. It seems to tie in with the editorial and many of the posts made in this thread. http://news.nationalpost.com/2011/11/13/...

About damn time we started getting rid of those parking-lots-with-amenities. Next up, their siblings the business parks...

The key to saving their "genetics", is providing alternatives - legalizing the use of inner-city spaces (warehouses, former homes and parking lots) as spaces where people can open shops and other ventures without a bylaw/zoning nightmare.

Zoning nightmare seems to be the biggest set back to anyone who doesn’t give a kick back in the past. There are some very progressive people at city hall, you just have to dig for them.