The goal is a park that includes protected natural habitats for the rich diversity of species living around Cootes, hiking trails, boardwalk and visitor centre, and historic preservation of a major part of Hamilton's industrial heritage.

A new 42 minute documentary, produced by Wade Genders and Glen Provoist and directed by Dr. Brian Baetz in McMaster University's faculty of engineering, explains the concept of the Dundas EcoPark and outlines the opportunities and challenges.

The Dundas EcoPark proposal is to secure privately-owned land to create a 2,000 hectare (4,950 acre) contiguous protected conservation area surrounding Cootes Paradise. Most of the land is already publicly owned, but fundraising is underway to purchase the remaining land. 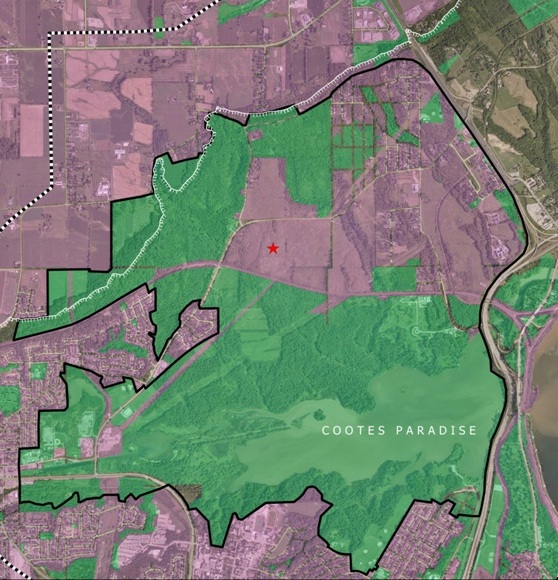 The campaign also seek to re-naturalize land along the north shore of the Desjardins Canal, an area that includes the Ben Veldhuis Greenhouse property and nearby city-owned marshlands. Valdhuis put Dundas on the map as a a worldwide supplier of cacti and the impetus for the Dundas Cactus Festival.

The Hamilton Conservation Authority recently purchased 21 hectares (52 acres) of land along York Road and is looking to secure a little less than $300,000 in additional funding to pay for the purchase by the end of 2013.

The goal is a park that includes protected natural habitats for the rich diversity of species living around Cootes, hiking trails, boardwalk and visitor centre, and historic preservation of a major part of Hamilton's industrial heritage.

As Vandberbrug summarized the campaign:

You have to be able to look beyond your own life years, I guess, and your own lifespan, and say: this is so important for the city and for our children and grandchildren, and if we don't act now, and if I just sit back and let it happen or not happen, then I'm sort of guilt of not making this city what it can be.

You can donate to the campaign to help finance the land acquisition and restoration work.