Hamilton Continues to Destroy its Heritage and Kill its Downtown

Hamilton has so much promise, so much going for it, and never misses an opportunity to screw it up.

Over at NRDC Switchboard, Kaid Benfield points to a quote by Phil Myrick about building cities that work.

Creating lively town centers and neighborhoods that enhance pride of place and promote local economic development is critical to improving local quality of life as well as quality of the environment. In fact, we can reinvent entire regions starting from the heart of local communities and building outwards.

That's not the way it works in Hamilton, Ontario, a medium-sized city west of Toronto and a case study in how you mismanage assets and opportunities. I described the city earlier:

Hamilton, Ontario should be a great city; it has geography (a great location close to the border, a great big harbour that is now quite beautiful), topography (a nice "mountain" that keeps it from being boring), a major university and great transportation connections. It has (compared to Toronto) affordable housing, within viable commuting distance by commuter rail. It should be succeeding.

Instead, its main streets are five-lane throughways lined with empty shops, and people who live in historic neighbourhoods can't shop for a quart of milk without getting in their cars.

Right now in its historic heart, the Gore, four historic buildings that have suffered from neglect for years are on the verge of destruction.

Heritage activists are, of course, upset: the developer has filed no formal plans for the site but the city issued demolition permits.

After last-minute meetings, the developer promised that he is going to save the important parts of the buildings, then he says that he will carefully take them apart brick by brick for future reconstruction.

The city refuses to protect the buildings (even though they are in a historic district) and the Provincial Minister responsible for the Heritage Act that governs such things refuses to act.

But wait: did I say that Hamilton didn't care about heritage? Just down the street, there is some real local economic development. A new restaurant has opened, a nice replacement for the usual payday loan joints and dollar stores. 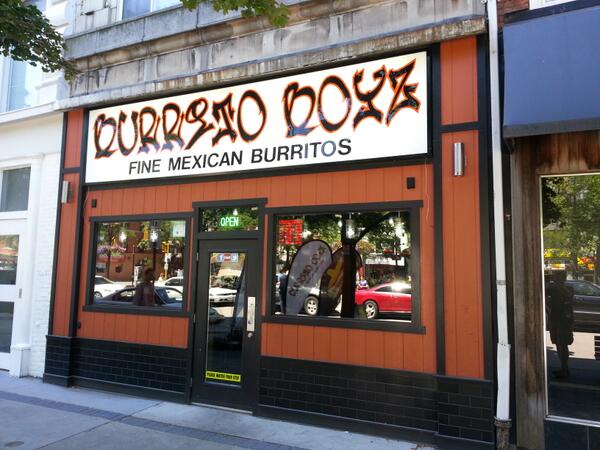 Ryan McGreal of Raise the Hammer describes it as "well decorated, clean, operated by fast, efficient and friendly staff, all in the service of selling delicious, high-quality sandwiches to a bustling daily clientele."

Now the city is going after the restauranteur, because the storefront doesn't comply with the heritage guidelines for the district. I will admit that it isn't the prettiest facade, but really, as Ryan McGreal notes:

We seem perfectly willing to bend over backwards to accommodate "compromises" for developers who want to demolish heritage buildings, and then nitpick to death those entrepreneurs who make the kinds of small-scale, building-by-building investments that are actually responsible for the nascent recovery of the core.

There is the classic double standard taking place, where the big developer and property owner gets what he wants every time. But the young entrepreneur? the inspectors need something to do to fill their day.

Across North America, planners, architects and economists are recognizing that the key to sustainability is building strong, walkable urban cores. Peter Calthorpe writes:

Pedestrian-oriented development is really at the heart and soul of great cities. Every city that you love is a city that you want to walk in.

The keys to walkability include complete streetscapes that aren't interrupted by parking lots, lined with viable retail and restaurants and other uses that people want to visit. But they don't get that in Hamilton, never have. What a waste; it has so much promise, so much going for it, and never misses an opportunity to screw it up.

Lloyd Alter is managing editor of TreeHugger and editor of the Design section. He has been an architect, developer, inventor and prefab promoter. He now writes for green websites TreeHugger and Planet Green, and teaches sustainable design at Ryerson University School of Interior Design. Lloyd is also a Past President of the Architectural Conservancy of Ontario.

Good recap, if a bit painful.

He's absolutely right. Sadly this is the kind of press that gets national, urban attention. City Hall is so out of touch with reality it's pretty mind-boggling.

Absolutely agree. Look at the mess that is the new hotel in downtown Hamilton. Absolutely no effort made to blend in with the rest of Hamilton's historic or modern buildings. Looks like a stalag. It, and city hall's allowance of it, are disgraceful.

If Hamilton was anywhere else in the world, it would be a resort community. It has so much beauty potential, as well as proximity to natural resources.
It needs a big clean up inside and out!

We are left at hoping for a miracle stage.

Add "Hoping for a Miracle Since 1956" to the treasure trove of potential city mottos.

For what is with the Burrito Boys ,, there façade is Mexican not vintage Hamilton like 18-28 king city hall is pushing smale biss away

So for several years we're going to have 5 empty lots facing Gore Park where these historic brick and timber buildings now stand.

I guess all we can do then is show our great displeasure during the 2014 election by campaigning hard against the Councillors who allowed this destruction to occur: At the January Planning Committee meeting, heritage designation for the Gore buildings was voted down by suburban councillors COLLINS (Ward 5), CLARK (Ward 9), FERGUSON (Ward 12), PARTRIDGE (Ward 15) & PEARSON (Ward 10).

Downtown Councillors have spoken mildly in favou of saving the buildings, but what have they really done to save them? Not enough! Councillors FARR (Ward 2), MCHATTIE (Ward 1) MERULLA (Ward 4),MORELLI (Ward 3, on sick leave).

By ELECTION time, the absolute folly of destroying the historic core of Hamilton will be blatantly apparent to the entire city, the orovince, the nation and Hamilton will be an international pariah and laughingstock ... AGAIN ... and political careers may falter and die on this issue ... but it will be TOO LATE to save the buildings, too late to fix the mess that was once the historic core of Hamilton.

Who's going to want to 'promenade' in front of empty lots? May as well save the money being spent on that foolish idea. Unbelievable. Pathetic.

Listen to the builders' 'vision' for this last remaing remnant of Hamilton's once beautiful and historic core: https://www.youtube.com/watch?v=YR8UaXor... That's right folks! THERE IS NO VISION!!!! Not the Councillors, not the mayor, not the builders ... NO ONE IN THIS MESS HAS ANY VISION AT ALL OF WHAT THE DOWNTOWN CENTRE SHOULD BE!!!!! And yet they apply for and approve DEMOLITION OF THE CORE !

The 'VISION' of this city council is to go into an ELECTION with 6 empty holes where attractive heritage buildings stood ... buildings now on Heritage Canada's list of 10 "most endangered' heritage sites.

Reap what you sow councillors! Destruction of the Gore streetwall will be destruction at the ballot box ... in the history books ... and in the popular

And Councillors JACKSON, DUVALL, WHITEHEAD, JOHNSON, POWERS, PASUTA and Mayor BRATINA ... what were you doing while the Gore was being destroyed?

A book will be written with Hamilton the key player ... How NOT to rejuvenate the core of a city ... How to KILL a growing buzz about a city!

Hey what's with the EMPTY STOREFRONTS at 18-28 King E facing Gore Park where there recently were businesses operating?

If you think their facade is "Mexican" I think it's high time you visited Mexico.

Those councilman will be elected because they are representing the wills of their voters. Majority of voters don't care or know about DT. Till more awareness gets out all is lost.