Central to this lively book is the notion that we are literally surrounded by fruit in our cities, and yet nobody has any idea what to do with it. 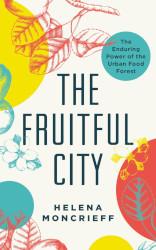 In February of last year, my elderly and eccentric neighbour - he currently holds the record for most security cameras on his front porch - without warning moved away and put his house up for sale.

We knew that with it being a so-called double lot (50' wide) in a desirable neighbourhood that the most likely situation was going to be a demolition of the fairly run-down house, and at least one, if not two, infills going in. That also meant that the majestic pear tree in the back yard had likely seen its last winter.

This pear and our family go way back. The first autumn we lived here, we realized the pears were just dropping into our neighbour's yard and becoming wasp food until they were chewed up by the huge riding mower he used to mow his lawn.

We asked if he would mind us harvesting them, and he was delighted the fruit would be used. Every fall afterwards we harvested some of the sweetest, tastiest pears you have ever had. We had no idea what variety they were - the tree looked like it was 100 years old if it was a day.

But we knew that soon those harvests would end. So in the dead of winter, with the property vacant and a for sale sign on the lawn, I snuck next door and with my pruning pole took as much one-year-old growth as I could find and stuck it in the fridge.

My intent was to try my hand at grafting this heirloom pear onto the ugly and sturdy Bartlett in our backyard that we had picked up at a Fortino's garden centre close-out sale for $11.00

A similar story of a fruit tree on death row begins Helena Moncrieff's journey through urban orchards in her book The Fruitful City.

Set mainly in Toronto, with brief trips to Victoria and Halifax, the book is anchored in the tale of Francesco, a Portuguese immigrant who moves to the St. Clair neighbourhood of Toronto and grows a fig tree. Every fall he lovingly prepares it for the harsh winter to come, bending the branches and wrapping them in plastic to protect them from the cold.

Then one day he is gone, and the home is sold to a lovely young couple without either the time or knowledge to care for the tree, which faces its first winter without pampering.

Part longing for their old home, part exercising dominance over their new home, Moncrieff explores why new arrivals to Canada brought their trees with them, often scion wood smuggled in the sleeves of coats, and what that means for those of us who may be inheriting those properties as each wave from the old world passes on.

Moncrieff charts how successive waves of immigrants brought both their culture and their orchards to Canada: apples with the French settlers in Quebec and Ontario, stone fruits and figs with the Italian and Portuguese immigrants, cherries with the Ukrainians. Just as our culture has been shaped by immigration, so has our urban tree canopy.

Central to the book is the notion that we are literally surrounded by fruit in our cities, and yet nobody has any idea what to do with it. She highlights the efforts of the seminal Victoria Fruit Tree Project - a group that provided volunteers to pick fruit from people's back yards, with a share going to the homeowner, the picker and local food banks.

Of course, the idea soon spread across Canada. Moncrieff gets up close and personal with Toronto organization Not Far From the Tree, going on a highly coveted pick, and following her produce to the end users at a local food bank and soup kitchen. Hamilton's now defunct Hamilton Fruit Tree Project even gets a mention.

Fruit trees in people's back yards, however, are inaccessible to those who might need them most, so Moncrieff explores why there are not more public orchards in cities.

She goes to Halifax to see their successful model and learns some tough lessons alongside Toronto organizers who had to educate their neighbourhood from scratch on the technique and etiquette of picking fruit from a public tree.

Moncrieff is a lively and engaging writer, so even if you're not as passionate as we are about fruit trees, local food and food security, it's a great read about an important issue.

Fruit trees and urban orchards won't solve the food security issue on their own, but they're an important piece of the puzzle. We would be foolish to ignore the abundance that surrounds us every autumn.

In the end, we were right. Our neighbour's property was purchased by a developer, and after a brief fight with us at the Committee of Adjustment, he now has a demolition permit. The pear tree was cut down just before Christmas. Two of the five grafts I made last spring were successful.

While the pear met the same fate that Francesco's fig likely will, at least in some way its fruit will hopefully live on.