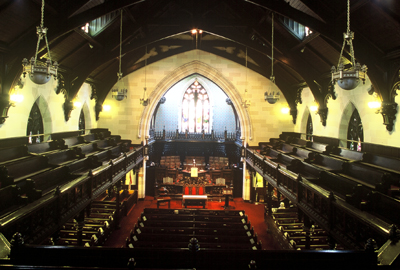 When Augustus Welby Pugin (1812-1852), the great English Gothic revival architect and polemicist, married his third wife, Jane Knill, in 1848, he wrote to a friend, "I am married, I have got a first-rate Gothic woman at last, who perfectly understands and delights in spires, chancels, screens, stained glass, brasses, vestments, etc."

That Pugin says "at last," suggests that even at a time when fervour for Gothic was at its height, it was still not easy to find a like-minded partner. Today, when passions for Gothic are distinctly diminished from those of the mid-19th century, Pugin's quest would prove significantly more difficult. Be that as it may, for Hamiltonians the city provides a good starting point. It is blessed with a number of first-rate Gothic buildings, not least of which is St Paul's Presbyterian Church.

In More 19th-Century Churches in Hamilton (Raise the Hammer, May 5, 2006), I introduced the architecture of St. Paul's Presbyterian Church (70 James Street South, at Jackson Street). In October 2006, St Paul's celebrates the 100th anniversary of the installation of the chimes and the 35th anniversary of its chimer. This anniversary is a significant event in the life of St. Paul's and the life of the people of Hamilton. For this architectural historian it provides an excellent excuse to invite you to explore some of the finely executed Gothic aspects of this church. 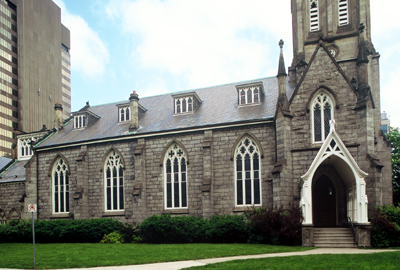 St Paul's was designed by William Thomas (1799-1860) in 1854. Thomas received his architectural training in England and worked in Birmingham and Leamington Spa (Warwickshire) before moving to Toronto in 1843. There, he soon established a successful practice which became renowned for its church designs.

St Paul's Anglican Church, London (elevated to Cathedral in 1857) was built between 1844 and 1846, and work on St Michael's Roman Catholic Cathedral, Toronto, commenced in 1845. In both churches, Thomas demonstrated his profound knowledge of English medieval architecture. 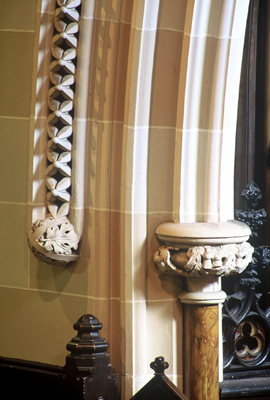 Thomas's earliest commission in Hamilton came in 1847 for the Bank of British North America, located at King and James Streets (now destroyed), and this was followed in 1852 by Christ Church (now Cathedral) – see Raise the Hammer May 5, 2006, figs 3 and 4. Then, two years later, came the commission for St Paul's Presbyterian, or St Andrew's as it was before the name change in 1874.

It presented the architect with an interesting challenge.

On the one hand, it had to be built in the Christian style, in other words the Pointed or Gothic style favoured by the vast majority of congregations in the 1850s, whether Catholic, Anglican, Baptist, Methodist or Presbyterian. This involved reference to the True Principles of Augustus Welby Pugin, as published in 1841, in which all aspects of medieval ecclesiastical architecture were followed assiduously.

We may note that Pugin's views had been forcefully promoted by the Scottish-trained, Toronto-based architect, William Hay, in an article entitled "The Late Mr. Pugin and the Revival of Christian Architecture," in the Anglo-American Magazine, published in Toronto in 1853. 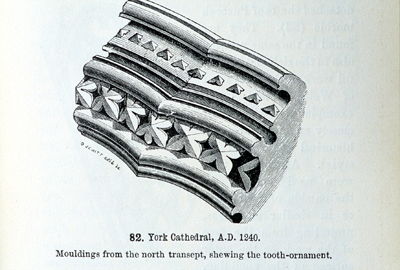 Fig. 4. York Minster, detail of N transept arcade, from John Henry Parker's, Introduction to the Study of Gothic Architecture, 1849. (Click on the image to see an enlargement in a new window)

On the other hand, a church intended for a Presbyterian congregation could not successfully adhere to the strict tenets of a medieval plan with a separate sanctuary for the high altar and choir, and a long nave for the congregation. The Presbyterians required focus on the pulpit and therefore the long medieval nave, especially one flanked with aisles divided by large stone piers, was quite impractical. A successful preaching space had to be shorter and wider and include galleries for the congregants to see and hear the preacher.

Thomas's design fitted the requirements (Fig. 1). It may be seen as a Gothic version of the neoclassical church of St Andrew's, Niagara-on-the Lake (1831), and as a variant of his own church of St Matthew's, Duddeston, near Birmingham, built in 1839. Apart from the open timber roof which followed medieval models, the form of the interior would have made Pugin turn in his grave. 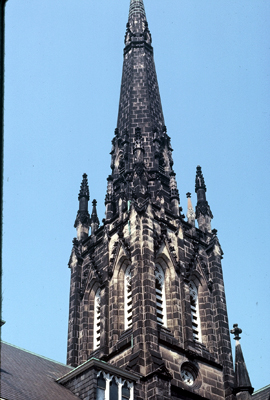 In particular, the inclusion of galleries would have been intolerable. That they cut across the windows and were therefore not expressed in the exterior articulation of the building would have been untruthful (Figs 1 and 2). He would have also disapproved of the basement for the offices and school rooms. Be that as it may, Pugin was not known for his liberal ideas on either architecture or religion.

He was a convert to Catholicism and anything that did not follow the ritual of the medieval form of Catholic worship and its exact architectural setting would not have been acceptable. Viewed in a less fanatical way, William Thomas produced a near-perfect Gothic church for the Presbyterian congregation, one that provided a workable seating arrangement in an exquisitely detailed Gothic frame. It would have been the envy of all Christian congregations in Hamilton, and, as we shall see, many of the details may even have brought a smile to the face of Pugin's ghost. 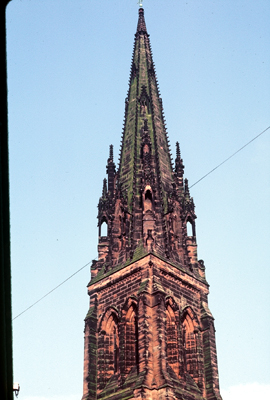 On the choir arch (Fig. 3), the details of the mouldings are based on 13th-century sources. In particular, the dog-tooth ornament – a stylized version of dog's tooth violet – may be compared with one of the arches in the north transept at York Minster, as illustrated in John Henry Parker's, Introduction to the Study of Gothic Architecture, first published in 1849 (Figs. 3 and 4). Even though Thomas had studied English medieval churches before moving to Toronto, publications like those of Parker remained important reference works.

St Paul's was exceptional in 1850s Ontario for the stone spire which was completed according to Thomas's design (Fig. 5). In Toronto, although the body of St Michael's Catholic cathedral was completed in 1848, the belfry and spire were only added in 1865, and then not to Thomas's original design. Similarly, St James's Anglican Cathedral, Toronto, commenced in 1850, had to wait until 1873 for the completion of its tower and spire.

Moreover, St Paul's tower and spire display a host of medieval details, even from the Middle Pointed or Decorated phase of English Gothic of the late 13th and first half of the 14th century, so loved by Pugin. Comparison of St Paul's with Pugin's St Giles's, Cheadle (Staffordshire) (1841-1846), demonstrates the point (Figs 5 and 6). 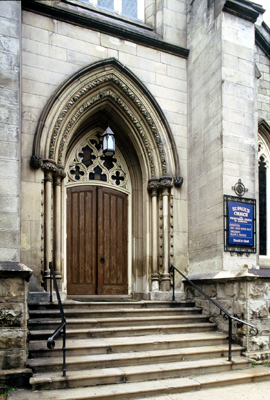 Both have twin, pointed belfry openings on each side of the tower. The corners of the tower are reinforced with buttresses at right angles to the walls. The octagonal spire has lucarnes (pointed openings topped with gables) on alternate sides. There are even narrow angle turrets each with their own delicate spire adorned with crockets (curling sprigs of foliage)up the sides and a finial (a cluster of curling leaves) at the top.

Further Puginian analogues are evident in the main east doorway of St Paul's (Fig. 7). The foliage capitals and the stylized flowers between the shafts are similar to the entrance to the south porch at St Giles's, Cheadle (Fig. 7 and 8). In both cases, the arch is framed by a projecting hood mould or label and this rests on label stops in ball-like bunches of foliage. 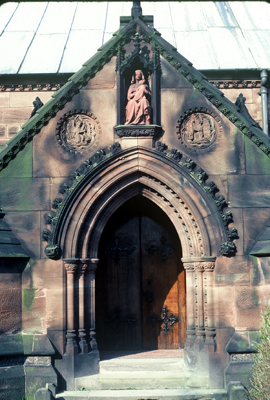 In the arch, projecting roll mouldings alternate with carved ornament. At St Paul's this carved foliage is more prolific than on the Cheadle porch but the continuous carving on the order may be related to the west doorway of Pugin's church (Fig. 9).

Features like the cut-stone masonry and well-proportioned, stepped buttresses are convincingly Gothic in a medieval, and concomitantly Puginian, sense. Pugin would also have approved of the side porches and the clear external articulation of the vestibule (Fig. 2). 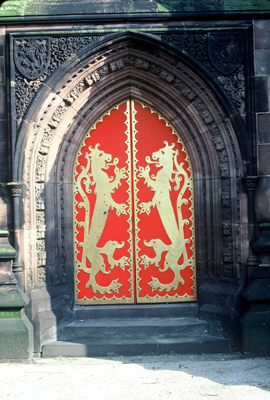 Medieval documents rarely describe works of art in detail but often they comment on variety of form or ornament most positively. It is therefore significant that we find different types of tracery in the windows of St Paul's (Fig. 2). This is just the sort of detail that was revived by Pugin. The second window from the right on the south side is typologically the earliest in medieval terms (Figs 2 and 10). This is known as Geometrical tracery because of the use simple geometrical forms – circles enclosing quatrefoils and a trefoil - in the head of the window.

Window tracery was copiously illustrated in the many books and manuals on Gothic architecture published in England in the 1840s and 50s. And, in 1849 Edmund Sharpe published a book entitled Decorated Windows: A Series of Illustrations of the Window Tracery of the Decorated Style of Ecclesiastical Architecture, in which sixty windows were illustrated. Our illustration of the window at St Peter's Oundle (Northamptonshire) (Fig. 11) for comparison with the window from St Paul's (Fig. 10), is taken from Sharpe. 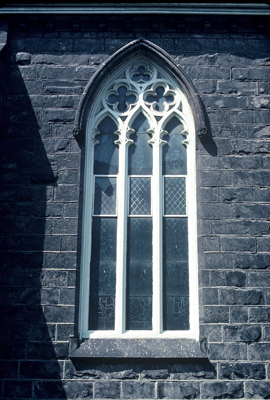 The first and fourth windows at St Paul's have flowing tracery, so called because patterns flow from one unit to the next rather than being divided geometrically (Figs 2 and 12). Plate 246 from John Henry Parker's, Glossary of Architecture, published in 1850, provides four parallels for Thomas's design (Fig. 13). 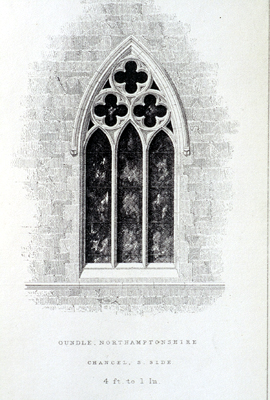 Fig. 11. St Peter's Oundle (Northamptonshire), window, from Sharpe's Decorated Windows. (Click on the image to see an enlargement in a new window)

It remains to be noted that the choir at the west end of St Paul's was extended in 1909, to the designs of a son of the church, Hugh Vallance, who apprenticed under Charles W, Mulligan of Hamilton before acquiring more advanced architectural training in Paris. The dormer windows were added in the sanctuary roof, otherwise Thomas's masterpiece remains as he designed it.

Visit it and be sure to take your binoculars to see the details of the tower and spire. You'll enjoy a first-rate Gothic experience. 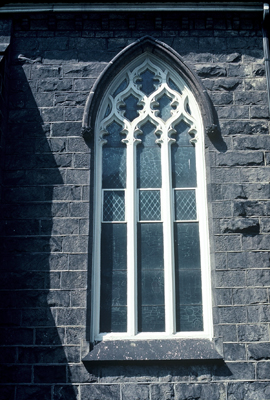 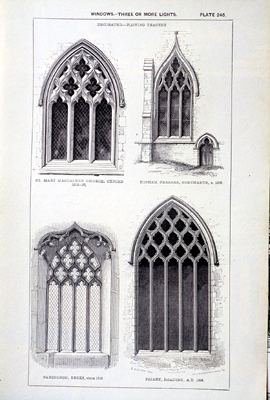 Fig. 13. Flowing tracery designs from John Henry Parker's, Glossary of Architecture. (Click on the image to see an enlargement in a new window.) 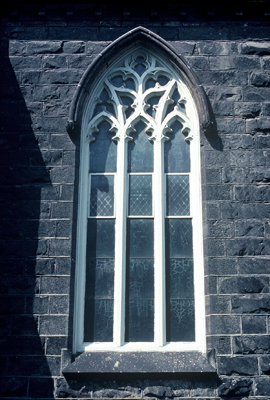 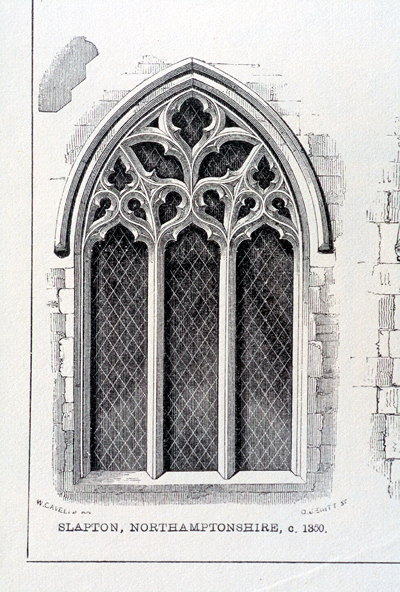 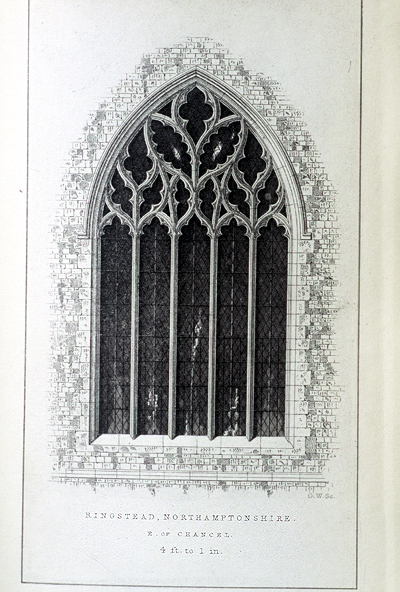 Professor Malcolm Thurlby. PhD, FRHist.S, FSA, teaches art and architectural history at York University, Toronto. His research focuses on Romanesque and Gothic architecture and sculpture in Europe, and 19th- and early 20th-century architecture in Canada. He concurs with John Medley (1804-92), Bishop of Fredericton and champion of the Gothic Revival in New Brunswick, that "some knowledge of Church Architecture ought, surely, to be a part of every liberal education."

There's no doubt St. Paul's is a magnificent-looking church. I've always wanted to see the interior, so thanks for the inside look!

I wonder how many Hamiltonians have been to Thomas' churches in Europe. Perhaps they marvelled at the architecture and talked about how Europe has such beautiful buildings...and all this time, a gem is right under our noses.

Is this the same architect who designed the Thomas Building in 1854 (same year as St. Paul's) that is adjacent to the Lister on the James Street?

If so, doesn't that make the Thomas Building on James more significant? And worthy of preservation by LIUNA/Hi-Rise?

If you are fans of Edmund Sharpe, you should oppose this inappropriate development at Wyreside Hall: http://dasteepsspeaks.blogspot.com/2011/12/adam-would-turn-his-grave.html