Walkability Fail at Aberdeen and Kent

During 2008's Kirkendall Walkability Study, several residents on Kent St. asked the city for a crosswalk at the corner of Kent and Aberdeen Ave., a busy intersection for foot traffic of students heading south on Kent toward the HAAA Park and Ryerson Middle School.

This is how the city responded: 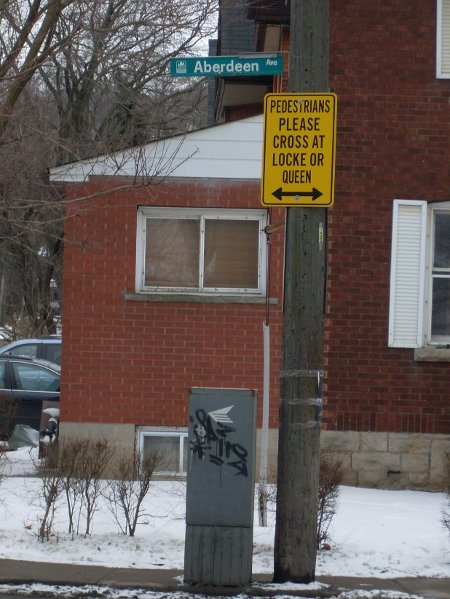 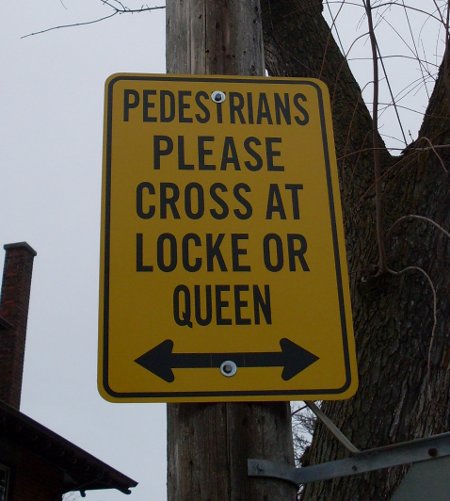 The city is telling the residents of a mixed urban neighbourhood - and particularly the neighbourhood children who frequent this crossing on their way to and from school - that they need to walk 400 m out of their way to cross at Locke St. or Queen St (200 m each way) just to cross the street, so as not to inconvenience motorists.

This, folks, is institutional insanity.

Hamilton! The best place to raise a child!

Michelle, you had a typo in your post. It's "the best place to raze a child."

What blows me away is that this is one of our most affluent neighbourhoods, and it still can't get the city to implement basic measures to promote pedestrian safety and convenience.

Dear City of Hamilton: This sign is your best solution in regard to childrens safety. Boy I wonder how much the top people in this department make, how about all the legal beagles. Of course these decisions makers will hang on tight to their living wages, benefits and pensions, meanwhile, so many children go hungry and even those in the better neighbourhoods are second class citizens in camparison to vehicles.

Man, have you people got your priorities bass ackwards.

Time for a little guerrilla line painting and signage, I'd say.

This really gets my goat! We have been contemplating asking the city about placing a push button cross walk at Robert and John (so many people cross there regularly) but it looks like their response will just be to make a sign!

It would be awesome if we could get enough people to protest this type of disrespect towards pedestrians by blocking traffic every once and a while!

Not to mention Aberdeen and Queen is a high crash intersection. Disaster for pedestrians trying not to get skinned.

Wow. I wonder if one person, in the history of this sign being there, will ever decide to walk to Queen or Locke to cross, not because of speeding cars and concern for their safety, but because the sign informs them that it's the right thing to do? Perhaps some people get off the bus there and don't know that Queen or Locke streets exist and have traffic lights.

This begs for a link to that 'How's that enforcement working for you' article.

for even more hilarity, check out the new 'pedestrian crossing' signs that have been installed on Main St in the area of Pearl St. The other day I saw a couple of kids standing at the painted crosswalk waiting to cross while an Indy 500 roared past them. In Toronto they put up X's with push buttons so pedestrians can actually, well, cross at a crosswalk. The fact that the crossing signs are bright yellow and the paint on the road has been refreshed doesn't mean anyone with a brain will actually step out and cross there. At least not until the mini-Indy has a brief lull.

It's pure lip service and a waste of money IMO. Take down the signs (including these moronic ones shown by Ryan) and spend the money on pedestrian X crossings with flashing lights and push buttons..... or just have the school boards ramp up bus service so nobody has to walk to school anymore.

This situation left me quite puzzled: Kent is west of Queen; Ryerson is east of Queen. What the hell the is the problem with just crossing at Queen since one must cross it at _some_ point? And why in heaven's name would Locke even be considered an option? Well, this map with walking route marked helps clarify the situation ...

Aberdeen and Queen is a busy, awkward corner and requires that kids walk almost entirely on two very busy streets: Aberdeen and Queen. By crossing at Kent, you could zigzag through the residential neighbourhood most of the way.

On a related note, I made the mistake of walking from Fortinos at Dundurn Plaza back to Westdale yesterday- goddam death trap. Unless, of course, you do what you "should" do and walk east to King & Dundurn, go east across Dundurn, then north across King, then go west across Dundurn and then finally make it back where you started from and head toward Westdale. Madness. Next time I go there I'm bloody well driving, no matter that it's only 15 minute walk - certainly that's the only mode of transport the city has in mind there.

And yet-- how much would button-activated crosswalks help the situation in a city where the movement of cars is the default priority? We have a push-button crosswalk here at Balmoral/Maple and King St. E, by the Delta No Frills, but I've seen cars run it. The problem is that this is the location where King becomes two-way, and drivers, if they've had green lights on the last leg of it, are still driving like it's an urban freeway. In a different setting, I could allow a ten-year old to walk to No Frills to run an errand or pick him/herself up a pop from the inexpensive pop machine there. I'm afraid, though, that I don't let them make that trip (3 minutes from our house!) until the age of 12 or 13. I won't even get started on what it's like to cross at the lights at King St. E and Ottawa...

yea, that's the old Ryerson location from way back in the day being shown on Google. It's a condo complex now.

I realize there are a few push button signal lights in Hamilton, but I still like the X crossings in TO that work EVERYTIME someone pushes the button.

Hamilton was designed around streetcars and walkability, but was destroyed in the 50's-present.

I live a 10 minute walk from the Dundurn Fortino's and will NOT walk there with my kids. It's pure insanity. I will, however walk to the temporary Shoppers location now that it is on the north side (my side) of King.
I've lived 10 steps from York Blvd for 7 years now and have not once used it to walk downtown. I always cut through Strathcona and across Queen, then Bay to get downtown.
I'll jaywalk till the cows come him for one reason - the city gives me NO OTHER OPTION.

can't wait to see the cops ticketing 'jaywalkers' at that location.

"excuse me sir! didn't you see the sign? i'm going to have to issue you a ticket for not crossing at the lights..."

I want to climb up on that Canada Post box with a can of spray paint and cross out "At Locke or Queen".

Get a petition going, start up a group and meet with your local counsellor, tell him it's unacceptable, keep the pressure on until it's resolved.

Bay/Market didn't have a pedestrian crossing either, until someone got hit. It's quite close to Bay/Main and Bay/King.

What does it take, someone's child getting run over?

Unfortunatley it probably will take someone's child getting hit. Pedestrian crossings help but aren't perfect. I cross at the one on Concession at East 22nd everyday on my way to and from the Wentworth stairs. Drivers are constantly going through it or cars turning from East 22nd or the Royal Bank parking lot onto Concession love to take advantage of all the stopped cars without realizing they're stopped for red light so a pedestrian can cross.

these signs are absolutely absurd

who makes these decisions?

First question I have is why is there a 3 lane one way street in the middle of a residential neighbourhood. I get it, Aberdeen is a quick way to get to Bay from Queen Street, but why are any of those streets just one way? The problem may not actually be the signage, it's the road design...