While the type of Roman Catholic church plan used for St. Augustine's only dates from the mid-19th century in North America, the essential components were outlined in 1577.

Two churches in Dundas, St Augustine's Roman Catholic, 58 Sydenham Street, and Knox Presbyterian, 23 Melville Street, are fine examples of Gothic design applied to the specific uses of their respective Christian denominations. St Augustine's was built in 1863 after fire had destroyed the church of 1827. The architect was Robert Clohecy (1839-1918), an architect/builder of Hamilton who worked extensively for the Roman Catholic Diocese of Hamilton.

St Augustine's is Clohecy's earliest church and it conforms to Roman Catholic design practice of the time in Ontario and elsewhere in Canada and the United States. St. Augustine's is a monumental edifice constructed in red brick with white brick used for pointed door and window heads, triangular and round window frames, and blind roundels on the tower (Figs 1 and 2). 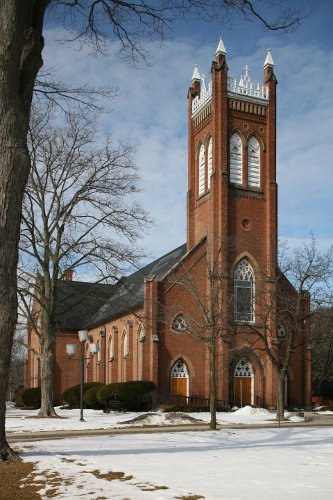 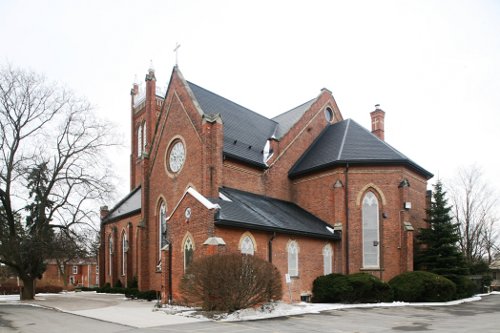 While the type of Roman Catholic church plan used for St. Augustine's only dates from the mid-19th century in North America, the essential components were outlined in 1577 by Charles Borromeo (1538-1584) in his treatise entitled Instructiones Fabricae et Supellectilis Ecclesasticae, commonly known as the Instructiones (now available online in translation).

The Instructiones were intended to be a guide for the creation of appropriate Roman Catholic architecture; the directives within the Instructiones largely dictated the appearance of Catholic churches world-wide until the Second Vatican Council (1962-1965).

According to Borromeo, church exteriors were to be visually prominent, especially at the entrance façade, which likely accounts for the large square projecting tower which dominates the façade of St. Augustine's (Fig. 1).

The façade incorporates three doorways, with the central one to the nave larger than those to the aisles, as prescribed by Borromeo. The choice of the Gothic, or Pointed, style precluded the use of square-headed doorways as prescribed by Borromeo. Yet it is surprising that Clohecy and the patrons of St Augustine's chose to ignore Borromeo's call for a statue of the Virgin and Child on the façade.

As per the Instructiones, church plans were preferably cruciform 'as seen in the major basilicas of Rome'. This is accomplished at St. Augustine's through the inclusion of transepts which project to the north and south adjacent to the polygonal sanctuary (Fig. 2).

For Borromeo, Catholic interiors could include a nave and also two or four aisles. At St. Augustine's, the nave is flanked by single aisles and the spaces are separated by pointed main arcades carried on wooden compound piers with acanthus capitals executed in plaster (Figs 3-5). A blind encircled quatrefoil enriches the wall above each arch of the nave arcade. Taller and wider pointed arches connect the nave and transepts (Fig. 6). 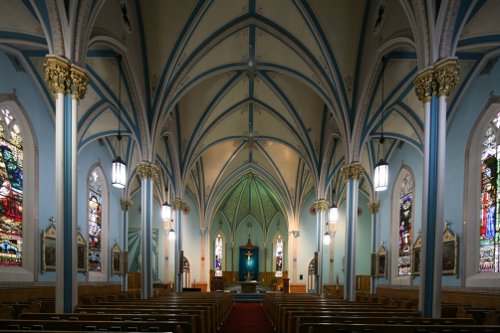 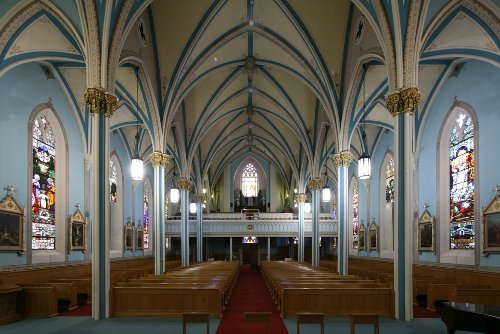 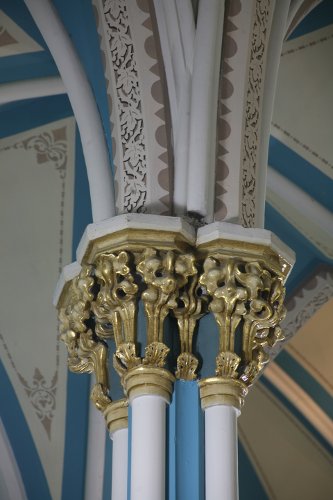 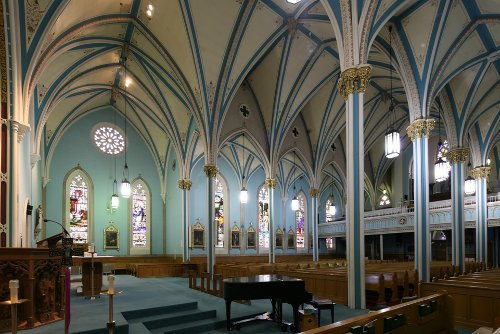 The rib vaults over the nave, aisles, transepts and apse are constructed in lath and plaster, and the junctions of the ribs are adorned with plaster foliage bosses. The sanctuary boss is larger than the other bosses and, in addition to the foliage decoration, it is carved with a chalice in reference to Holy Communion (Figs 7 and 8).

The sanctuary was the most important feature of a Roman Catholic church for Borromeo, which he described in great detail, and suggested that the space must be vaulted (Fig. 7). The lath-and-plaster vaults and bosses in St. Augustine's imitate medieval stonework. 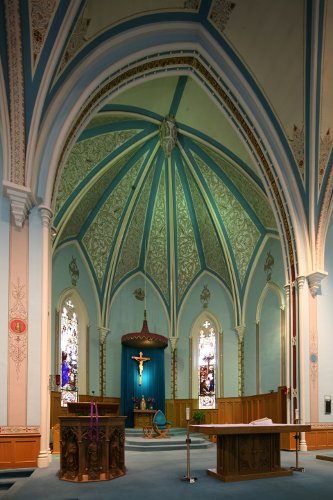 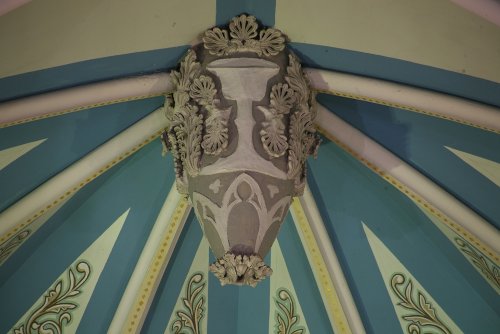 Such 'sham', or lack of truth to materials, would have been unacceptable to the purist Gothic revivalists who followed the True Principles of Augustus Welby Pugin (1812-1852). Thus the interior of St Augustine's is quite different from the Puginian Gothic of St Patrick's Roman Catholic church in Hamilton (1875) by Joseph Connolly, which is constructed with the truthful use of brick and stone and an open-timber roof.

Be that as it may, Pugin's impact in Roman Catholic church design in Ontario was surprisingly small before the arrival of Joseph Connolly from Ireland in 1873. Sacred Heart in Paris (1857) by John Maxwell (1803-1889) adopts Pugin's principles precisely, while the original design of St Basil's, Toronto (1856), by Pugin's disciple William Hay (1818-1888), incorporated an interior elevation executed truthfully in wood.

Yet Hay's interior was subsequently remodeled to the vaulted type of basilica we see at St. Augustine's, probably during the additions and modifications made to the church between 1886 and 1888 by Whitby-based architect, Albert Asa Post (1850-1926).

Whether truthful to materials or not, it seems clear that the three-aisled vaulted interior, like the one found at St. Augustine's, was much in favour for Roman Catholic churches in 19th-century Ontario. It first appears in Ontario in St Mary's Roman Catholic Cathedral, Kingston (1843) (Fig. 9), and is used in St Mary's, Park Street North, Hamilton (1859-1860), by Frederick Charles Kortum (1824-1859) with the interior finished by Zephirin Perrault.

It is instructive to contrast this type of quintessential Roman Catholic interior to William Hay's similarly scaled Grace Anglican Church in Brantford (1856) (Fig. 10). Hay's church has a two-storey elevation that comprises nave arcades and clerestory windows, and is covered with a truthfully exposed open-timber roof. The associations for Grace Anglican are with English medieval churches and contemporary churches in England built in the Gothic revival style as it was espoused by the High-Church Ecclesiological Society. 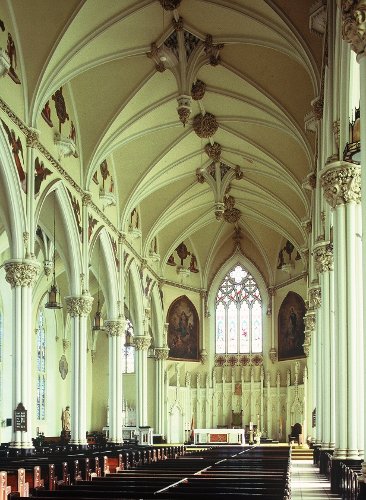 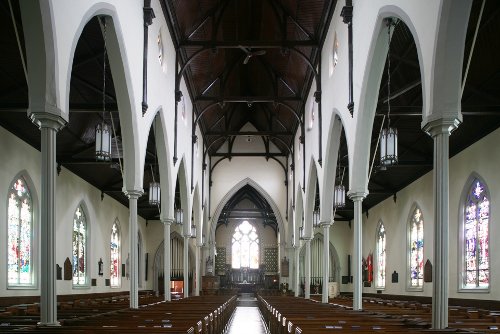 While the Roman Catholic patrons of church building in Ontario were happy to adopt Gothic as the appropriate style for Christian architecture, links to English Gothic models did nothing to promote a specific Catholic identity. Further, while Borromeo discussed nearly every architectural aspect of Catholic churches, he did not deal specifically with style in his treatise.

What was needed for Gothic Catholic architecture was a link to Rome, and this was provided by Santa Maria sopra Minerva, with its Gothic three-aisled interior complete with compound piers and rib vaults that date to the 13th century (Fig. 11). This is the only Gothic church in Rome; however it provided the desirable medieval precedent for the use of the Gothic style in Roman Catholic architecture.

Its style and basic interior formation was therefore likely combined with Borromeo's architectural principles as they were dictated in the Instructiones to produce a basic architectural type that spread throughout Canada and the United States for Roman Catholic church building in the 19th century. St Augustine's, Dundas, is a most successful product of this merger. 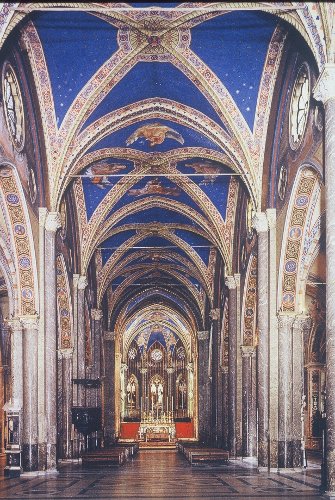 Fantastic piece - thanks for sharing it!

This church looks very similar to the one I attended as a child. https://sites.google.com/site/lasalettecommunity/home
If you go to the above URL you can find a picture of it and see the similarity. LaSalette is no longer a Roman Catholic Church but is available for events.

, Grace Anglican Church My come drown soon if it is closed they are in talks now