I wanted to share a couple of thoughts as I work in that area and see these streets function every day.

First, I would strongly urge that we simply convert them both to two-way traffic along their entire length, instead of debating whether to do only the portion between Delaware and Main, or possibly King. 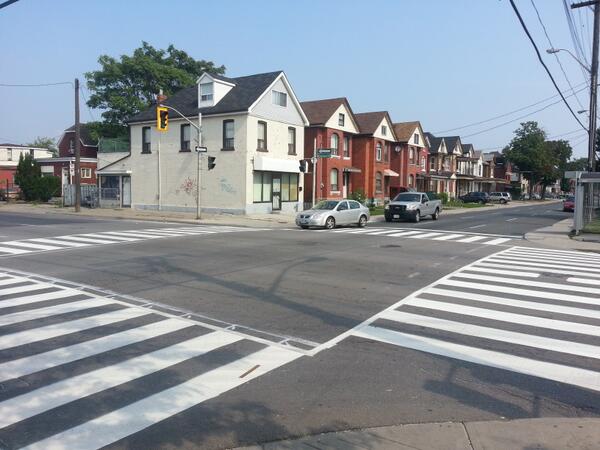 There is no need to remove the bumpout. Here is a view looking north on Wentworth at Delaware: 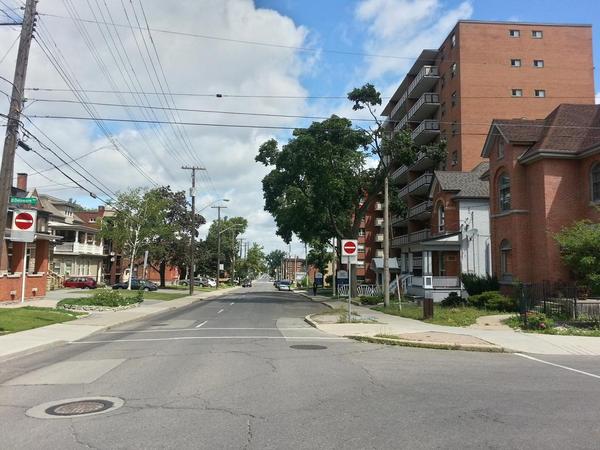 Two full lanes already exist. Not only should we not remove the bumpout, but we should also look at adding similar treatments at King, Barton and other potentially high-conflict streets.

This type of traffic calming is an integral part of complete streets: by narrowing the distance pedestrians have to walk to cross the street, by forcing drivers to slow down to turn corners, and by permanently bookending the curbside parking so drivers can't use it to fly past other cars.

Here's how Lansdowne Avenue in Toronto, a street that actually does have traffic volumes to contend with, looks after a recent complete-streets renovation there: 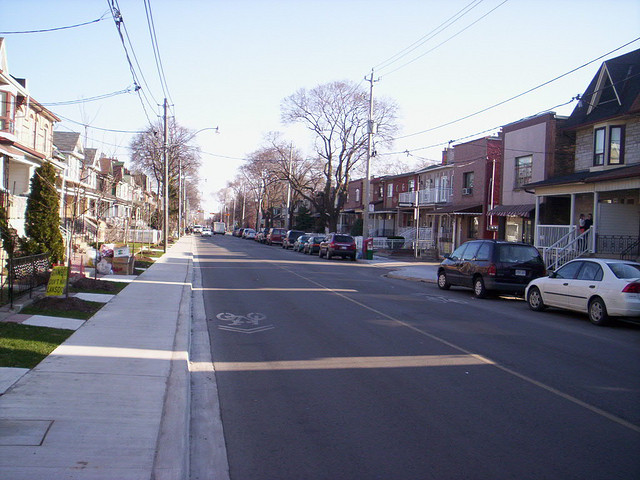 Given the massive pointless gap that they incorporated into the Hunter Street bike lanes, it wouldn't surprise me in the slightest if they cut this down to just Delaware to Main. Although the traffic planning department at the city is starting to wise up, they still seem to be a huge fan of pointless baby steps that defy common sense and taking shortcuts when things get even slightly complicated or might inconvenience motorists slightly.

We might see the rest of the street from Main to Barton by 2025 though, in time for the LRT.

I love how Victoria only gets considered for 2-way conversion after a potential developer requested it. Constituents like the DNA want their streets converted two-way? Nobody cares. Industrial developer asks? Sir yes sir!

Ditto for Caroline St N. And in that case, another horrible conversion. We could have widened sidewalks, planted trees and added more future patio space for future developments and current Vranich developments. Instead we make it 2-lanes one way and 1-lane the other. For hardly any traffic.

Carolines' a particular stinker for me because as a driver it's demonstrated how easier it would be to get around these city side-streets with 2-way conversion. I used to have to do crazy Hamilton loops to get to Vida la Pita (I have a weakness for their felafel pitas). Now I just go the "wrong" way up Caroline from Main.

The only downside for the conversion of every side-street in the city would be the short-term cost of adding the facing traffic signals, and the upside would be better wayfinding and safety for the whole city. It wouldn't put a scratch in traffic on streets like Hughson and Caroline (streets that barely have any traffic) and yet city staff treat this issue like something the cat left on the front porch.

Hear, hear! Wentworth is a pointless one way--perhaps not as ridiculous as, say, Hughson, but quite pointless all the same--, and it has the (unintended) byproduct of diverting a lot of northbound through traffic onto residential side streets like Grant Avenue.

But let's be realistic. I have an eleven year old son. Wentworth has been "scheduled" for two-way conversion HIS ENTIRE LIFE. And now they are talking about possibly considering a discussion of the potential merits of possibly thinking about maybe weighing the pros and cons of some day thinking about eventually considering the possibility of marshaling the evidence in favor of converting two blocks of the street. Ambitious City, indeed!

How about King and Main? At night these one-way streets resemble a ghost town.

Lets get rid of all these one way streets (with a few exceptions) as they make the dt look dark and desolate at night.

And I'm talking full conversion to two-way. Not three lanes going east and one lane going west for two blocks like it is on York street. What purpose does that serve? It only adds to the confusion.

The era of Hamilton needing one way streets to get people to and from the steel mills is over, especially now that the RHVP has been built. But we have too many councilors still living in that era (like Bob Bratina and Bob Morrow, can't they find somebody younger with new ideas than this antique?) who think that the steel mills will employ 50K people again.

Everyone knows this. Just a few dinosaurs at city hall who want to roar back to the burbs everyday after work holding back the entire prosperity and safety of the city.

Where's the lack of comprehension? The response does not imply that all of them are dinosaurs, or that it's just one. Thanks for your time though. It was totally worth it.

I live on Victoria Ave North. Three months ago my fiancé was hit by a truck while crossing at Wilson Street. A few month prior a car ended up on my front lawn here too. Countless occasions over and over there have been SERIOUS and OBVIOUS safety problems with this layout. I would LOVE to speak my mind at the next community meeting about this.

My fiancée suffered a head injury and internal bleeding. She had a skull fracture among other concerns and we now are helping her through rehabilitation. Feel free to contact me in regards to this concern christopherspark@gmail.com . I would love to change this area for the better before more issues occur.