Despite a flawed poll and a year long misinformation campaign, Hamiltonians are still split down the middle on LRT.

Obviously, it would have been better, given the ten years of planning and $70 million already spent or committed if the poll showed a majority respondents supported LRT. But the reality is that the poll didn't give important background information (e.g. that province was paying 100% of the capital costs, that Council had asked for the funding, and that much of the money would go to infrastructure upgrades). And respondents self-describing as 'informed' about LRT doesn't really mean much, given all the misinformation being spread by anti-LRT councillors and suburban newspapers.

We mustn't forget that during the extensive public consultation period in 2009-2011, over 80% of Hamiltonians were in favour of the LRT project when they were actually told about the project and why Hamilton was doing it.

In this case, I agree with the Mayor: given all the misinformation and the claims by the anti-LRT Councillors that 'no one' supports LRT the fact that 52% are in favour or undecided is not so bad. You really can spin it either way.

Nevertheless, Waterloo region pushed on despite the controversy because they understood why they needed LRT. Today people in K-W are very excited about their nearly completed LRT. I predict that a similar poll a year from now would find a strong majority glad they built it (even though, unlike Hamilton, they have to pay about 1/3 of the cost).

In fact, I don't know of any community that's decided it was a mistake to have built LRT. To the contrary: communities almost invariably start working on extensions immediately after the first line is operational!

It's also important to remember that only 4% of respondents were aged 18-34, while 69% were aged 55+. It is very difficult to correct for such a large sampling bias, especially given that 94% of respondents were contacted by landline. (The Ipsos-Reid poll in Kitchener-Waterloo that I linked to above established "quotas based on age [...] to ensure proper age representation across the sample", an important step that was notably not taken here in Hamilton.) 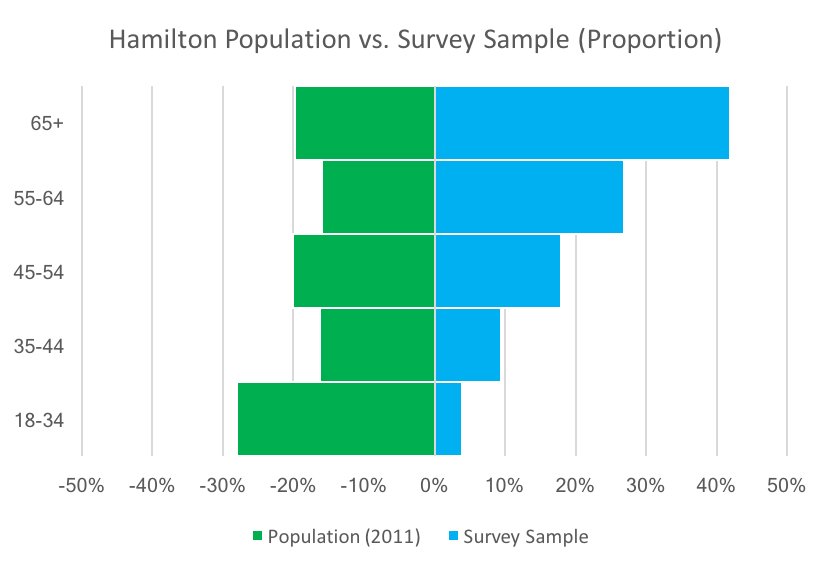 We should be paying particular attention to the desires of the younger, working, population of Hamilton. The fact that those under 55 tend to support LRT more than older residents is a strong argument in favour of LRT: remember that we're building LRT for the future and this shows the future wants it.

A city that ignores and alienates its younger residents is a city without a future!

I will note this before Jim gets to it.

The Calgary LRT line was often cited as a major mistake and example of doing things wrong.

I know RTH already has some articles on it, I was going to link the article, but apparently there are quite a few and I'm not sure which one is the best to go with.

Which line is the one you mean? They have three LRT lines, each increasingly successful, and are building a fourth (the Green line, more ambitious than any yet) due to the high public demand. Calgary pays for a pile of this itself (one-third of the total capital cost) because of how good and popular the system is.

Too much info floating around in my head. It was the Buffalo LRT. Ryan was on twitter refuting a claim that LRT was bunk because of Buffalo. ( http://twitter.com/RyanMcGreal/status/85... )

Here's the link I was thinking of: http://www.raisethehammer.org/article/18...

Do YOU have a source for the landline-only claim? The report from Forum (which is here: https://www.scribd.com/document/34541698... seems to indicate the opposite but is vague. So far I have seen this claim repeated several times; I've asked everyone I've seen for a source, but no one has come up with one except for other unsourced reports.

Thanks. I appreciate that. Since she has specific figures she must have sourced them somewhere.

It was landline or cellphone. Personally, I was expecting it to be much worse for the 'pro' side than it was. At the end of the day no one can use these results to justify anything other than encouraging the councilors that have the real power to look at the real data and experiences in other communities with LRT.

I couldn't find a definitive source, but this (older) report said that Forum uses landlines:

The methodology favoured by Forum has also favoured what it considers to be the more typical actual voter — older, male, suburban plus more likely to be reached via landline — even though the results are then weighted against the overall population.

I was going on this, the fact that I know several people who were called (all by landline), and other commenters who claimed this was a landline poll. Also the extremely low response rate from 18-34 year olds and high response from 65+ suggests a landline, or at least primarily landline, poll.

However, I just noticed that the CBC report says that the survey used both landline and cellphone, but doesn't give the breakdown or a source.

The survey was conducted by Forum Research, Inc. via landline and cell phones between March 30 and April 4. Forum says its margin of error is plus or minus 1.7 per cent 19 times out of 20.

On the other hand, a global news story says that only landlines were contacted:

The poll was commissioned by nine city councillors and surveyed more than 3,300 Hamilton residents by landline between March 30 and April 4.

I will ask to have the article modified to say it is unclear if cellphones were also called, and if they were what proportion of respondents were contacted via cellphone.

Sam Cragg at CBC Hamilton reports that it was 96% land line, 6% cellphone.

This kind of no-findings poll is why we elect representatives--they are supposed to cut through the competing interests and make the right choice for the City as a whole, not specific communities of interest or their political careers. However these kind of polls are fantastic for burning through other people's money, and diffusing responsibility for self-interested decision-making.

This is actually good news from an LRT perspective. Selling fear, nonsense and false claims is way easier than selling the merits of a project. Yet, even with councillors actively doing that for years, the poll results are pretty close. Terry Whitehead previously said 90% of Hamilton residents oppose LRT. To see a poll conducted via land-line to basically the 55+ age bracket, come back 48-40 is remarkable.

I live and work in Hamilton, don't have a landline and kept my Toronto cell number because... why change it?

Guess I was ineligible to be polled. My guess is most university students were likewise ineligible.

People who are against LRT often bring up Buffalo, what's interesting now is that, Buffalo's LRT system is seeing an increase in ridership due to the increase of downtown development. Not stellar ridership but improving.

I am an LRT supporter and the results of this poll are depressing on the surface. It makes you wonder how the Mayor and the pro-LRT Councillors have managed to let things get away from them.

Even with weighting there seems to be a few flaws with this poll.

Seriously? Makes you wonder what result this poll was designed to produce.

According to CBC Hamilton article: "Merulla said there were three more key questions he wanted included in the survey, though ultimately they were not: firstly, do they know 80 per cent of the construction costs goes toward renewed infrastructure?

Second, do they know this is just the first phase of a bigger transit project? And third, do they know that the $1 billion is non-negotiable, and would go to another Ontario city if turned down by Hamilton?

"If those questions were included, it would be a landslide," Merulla said. "It would be 80/20 in favour. The fact that we're within striking distance is a huge victory, considering.""

Why were these questions not included? If the poll design has as many flaws as it seems, and if Merulla and other pro-LRT Councillors were not able to influence the design or content of the poll, why did they not run their own poll that would have delivered results the same time this poll was released. Either it would have confirmed the results or not, but we would be closer to knowing the real answer.

Interesting headline. Here's another one: "60% of Hamiltonians oppose or are undecided on LRT." Why is my headline any less legitimate or, indeed, arbitrary?

I don't agree with you often, but I do here. Definitely an intentionally screwed title. The CBC did the same thing.

That said, now that the breakdown is out, I think it's evident that this poll is worthless anyway. The demographic breakdown is important for long term plans such as the LRT. The sample size of the people who will actually use this thing and pay for it, was minuscule.

Both headlines would be equally valid. As I explain in the article, the main point is that Hamiltonians are divided and the poll results can be interpreted either way given the fact there is no strong majority either way.

But given the inherent biases in the poll and those who set the questions, the misinformation campaign being waged by some anti-LRT individuals and groups, and the lack of context given in the questions, the results are not bad for the project.

It is interesting that Waterloo's poll found almost exactly the same split, but they nevertheless went ahead and seem very happy with the results so far, by and large.