Instead of helping to stem the tide of hatred, Canada's Conservative leadership at all levels is actually enabling and pandering to it.

Canada, we need to talk about stochastic terrorism.

The term "stochastic" means a process that occurs according to a random distribution. Conventional terrorism is determined, planned and executed by people working together within an organization to carry out a plan. In contrast, stochastic terrorism is what happens when reckless politicians issue general public incitements to violence against a targeted group of "enemies" - e.g. immigrants, liberals or journalists - and a disturbed "lone wolf" individual hears the message and decides to act on it.

You can't analyze this kind of incitement and predict exactly who the message will reach, but you can predict that statistically, the message has a significant chance of reaching someone who will decide to act on it.

We have a chilling example from this very week, thankfully averted, of attempted stochastic terrorism across the border:

Only days before, President Trump had demanded "retribution" against those in the media who criticized him.

Hasson seems to have heard President Trump's call for "retribution." Almost every figure on Hasson's kill list had been singled out by President Trump for threat or abuse.

'Roll Over Every Liberal Left'

Also this week, but in Canada, Conservative Senator David Tkachuk addressed the "United We Roll" pipeline protesters in Ottawa and told them, "I want you to roll over every Liberal left in the country."

When a politician says something like that to a protest rally that includes significant numbers of people who are paranoid and racist, the chance that one of those people will take the message literally and carry out the order goes up significantly.

Michael Wernick, Clerk of the Privy Council in Ottawa, just warned Canadians that such statements have consequences: "I worry about the rising tide of incitements to violence when people use terms like 'treason' and 'traitor' in open discourse. Those are the words that lead to assassination."

Disturbed, Radicalized and Ready to Act

The important point is not, as some people have argued, that a reasonable person knows Senator Tkachuk is speaking rhetorically. The point is that there are a lot of unreasonable, disturbed and impressionable people out there, and they have already been radicalized by the hate-laundering right-wing media ecosystem.

That is to say, we can't predict who specifically will be motivated to violence by such a rhetorical incitement, but we can predict that such statements have a significant chance of being taken seriously by disturbed individuals who have already been radicalized.

And we are responsible for the predictable consequences of our actions. 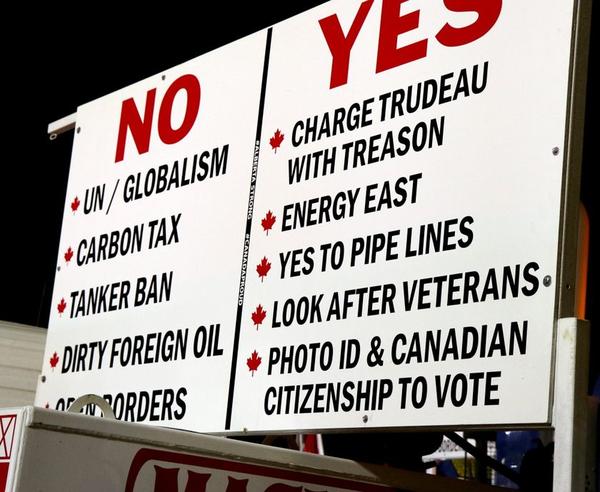 The Canadian Anti-Hate Network has documented a shocking pattern of racism and sectarian violence from the group, which is closely tied to the "Yellow Vests Canada" hate movement.

Their paranoia about mythical unsecured borders and a "globalist" United Nations agenda is fueled and abetted by the very leader of the Conservative Party of Canada, Andrew Scheer, who shamelessly misrepresented a recent non-binding UN compact among countries agreeing they wil need to work together to manage flows of migrants more effectively.

Far from disavowing the extremism in his party's tent, the Conservative leader and Prime Ministerial aspirant has been pandering to the convoy - which prominently features a call to charge the current Prime Minister with treason.

Scheer has been deliberately helping set the table at a buffet of paranoia, hatred and extremism, a movement that includes overt white supremacists like Faith Goldy, who spoke at the same rally as Scheer.

Right wing extremist organizing and violence have been increasing in Canada for the past several years.

The violence and civic self-immolation that we have lamented in other countries is now in our very midst. Instead of helping to stem the tide of hatred, Canada's Conservative leadership at all levels is actually enabling and pandering to it.

It is only a matter of time until another stochastic "lone wolf" radicalized by the right-wing fever swamp will pop up and carry out more of the violence that the leaders of today's Conservative movement have been shamelessly enabling.

Yes, this is exactly how people like Alexandre Bissonnette were convinced to shoot up innocent people

This has a long history. Including the murder of Thomas a Becket on December 29, 1170 by knights inspired by King Henry II’s words: “Will no one rid me of this troublesome priest?”

Where were you when the Adam Vaughan said Doug Ford should be whacked? When BLM chanted pigs in a blanket fry em like bacon? When Kathy Griffin called for the doxxing of high school kids? It cuts both ways and you only calling out the right only makes it worse.

Nobody actually "whacked" Doug Ford. Yet Dudley George was murdered by the Ontario Provincial Police after Mike Harris (channeling King Henry II, but without the class) told them to "Get the fucking Indians out of the park."

By all means, condemn everyone who engages in this sort of incitement. But today it tends to be a right-wing phenomenon. Even the Communist Party of Canada has given up calling for violent revolution.