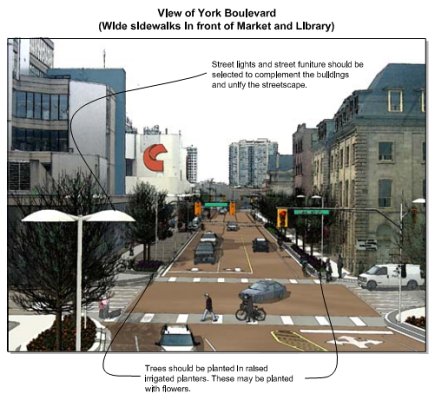 Staff summarized the citizen feedback from the November 2008 sessions in the following five points:

Based on this feedback, staff developed their final concept, which incorporates bike lanes (subject to the Cycling Master Plan Update), wider sidewalks, urban braille, street furniture, landscape planters, trees and hanging baskets, and the abililty to close the street for large special events. 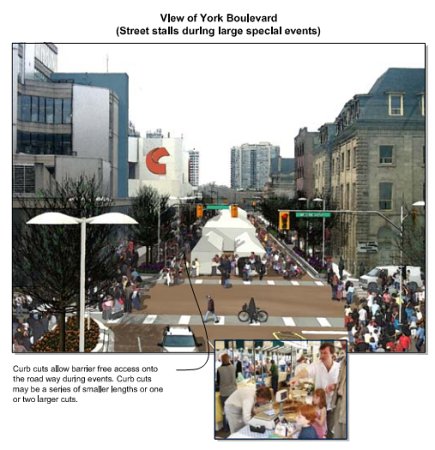 You can view the final concept as a PDF.

Combined with the city's Farmers' Market / Central Library renovation concept, this should prove to bring new vibrancy to a downtown block that has tremendous potential (the P word again) but is currently hampered by a hostile public environment next to a multi-lane one-way thoroughfare.

The final concept has done a nice job of incorporating citizen feedback into the original three concepts - like the inclusion of bike lanes - and offers great flexibility of land use for the Market to take advantage of nice summer days or special events.

All in all, this may well turn out to be a real showcase for urban revitalization.

If you have any comments on the final concept, you can send them to Khaldoon Ahmad, the urban designer in charge of the master plan.

looks great! I'm not a huge fan of the 3 eastbound lanes re-appearing east of McNab in order to maintain the current traffic flow...it's reminiscent of the pseudo two-way conversion they did on James South a few years back. All in all, this looks great though. The wide sidewalks will be tremendous. Reason for no trees on the south side as far as I understand is to keep the area clear for the multiple uses that can take place there - the sidewalks are wide enough to have stalls every weekend, even without closing the street...then of course, is the option for a full closure and it's various setups. Granted, trees don't take much room and probably could be incorporated, but there trees proposed at the market entrance and library entrance and tons of them proposed for the north side.
They might re-think this though, especially with tables and eating areas outside...it can get pretty darn hot sitting out in the sun in the summer.

I don't know the reason for no trees on the north side back by Bay St. Maybe they just didn't focus on that stretch.

IF this turns out as good as it looks on paper along with the market/library renos, it really will be a great example of reclaiming a drab, ugly urban environment and turning it into a vibrant people place. Kudos to all involved.

It's a shame to see the loss of the positive features you mentioned as being parts of earlier proposals, but maybe they exceed the city's capacity for change. Better to accomplish things through small steps, see them done and enjoy them and later upgrade them again. On the whole the plan is an improvement over existing conditions.

As an aside, looking at the pix above, it occurred to me as I'm sure it has long ago to brighter folks, that "scramble intersections" might work well with two-way bike traffic on centre-lane boulevards when returning some of our cross-town expressways to community use.

The City really did a good job on this one. The renderings look fantastic. If it weren't for the horrible concrete design of the library and farmer's market, I'd say that looks like a street right out of Paris, NYC or Toronto. King St. could look like this too, as could Main St.

Yay cycling lanes! (I wonder if they'll extend them East to Sherman and West to Dundurn)

And so the plan is to bring York Street back to what it was prior to 1950, a People's Place.

Brendan, bike lanes could be added on York from Dundurn to Bay overnight without adjusting a single traffic lane, so I hope we'll see that change made soon. Wilson (as it's called) from James to Wellington is undergoing a streetscape master plan next year which will convert it to two-way. I'm going to assume that they will extend the bike lanes to Wellington at that time now that they've decided on bike lanes for the market district. that was the first thing I thought of when I heard that they had decided to scrap some street parking in place of bike lanes. Now it's very logical to extend it east and west from there.

Considering the street's various limitations, I think this is a lovely design, and I look forward to the many changes it will bring to the Downtown. Downtown needs people and this is a great start to bringing people. The designs by the City have something for everyone. Cyclists, drivers, and people are all considered. I am also excited about the changes to the Market and Library and festivals will be fun. BTW, the new concept does not show a 'scramble', yet at the public meeting on Thursday, Bratina appeared shocked by the news and said that he would see that these be added back.. Let's hope.

What a positive growth. It harkens back to pictures from "Lost Hamilton" when the outdoor farmers market was there. Also, I wonder what the plans will be for winter? That seems to be the time when everything in this city dies, but if you look in places like TO, Montreal and QC they are booming times. Maybe that is a bit much of a comparison.