There's no doubt about it, history is cyclical. Those well versed in history see the proverbial writing on the wall. Unfortunately, those who choose to remain ignorant, or perhaps worse, those who believe they are untouchable, can set the world on a path that is well worn, all too familiar, and often dangerous.

On July 29, the curtain went down for the final time on the Hamilton Fringe production Langston Hughes vs. Joe McCarthy: Is Poetry Subversive?

Set at the height of McCarthyism when, as director Ronald Weihs writes in his director's statement, "There was a massive effort underway in the United State to communicate a crude vision of 'The American Way,' and to brand ideas 'Un-American.' People were taught to be frightened of their own thoughts, to repress them or keep them hidden."

During the 1920s and '30s, Harlem became a beacon of hope for freedom of expression to African American scholars and artists. This new found voice was demanding civil liberties and political rights. Hughes was an integral part of the Harlem Renaissance which gave birth to jazz poetry. It was this poetry that would make Hughes a person of interest.

On March 24, 1953 James Mercer Langston Hughes, African American poet, social activist, novelist, playwright, and columnist was called before the Senate Permanent Subcommittee on Investigations. And, so the play begins.

Hughes never denies his writing has political references, but maintains those references, "would mean many things to different people."

Instead, Hughes takes every opportunity to school his interrogator on the true meaning of free speech - a lesson the current US administration desperately needs to hear.

The actors were symbiotic feeding off the energy and lines of each other. In a controversially creative move, Jerome's character eventually joins Hughes in a back and forth recitation of his poetry.

The play ingeniously weaves together officially transcripted words with 18 of Hughes's poems, dance movement, music from the Harlem Renaissance and continuously changing large screen photographs from both the depression and McCarthy eras.

This fluidity of symbolism and movement enhanced the audience's understanding of the times and issues. Each time Hughes launched into one of his beautiful poems accompanied by dance movements, the prosecutor froze unable to move or interject.

This lack of restrictions gave the audience insight into the workings of Hughes's mind and the freedom his words afforded him and his peers.

The symbolism trapped in the images on the screen are not lost on those who see the disparate inequalities embodied by the 'American Dream.' With words Hughes tells us that 'your America was never my America,' while the pictures tell the story of the African American experience.

Deeper than that, the pictures also tell the story of poor white families downtrodden by a capitalistic system working in tandem with a government intent on suppressing social justice initiatives like the rise of unions, descent wages, and social safety nets. The common goal is simple, divide and conquer the common worker.

Through his testimony, Hughes makes it clear that language does not have universal meaning. Instead, it is open to interpretation based on lived experience, indoctrination, values, beliefs and historical context.

A tree may symbolize life and giving to one person, while it may embody violent lynching and death to another. The American flag blowing in the wind may represent freedom and prosperity to some, but it definitely means oppression and poverty to a huge majority.

Langston Hughes vs. Joe McCarthy is a commentary on the dangers of the nature of ideas. The greatest threat to the status quo is not the fear of physical violence or ideological uprising. The fear is of education. The fear of an individual educating oneself, rising above ignorance, and being able to challenge the oppressor on the same intellectual plane.

Hughes shows us that true empowerment is intellectual not physical. You can't smash an idea with a hammer and you can't destroy an ideology without the intellectual tools to deconstruct it one bad idea at a time.

Langston Hughes vs. Joe McCarthy is very much a play for today. The idyllic image of the happy suburban Canadian family is deservedly under siege.

Intersecting movements like Idle No More, Black Lives Matter, and the LEAP Manifesto are maintaining and gaining momentum at a time when governments appear determined to undermine their credibility through media and government slander and bastardization of their motives in a way eerily reminiscent of those portrayed in the play itself.

It's time for Langston Hughes vs. Joe McCarthy to tour the country. 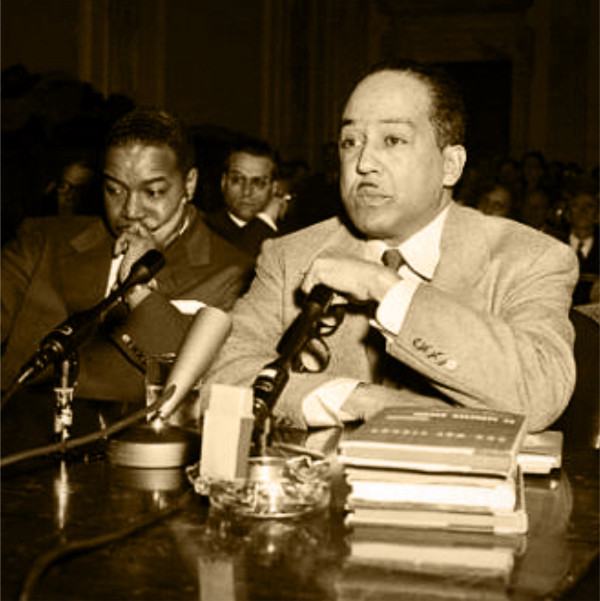 Thank you for this very thoughtful review. You have caught the issues very well, and shown great understanding of our intentions in creating this production. I'm glad that it succeeded for you. Much of the credit is due to the performers, Howard Jerome and Learie Mc Nicolls. As always in the shows that I direct, the work is shaped by what the players can offer, and Howard and Learie brought a huge amount to the work. In a previous staged reading, the poems were read by spoken-word artist Tamara Buckland, who did an excellent job. However, this approach meant that the poems were detached from the artist who created them.

This time, we decided that the conflict should be one-to-one, the Interrogator and Langston Hughes. This choice put a huge responsibility on Learie, who had to establish two realities - the poet answering questions, and the internal creative spirit embodied in the poems. Learie's dance abilities were the breakthrough that allowed these two realities to be differentiated, and soon we discovered that Howard's character could also break free and participate in this second level of reality. Needless to say, it was a great pleasure and opportunity to work with these two artists.

We would like to take this show on the road. We'll see if we can make this happen. Your incisive review will certainly help.