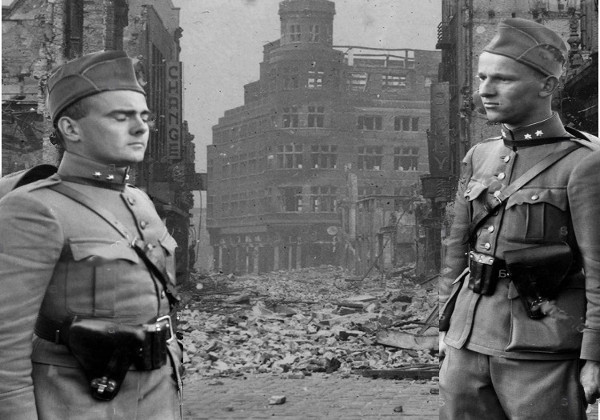 The premise is a simple one. Two men, Pieter and Victor, living in Nazi-occupied Holland, are faced with a choice. They can report to the headquarters of the new regime and fight for Hitler, or they can join the resistance.

Pieter leans towards Hitler, and Victor towards the resistance. Pieter is an idealist who believes the leaders can't be as bad as their worst rhetoric. His friend Victor is a cynic who expects the worst of leaders.

The play is fueled by the consumption of Dutch Beer, which reminds us a) that each man loves his country and would have been much happier if the Germans hadn't shown up, and b) that alcohol blurs the line between polemic and emotion.

A dialectic drama in which two men in a room argue politics and ethics requires actors who can increase the tension slowly and steadily, and maintain our visual interest with nuanced physicality. Campbell and Thomson are excellent in demonstrating how important our choices are to immediate problems and, as we'll learn, as an example to future generations.

I want to avoid spoilers, but I'll just say there's a mid-performance twist that's stunning in its simplicity and effectiveness.

Our collective attitude to Hitler's Germany has been simplified by hindsight. The larger injustices, as the play makes emphatically clear, are still with us.