During March break we left the damp grey of Hamilton for the crisp sun of Saskatchewan.

My parents live in Saskatoon on one of three blocks that form a triangle, with each street backing onto the other two, thus: 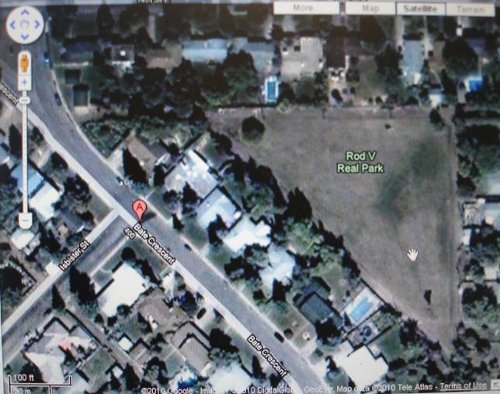 The layout leaves a sizable gap delineated by three alleys and that seems to have left the developers scratching their heads over where all this extra space came from and what they should do with it. 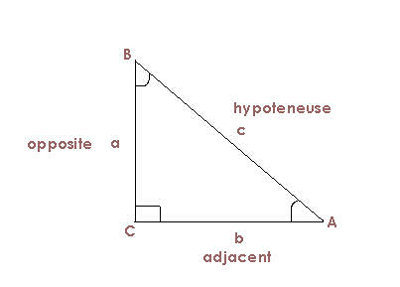 For a place of zen-like emptiness you can't do better if you want to achieve the ideal of "no-mind." 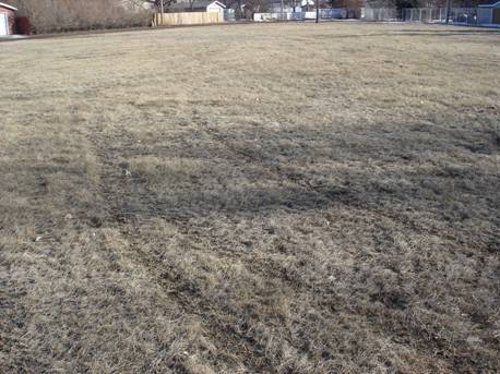 since by comparison the famous rock garden in Kyoto could almost be described as "cluttered", 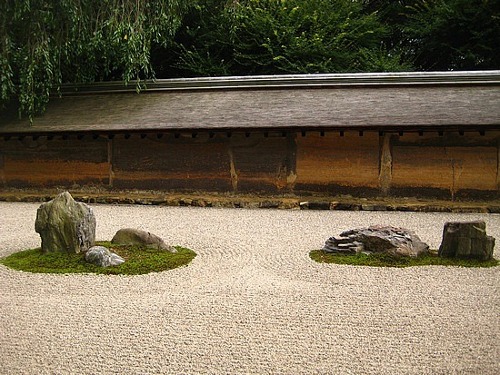 and more suited to the lost souls who foolishly cling to the materialism of this world.

These spaces are everywhere in Saskatoon, and the municipal solution is to throw down some grass and give the field a name. There is no public stretch of grass in Saskatoon, however small and empty, without the designation of Park.

The triangular space in question is Rod V Real Park, which sounds like the tag of a Saskatchewan hip-hop DJ, and I fully expected to see it occupied by someone with an MC ROD V. REAL T-shirt, pushing turntables and rapping to an impromptu conglomeration of Saskatoon "thugz."

It didn't happen. Although guys in Big Trucks come onto RVRP, and race around in circles and leave deep ruts. 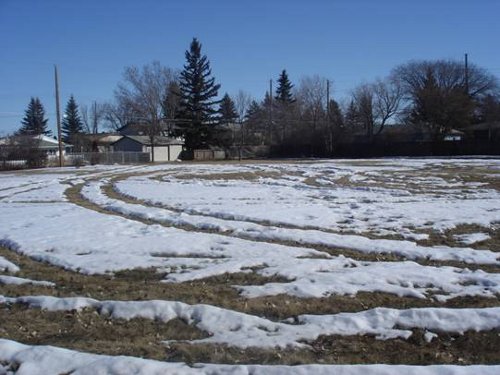 Each corner of RVRP boasts a tree. 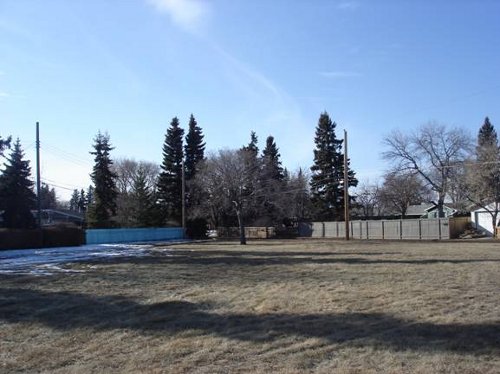 North East (90 degree angle and note that the tire treads don't just cut through the snow, but dig well into the earth below, giving the terrain what sculptors refer to as "surface") 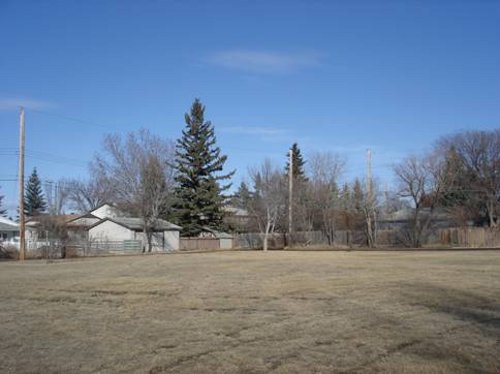 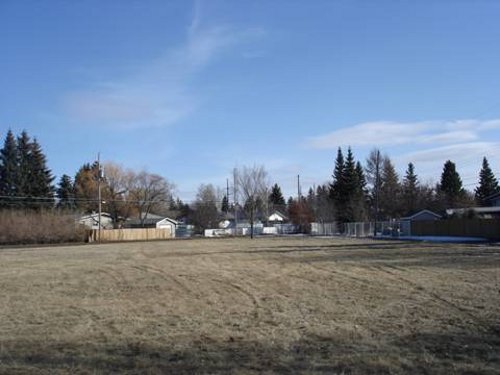 I realize I've given RVRP more exposure than you think it deserves, but if you've read any of my essays you'll understand that me being dumped next to so vast a negative space is like a low level pornographer being airlifted to the dark locale of a favourite fetish, and just left there for a week with a digital camera.

Here's a photo of me in GARAGE at the Saskatoon downtown mall. I'm not usually vain enough to include images of myself, but I sat here for what felt like hours while my daughters tried on teen clothing.

You'll note I haven't taken off my sunglasses, partly because even indoors the intensity of Saskatchewan light will do retinal damage to eyes accustomed to Hamilton's non-light, and partly because I have every reason to want to just zone out.

If you'd formed a mental portrait of me and never imagined I was so small, that's an illusion. The woman behind me isn't real. It's one of those 20 foot posters of a model. 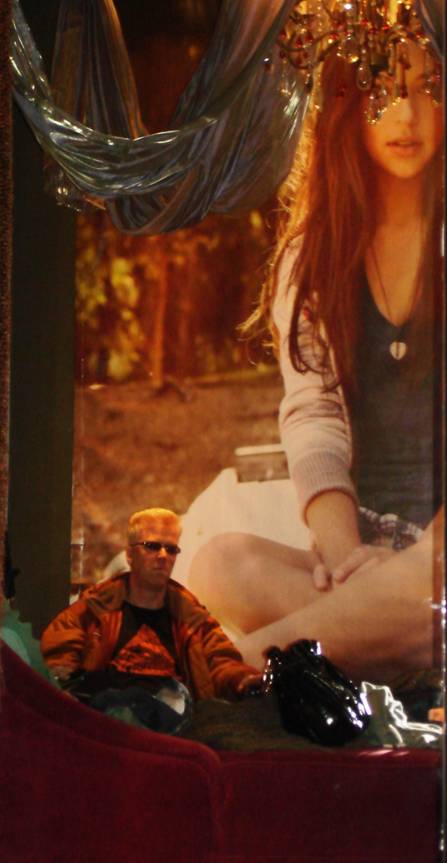 I'm wearing my Acid Mothers Temple T-Shirt, which I bought from Kawabata Mokoto himself at the Horseshoe in Toronto, and despite this hipness being, I'm sure, lost on pretty much all of Saskatoon you can tell I'm feeling pretty smug.

My partner Jennifer took the picture. Having several thousand fewer hours than I have taking illegal photos, she didn't escape being caught by the young saleswoman.

With that anxious ambivalence of having to enforce a company policy but also not wanting to lose sales, the she ran over and with a lot of wringing of hands said, "You're actually not allowed to take photos in here."

I want this for my author photo.

Seeing My Paternal Grandmother Who Is 96 And In A Home

I arrived at dinner time. 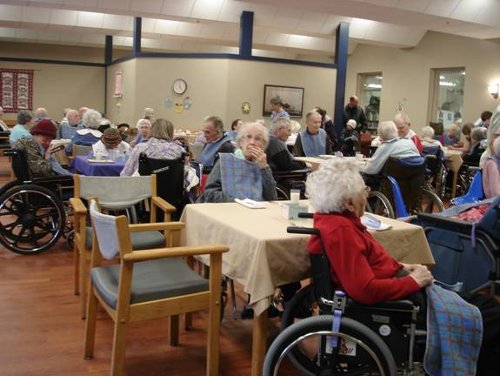 Sure, it's a very different vibe to GARAGE, but I wouldn't say I found one preferable to the other. Dinnertime at the home reminded me of the opening lines of "The Old Fools" by Philip Larkin.

What do they think has happened, the old fools, To make them like this? Do they somehow suppose It's more grown-up when your mouth hangs open and drools, And you keep on pissing yourself, and can't remember Who called this morning? Or that, if they only chose, They could alter things back to when they danced all night, Or went to their wedding, or sloped arms some September? Or do they fancy there's really been no change, And they've always behaved as if they were crippled or tight, Or sat through days of thin continuous dreaming Watching the light move? If they don't (and they can't), it's strange;

Why aren't they screaming?

Despite not quite being able to put her picture of the world within a younger-person's frame of what's real, grandmother is, I believe, happier than many people in this situation, It was great to see her.

I bought Gummy Frogs at the Saskatoon Superstore and brought them home for my daughters. 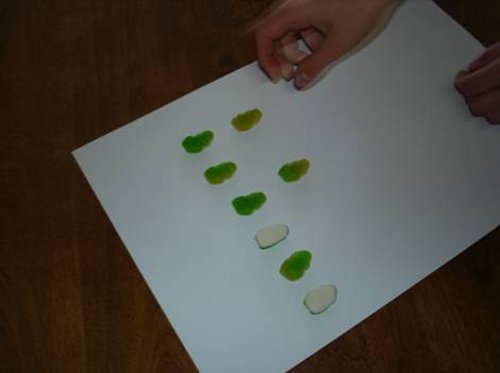 What's weird, and strangely what makes them more froglike is that they're all slightly different shades of yellow-green, as though they got different spurts of food-colouring or else some faded-out more under the Saskatchewan sun based on where each one sat for three years in the bin.

Disappointingly, no delectable flavour of cuisses de grenouille is to be discerned. These delicacies are not for the weak of tooth (e.g. Those pictured in the photo of seniors dining, above.)

My father is a landscape painter and sometimes gives paintings to his brother's family. 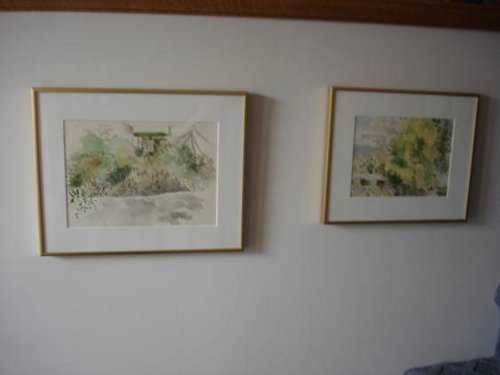 You'll note that the one on the left is upside down. 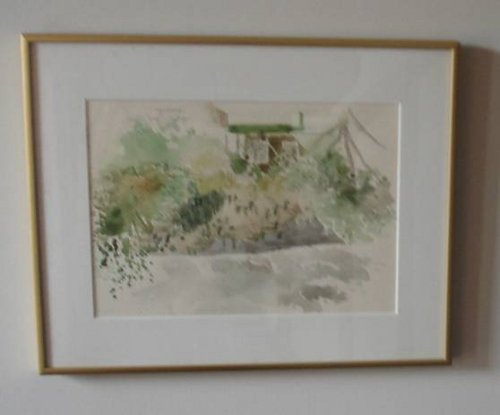 The following excerpt is from a 1996 essay by David Foster Wallace based on his experiences on set of David Lynch's Lost Highway.

...[S]ome paintings by David Lynch's ex-wife...are stacked canted against the wall of Mary Sweeney's office downstairs. It's unclear whether Lynch owns them or has borrowed them from his ex-wife or what, but in Lost Highway's first act, three of these paintings are on the wall above the couch where Bill Pullman and Patrician Arquette sit watching creepy invasive videos of themselves asleep. 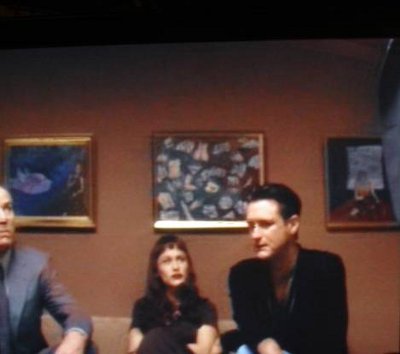 And you'll be even more chilled in a later interior scene in Bill Pullman and Patricia Arquette's house, a post-murder scene, in which the same three paintings hang above the sofa but are now, without any discernible reason or explanation, upside down. The whole thing's not just creepy but personally creepy.

For me having one picture the right way up and the other upside down - similarly pictures by someone I know well - is almost worse than having them uniformly upside-down.

And I awake from dreams of unspeakable events for which these paintings are props on a back wall.

When we visit Saskatoon we always drive down as a family to see the relatives in Regina. It's a tradition that we stop at the A & W in a town called Davidson.

Here's a photo I shot from the window of the A & W.

One day those light standards just arose and moved like sentinels onto the patch of earth that is Davidson, and since that day have cast a cold eye on the limitless expanse before them.

If you think late winter in a middle-income postwar development in Southern Ontario is depressing, fly to Regina in March, drive down Broad Street, turn onto Broadway, park at the Liquor Store and stand and drink in the vista around you. Wherever you live, you'll have a new appreciation for it. 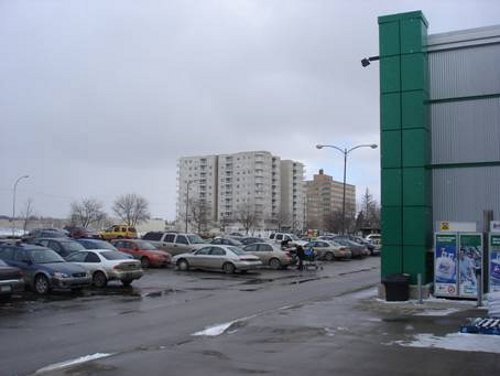 This was the best view. The other photos I took didn't really have anything in them.

I should add that sometimes Regina can be described as pretty. Mid-summer. Particularly around the Legislative grounds. 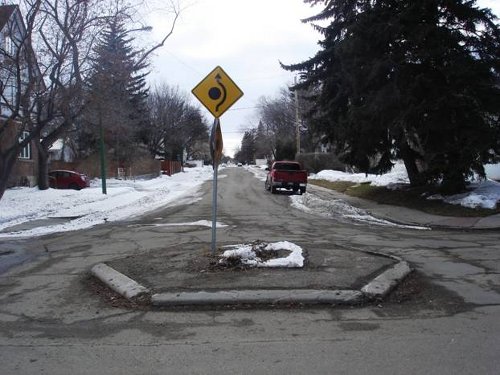 These things are everywhere in Regina. Signs that tell you to drive around the sign. I suspect their purpose is largely aesthetic, offering nuance to a street grid that would otherwise pretty much be graph-paper. I noticed that only the more affluent neighbourhoods have them.

Before that she spent the bulk of her adult life in this house. 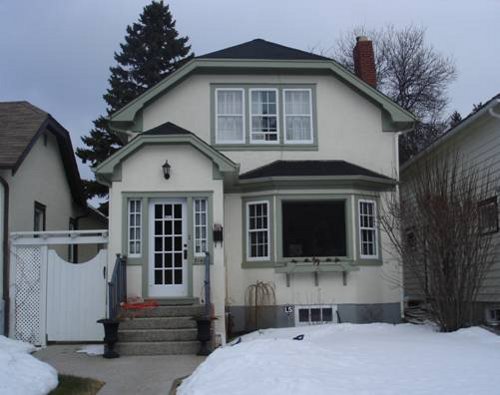 Aside from losing a good deal of her eyesight she's in excellent shape and of sound mind, with a steel trap's worth of a century's memories. It was great to see her.

Her apartment has a monitor onto people arriving at the front door. 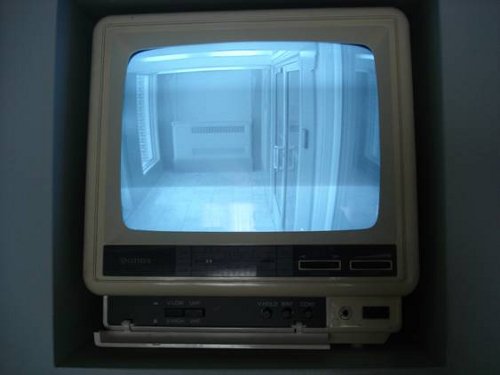 I always imagine that when she buzzes me in, I can run to her apartment really, really fast and I'll be able to see myself pushing the buzzer. It would prove that I leave a residue in the places I've been. So far I haven't been fast enough.

I have thought further about empty fields and how their poverty of visual distractions forces the mind into itself, magnifying the burdens of conscience.

I thought of this passage from Acts with its singular version of how Judas Iscariot met a nasty and well deserved end.

Now this man purchased a field with the reward of iniquity; and falling headlong, he burst asunder in the midst, and all his bowels gushed out. (Acts 1:18, KJV)

The text doesn't specify that Judas exploded in the void of a Saskatchewan Park. But I feel that's implied by linguistic starkness. And the emptying of things.

Enjoyable reading. And that image really should be your author photo.

based on that one photo, I think it's safe to say that you were hands down the coolest guy in Saskatoon that day.

"a sign that tells you to drive around the sign" very funny. Mark you're one of my fav RTH writers