The big box model destroys the possibility of any street life in its surroundings.

Look at every big box conglomeration in the Hamilton area (Ancaster Meadowlands, Upper James, etc.), and the same arrangement is repeated:

Instead of building to the sidewalk, facing outward, and opening onto the street, every store turns in toward the interior parking lot, apparently ashamed of its surroundings. This, of course, is consistent with every other architectural travesty built since the 1960s.

Rather than weaving stores firmly into the fabric of the built environment, the big box model segregates stores from their environment inside a bubble that may as well be hermetically sealed to non-drivers.

Take a look at this satellite photo of Upper James and Rymal. 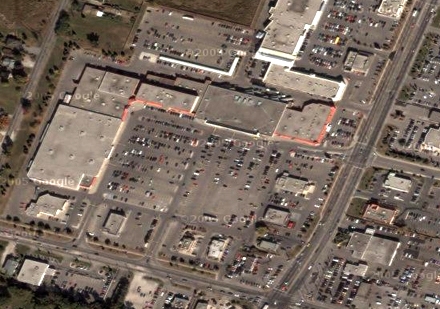 The smaller buildings on the south and east edges of the development are theoretically on the street, but go there and you'll notice that every one of them points into the parking lot, not out to the street. Reflecting the reality of its surroundings, one of those buildings is a drive-thru bank.

The traditional mall: an enclosed space in the middle of the block, surrounded on all sides by parking. An internal hallway connects the stores. 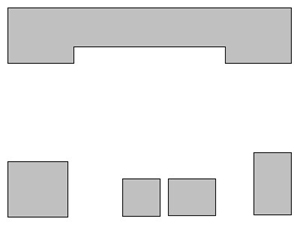 The Big Box development: a huge parking lot in the middle of the block, with box stores around the edges. Stores face the interior lot, and are not connected by an indoor hallway.

Traditional malls are usually located on cheap suburban land and can only be reached by car, but at least visitors walk once they arrive. Big Box developments replace the interior hallway with a huge parking lot, locating the stores around the edges of the block, facing inward.

Many big box developments, like the gargantuan strip along Golf Links Road in Ancaster, are so colossal and so lacking in basic pedestrian infrastructure that it is nearly impossible to walk from one store to another.

The development along Golf Links Road is so big that a 'street' runs through its middle to connect the stores. Shoppers drive from one box to the next.

It is no overstatement to say that the big box model destroys the possibility of any street life in its surroundings. When it is built on a greenfield, the big box creates and reflects a car-oriented mode of physical and social organization.

When it is retrofitted into an existing urban area, especially one that is struggling against the odds to rebound from a half-century of suburbanization, the big box cannot help but repel pedestrians and overwhelm the street life of its surroundings.