The Gothic style was chosen for its Christian associations, but it was used it a manner that was distinctly different from the Roman Catholic and Anglican churches of Dundas.

Knox Presbyterian church, 23 Melville Street, was constructed in 1874 to the design of the Toronto firm of [James] Smith and [John] Gemmell.

An article in The Hamilton Daily Spectator, Saturday Evening, May 16, 1874, reprinted in the British American Presbyterian [Toronto], 29 May 1874, p. 6, reports that the foundation church for the new church was laid on the evening of Friday 15 May 1874. The previous church had been destroyed by a 'terrific windstorm which visited the Province on the 5th of December last'.

The article continues: 'A great part of the roof was lifted off bodily and hurled away many feet, while other parts were injured, and the whole edifice made well-nigh a wreck'. We are also told that 'From the appearance of the plans the new church promises to be one of the prettiest in the Province'. The estimated cost was $10,000.

Like St Augustine's Roman Catholic Church, Dundas, Knox Presbyterian church is Gothic in style and is constructed of red brick with white brick for the pointed arch heads (Figs 1 and 2). White brick is also used for buttresses and the corbel table that runs along the top of the sanctuary walls. The exterior of the side walls of the southernmost bay of Knox Presbyterian is articulated with a gable flanked by turrets in contrast to the corbelled eaves of the other four side bays. 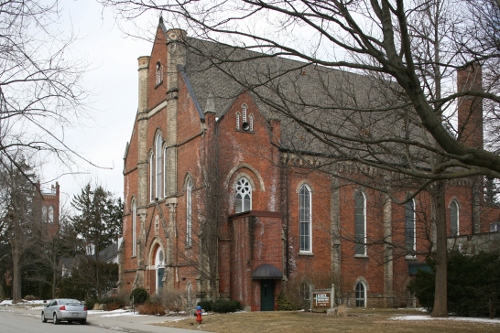 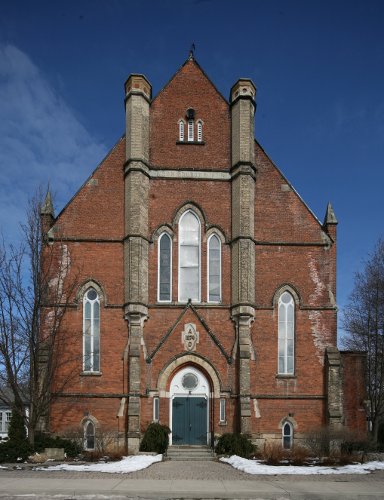 The differentiation gives external expression to the internal separation of the lobby, with its staircases to the gallery, from the four bays of the sanctuary. In contrast to St Augustine's, Knox Presbyterian does not have a tower, and the sanctuary is raised on a full basement lit by squat pointed arches. The full basement was popular in Presbyterian-church design from the 1850s on, as in St Paul's Presbyterian in Hamilton.

It was also favoured by Baptists, Congregationalists and Methodists in order to provide space for school, meeting and service rooms. Indeed the very same arrangement was used by Smith and Gemmell in many of their nonconformist churches including two that relate closely to Knox Prebyterian, Berkeley Street Methodist Church, Toronto (1871) and Second Wesleyan Methodist Church, Suffolk Street at Dublin Street, Guelph (1874-1876)(Figs 1-4). 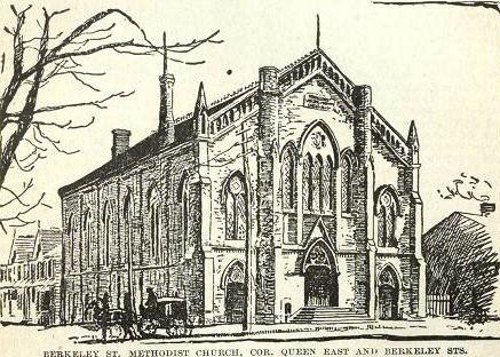 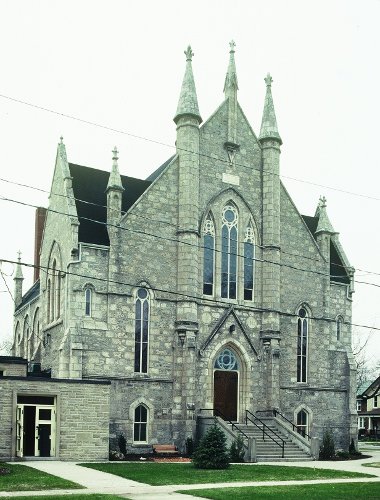 In all three churches stepped buttresses frame the façade and provide the lower part of a tripartite division which is continued in octagonal section in the upper part of the façade. The central doorway is set beneath a pointed gable and grouped lancet windows occupy the centre of the façade while two-light traceried windows are in the lateral bays. The Guelph and Dundas churches both have the exterior of the lobby articulated with side gables.

The choice of the Gothic style for Knox Presbyterian and Smith and Gemmell's other nonconformist churches is influenced by the Reverend Frederick James Jobson's book entitled, Chapel & School Architecture as Appropriate to the Buildings of Nonconformists, published in London in 1850. Jobson's views on Gothic reflect those of Augustus Welby Pugin. Jobson stated that 'Gothic architecture is Christian architecture, as distinctly and emphatically, as the Egyptian, Greek and Roman are Pagan'. He continued:

The propriety of employing Gothic Architecture on houses for Christian worship might be argued on other grounds - such as the confusion of apprehension or knowledge occasioned by our use of Pagan Architecture. Who has not felt the uncertainty of apprehension, and the incongruity of ideas, arising from the sight of a Chapel in Roman or Grecian Architecture when he entered a city or town for the first time? On looking upon the building (unless an inscription-board was on it) he could not tell whether it was a Concert-room, a Theatre, a Town-hall or a Chapel.

But who, on seeing a Gothic chapel, has had any difficulty in determining its appointed purpose? Its ecclesiastical form made known its use, at first sight, and without any possibility of mistake. What can more fully manifest the fitness and propriety of erecting buildings for Christian worship in the Gothic style of architecture?

Jobson also suggested that Gothic is more economical than Grecian or Roman, not least as he pointed out that there was no need for all the arrangements and enrichments of Gothic architecture.

The starting point for the Smith and Gemmell designs seems to have been the "Model Wesleyan Chapel" illustrated by Jobson (Fig. 5). It shares the tripartite division of the façade, the large pointed windows in the side walls and the bay division with stepped buttresses. The triple portals of Jobson's model are also repeated in Berkeley Street Methodist, Toronto (Figs 3 and 5).

James Smith had already referenced Bowler's model in his design for 'A Neat Country Church' published in The Canada Farmer in 1866 which, unlike Knox Presbyterian and the related Smith and Gemmell nonconformist churches, does not have a basement (Fig. 6). The use of the basement to accommodate Sabbath schools, a large and commodious vestry, public lectures and classrooms, was advocated by George Bowler in his book entitled Chapel and Church Architecture, published in Boston, Cleveland and New York in 1856. Bowler also suggested that: 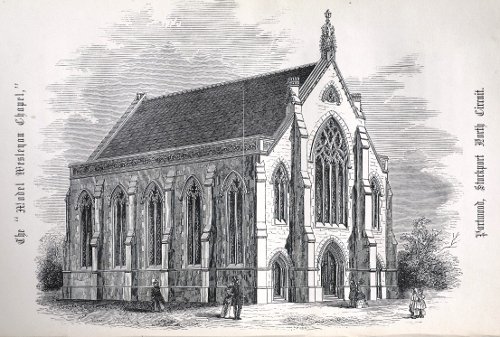 Fig. 5. The "Model Wesleyan Chapel" from Frederick James Jobson, Chapel & School Architecture as Appropriate to the Buildings of Nonconformists (1850). 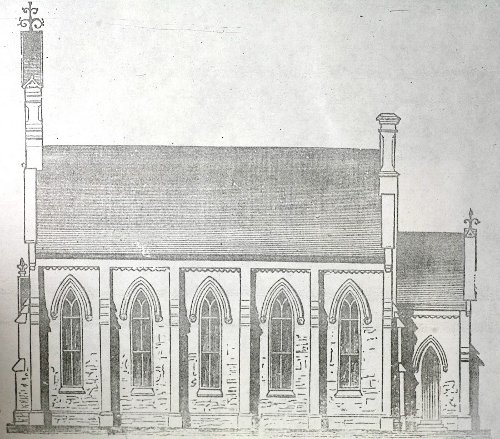 There is perhaps no style of architecture more perfectly adapted to the purposes of church building that that of the design which we here present. The idea has been very commonly diffused that this style is more costly than others; but such does not prove to be the fact. The Gothic is no more costly than others, while it presents advantages which no other style gives for chaste ornament and beautiful effect.

The internal arrangement of Knox Presbyterian is quite different from St Augustine's (Figs 7-9). Instead of the three-aisled division with transepts and separate sanctuary and the use of lath-and-plaster rib vaults at St Augustine's, the sanctuary of Knox Presbyterian is not subdivided. It is covered with a timber roof braced with arced tie beams carried on moulded capitals and corbels, principal rafters and purlins, which are based ultimately on late medieval English precedents. 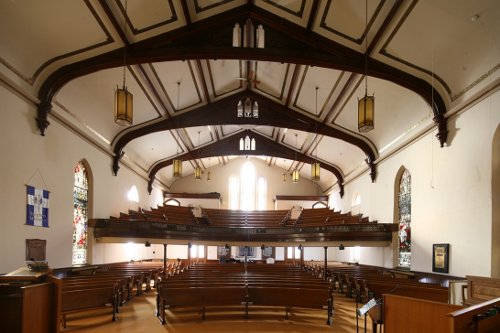 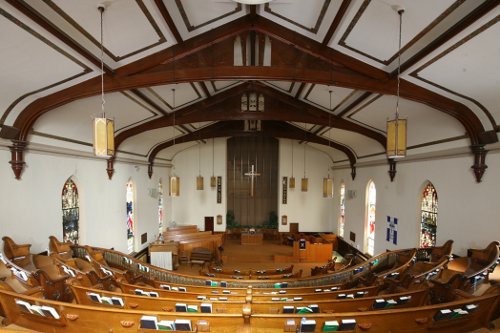 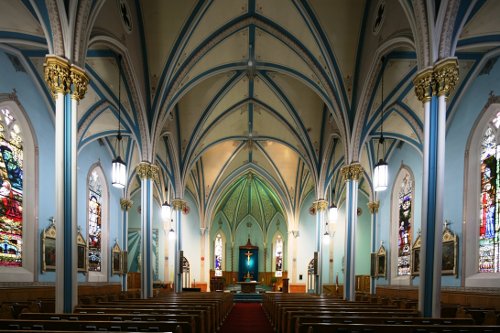 Arced seating is arranged in three banks separated by two aisles as opposed to the central aisle and straight seats in St Augustine's along with the separation of the side aisles with the main arcades carried on compound piers. A centre aisle was considered inappropriate for nonconformist sanctuaries of Baptists, Congregationalists, Methodists and Presbyterians.

Once again, reference to the Reverend's Jobson's 1850 book is instructive. He tells us that '[t]here should be no aisle down the middle of the chapel, but seats: it being much better for the preacher to look directly upon his hearers, than upon an open space'. The shorter and wider proportion of the Knox sanctuary, the arced seating and deep gallery carried on cast-iron columns provide a focus on the pulpit on the raised platform. Such an arrangement is entirely appropriate to place emphasis on the word in the Presbyterian service as opposed to the ritual of the Roman Catholics.

The pulpit platform at Knox is not the original but Smith and Gemmell's Second Wesleyan Methodist Church, Guelph 1874-1876, provides an idea of what the original may have been like with the organ framed in the monumental pointed arch(Figs 8 and 10). 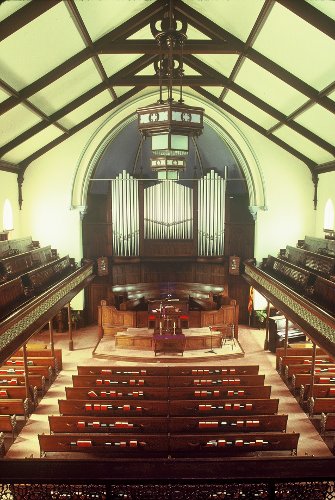 Like many architects in the 19th century, Smith and Gemmell were given the task of designing a church appropriate for a specific Christian denomination. In the case of Knox Presbyterian Church, they referenced materials that were produced to specifically assist in nonconformist church design.

The result was a building that better served the needs of a Presbyterian congregation by providing extra seating in the gallery and eliminating the central aisle between the seats favoured in Roman Catholic and Anglican churches. The Gothic style was chosen for its Christian associations, but it was used it a manner that was distinctly different from the Roman Catholic and Anglican churches of Dundas.

It's a shame that the white brick on the arch heads is really showing its age, but what a stunning interior - a triumph of design and the use of space, and the beams of the roof draw the attention upwards in a way that was probably not an accident...

Just came across this article. Thanks for writing it and the photos. I am planning on attending a concert in Guelph later this year at the Dublin St. United Church and have heard it's supposed to be an incredible venue.