Meeting to Re-Think Barton-Tiffany Land Use

A group of North End Hamiltonians has called a community meeting to discuss options for the future redevelopment of the Barton-Tiffany land in the West Harbour.

While the Hamilton Tiger-Cats continue to pursue a new football stadium in Aldershot, a group of North End Hamiltonians has proposed a community meeting to discuss alternative options for the future redevelopment of the West Harbour / Barton-Tiffany area.

The group, called Re-Think Barton-Tiffany, includes Sheri and Shawn Selway of the North End Neighbourhood Association (NEN) and historical researcher Heather George, issued a news release encouraging Hamiltonians to help consider a plan for the site that "respects the historic and geographic elements of the site, as well as the principles of the Setting Sail West Harbour Secondary Plan."

They have organized a meeting at You Me Gallery on January 10 at 7:00 PM and encourage Hamiltonians to join the discussion around what such a plan might look like. 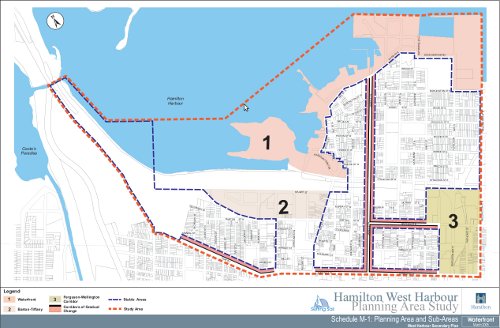 The preferred land use strategy [PDF link] of the City's Setting Sail: West Harbour Secondary Plan, developed in consultation with North End residents, originally proposed two preferred land use options for the Barton-Tiffany special policy area: a Medium Intensity Neighbourhood Extension, with building heights in the range of 4-8 storeys (the higher limit subject to urban design study); and a Stadium and Neighbourhood Extension that would include a sports stadium.

The latter option was included to allow this site to accommodate a Commonwealth Stadium during the City's bid to host the 2010 Commonwealth Games.

Public feedback on the stadium option was mixed. Many participants in the public consultations on the City's preferred redevelopment option for Barton-Tiffany noted concerns about the impact of a stadium on the neighbourhood, including traffic, noise and other disturbances.

At the time, City staff concluded that the Stadium option was "worthy of further study, on the assumption that it would lead and enable a larger strategy to reclaim surrounding industrial and brownfield sites" in part through attracting funding from higher levels to remediate contaminated brownfields.

When the West Harbour emerged as Council's preferred location for a Pan American Games stadium with the Hamilton Tiger-Cats as the principal legacy tenant, the NEN expressed strong opposition to the plan, citing the aforementioned concerns about a stadium being a poor fit for a residential neighbourhood.

Council approved the Setting Sail Plan in 2005, but it remains suspended in an Ontario Municipal Board appeal over the contentious matter of a proposed 30 km/h speed limit through the neighbourhood. As usual, Citizens at City Hall (CATCH) has a timely and detailed report on the progress of that appeal.

This type of meeting will be useful providing people keep in mind that the budget is not unlimited. Getting back to the Setting Sail Plan is the best news the area could get IMO

As a lifelong Hamiltonian and Tiger-Cat fan I'd still love to see the stadium there.

Something along the lines of Ottawa's progressive and urban friendly vision. Check out the impressive video.

I don't see any highways or paved parking lots. Further proof that the driveway to driveway experience is not necessary.

No budget is unlimited, that's for sure. So with that said, let's try to embrace the current (and latest) submitted design proposals from developer to the City (from those who own much of the Barton/Tiffany blocks) and you will see very community friendly development idea's. Ever thought about inviting that group who own and pay taxes on that land? Who have been blocked for many years from development... We're not talking about the Rheem site itself, but rather the lands on either side of that property... Who are they again? Oh yeah... WHITESTAR!

How about for once we actually listen to the neighbourhood in question?

last thing we want is for the NEN to choose what happens at west harbour. If it were up to them it would be the schoolboard building and a bunch of parks for the children. Won't somebody please think of the children!!!!

Lets not forget that the Tiger Cats have consistently said they prefer to stay in Hamilton, prefer to locate and would locate at Confederation Park, that Confederation Park is a natural destination for the folks with money in Burlington, Oakville and the peninsula, (consumers coming into Hamilton to spend money here) and that the new GO station will be across the QEW from the Confederation Park site. Its a no-brainer except that the people in that ward do not want the open air concerts.

I hope that some of the commenters / readers will come out to our discussion tomorrow. I do think we need to keep in mind the needs and wants of the North Enders as these are the people who will have to live with what ever is developed - as for whitestar I'm happy that they have done so much work developing a plan, howeevr I'm not sure that everything about it will be good for the area.

Anwyay thank you to everyone for being involved no matter what your opinions are!