Use of Fieldstone in Southern Ontario Buildings

Stone collected from fields during land clearance was extensively used for building in Southern Ontario, but mainly in the region along the Grand River, settled by immigrants from Scotland and Germany.

Fieldstone is the general term for stone used in construction that was collected from fields or streams, rather than being quarried from bedrock outcrops. In Southern Ontario its use was most common in the mid-nineteenth century in regions where the bedrock is covered by a thick layer of glacial debris, left behind by the retreating ice sheets, some 10,000 years ago.

Large stones, cleared from the land, along with trees and brush during the early years of settlement, provided a ready source of building materials. Builders preferred to select stones derived from the Canadian Shield (light coloured "granite," or dark amphibolite, but settlers was less discriminating in using stones for basements or barns.

Two main styles of use were common: Scottish immigrants preferred to refashion the stone into regular, rectangular blocks; other immigrants, largely of German origin, split the stones, but otherwise did not refashion their shape. In this second case, a large amount of mortar was required. 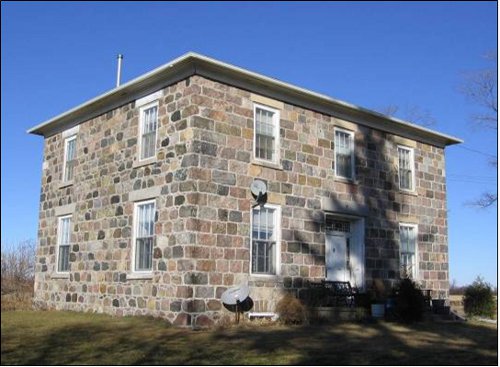 Figure 1. A fieldstone house in Princeton (west of Brantford on the old Governor's Road), built in the Scottish style, in the early 1850s for Henry Clifton Hornor (son of Thomas Hornor, who built the first mill and established the village of Princeton). The history is described further by Byers and McBurney (1982). 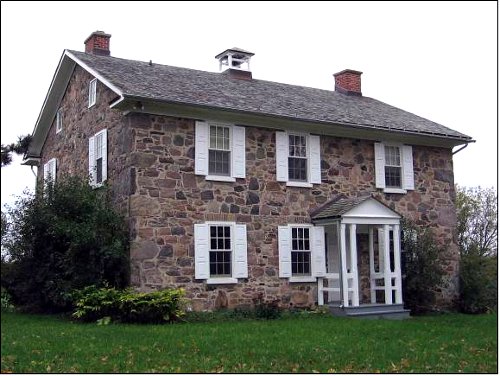 Figure 2. The Brubacher House, Waterloo, built in 1850. John E. Brubacher was the grandson of a German Company shareholder, and son of John Brubacher, who settled in Waterloo in 1816. (Brubacher and see archives for a collection of historical photographs). Some of the stones used to construct this house were unusually large (up to a metre across, but split to a thickness of only about 30 cms).

In the Hamilton area, there are very few examples of the use of fieldstone. The reason is, first, that bedrock outcrops of fresh stone suitable for building were readily available (Whirlpool sandstone, and Eramosa dolomite; and second, that the glacial lobe that covered the Hamilton area advanced up the Lake Ontario basin, and carried relatively few large stones derived from the Canadian Shield.

The next two photographs are examples from Stoney Creek and Niagara-on-the-Lake, both regions covered by the Lake Ontario glacial lobe. 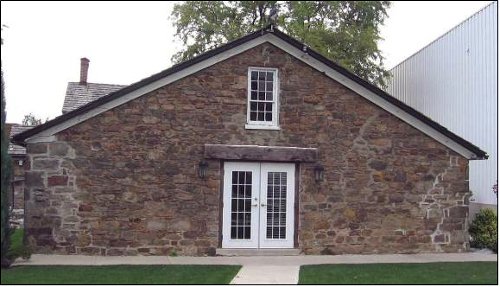 Figure 3. Cottage on the E.D. Smith property, Winona. Built as a farm building in 1835. The stone is local fieldstone, mostly Silurian Grimsby sandstone derived from the Niagara escarpment. The worn shapes are evidence that it was not derived from a quarry. 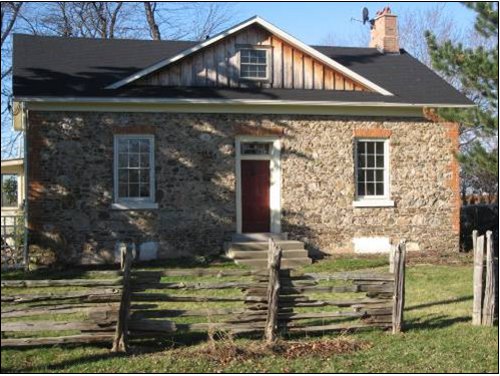 Figure 4a. The James McFarland House, at 1436 Concession 2, Niagara-on-the-Lake: built of local fieldstone in 1851 (photo by Bob Watson). Brick used for voussoirs and quoins. 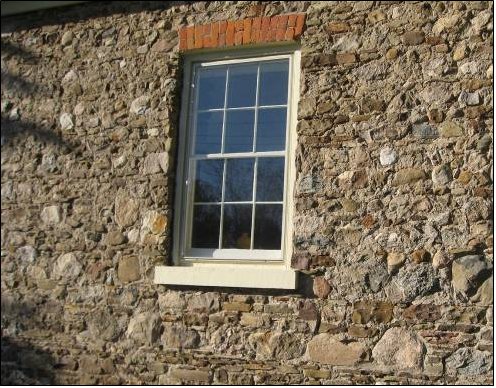 Figure 4b. Detail of Figure 4a: showing that the stones are mainly Paleozoic sedimentary rocks, with some grey "granites" derived from the Shield (photo by Bob Watson).

All of Southern Ontario was covered by ice during the Pleistocene, and the ice deposited debris (glacial till) in great heaps (called "moraines") - so how is it that fieldstone derived from the Shield was commonly used in Paris, Cambridge (Galt), Kitchener-Waterloo, Wellington County, and even in Norfolk County, but not in Hamilton or Niagara?

The answer is that the glaciers moving over Southern Ontario flowed in three distinct "lobes," each originating in a different lake basin: The Ontario, Georgian Bay, and Huron lobes.

As can be seen in Figure 5, three separate lobes covered Southern Ontario: the Ontario/Ontario-Erie lobe, the Georgian Bay lobe, and the Huron-Erie lobe. The three lobes met in the region near Paris and Cambridge, where the Ontario lobe deposited the Paris and Galt moraines. 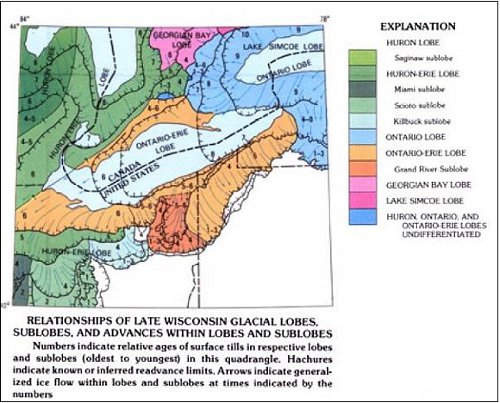 Figure 5. Glacial lobes in the region around Lake Erie (part of US Geological Survey, Quaternary Geologic Map I-1420, 1991).

But these moraines, unlike other moraines deposited by the Ontario lobe (e.g., the Vinemount moraine near Hamilton and in the Niagara peninsula) were formed partly by reworking debris previous deposited in the area by the Georgian Bay and Huron lobes. These two lobes followed a much more direct route from the Shield, and therefore delivered many more boulders derived from Precambrian rocks, than the Ontario lobe.

Another factor than may have been important locally (particularly near Galt and Paris) was the presence of the Grand River (and its glacial outwash predecessors), which reworked glacial debris and made access to stone easier for settlers close to the river.

Finally, we may ask why Scottish and German masonry techniques were so different? The answer can be traced back to the different traditions of these two groups of immigrants. The Scottish were skilled in cutting stone, even the hardest granites; while the Germans preferred to work with wood, and had an ancient tradition of using fieldstone in its natural shapes.

Waterloo Township has been the subject of a particularly thorough historical geographic study by Bloomfield (1995). Much of the area is covered by thick glacial drift, which discouraged the use of stone for building. The land ("Block 2" of the Haldiman Tract) was sold by Joseph Brant to Richard Beasley, James Wilson and Jean-Baptiste Rousseaux, in 1796-1798.

The southern part, including Preston and Hespeler in the east, was originally settled beginning in 1800, by pioneers from Pennsylvania (mainly Lancaster and Montgomery counties), with a Scottish component in the east and west.

The northern part was sold a little later to "the German Company," a group headed by the Erb family, and the settlers came from Pennsylvania, the German States (Baden, Bavaria) and Alsace, as well as a minority from England, Wales and Scotland. Settlement in Berlin (modern Kitchener) had outstripped that in the other towns by 1861.

Before the main wave, a few (perhaps 5,000) were soldiers employed in the Hessian armies who fought for the British, but after the Revolution preferred to remain in America. Later, most of those coming from Germany emigrated for economic reason, though political unrest and religious prejudice were also factors for some groups.

The first wave were peasants and craftsmen from rural regions of Baden, Würtemberg and the Palatinate; the second wave from the Eifel, Hunsrück, and the Mosel valley; and the third wave were labourers and factory workers from Mecklenburg, Saxony and the eastern provinces of Prussia. 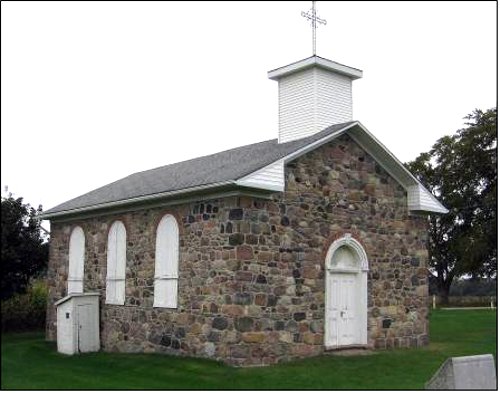 Figure 6. A small Catholic church, built south of Shakespeare in 1863 by German immigrants from Alsfeld, east of the Palatinate (Johnston and Johnston, 1967, p.145).

There was a tradition in eastern Germany of making use of fieldstone to build churches (see Fieldstone Church, and although the last wave of emigrants arrived too late to build most of the fieldstone buildings in Ontario, earlier emigrants were no doubt aware of this tradition.

In the U.S., fieldstone was used at about the same time (1840-1880) for building in Wisconsin, where many of the immigrants came from Germany, and which has glacial deposits much like those in Ontario (Wisconsin fieldstone).

By way of contrast, see the small fieldstone United church, built by Scottish immigrants just north of the border in Manitoba (ManitobaChurch). 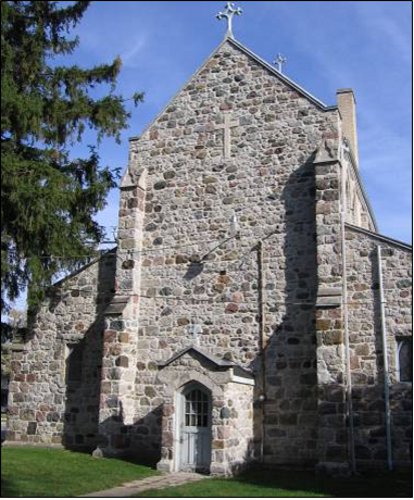 Fieldstone churches in Ontario were by no means always small: a large example, built in 1857, probably by German masons, is Sacred Heart Church in Paris (Figure 7). Its architecture has been the subject of an earlier article in Raise the Hammer.

Perhaps the finest examples of Scottish masonry using fieldstone, in most cases combined with locally quarried Guelph dolomite, are to be seen in Cambridge (originally Galt). It was settled by Scottish immigrants in early nineteenth century, and largely rebuilt using stone after major fires in 1851 and 1856 (Chapple, 2006, p.63-73). 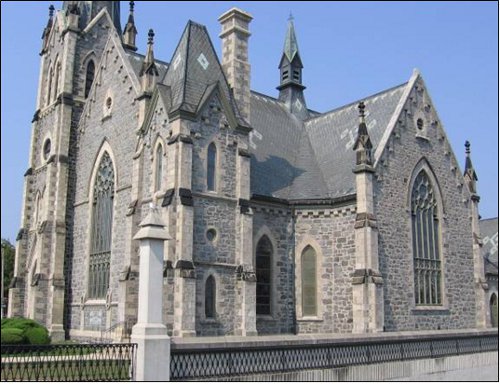 Figure 8. Central Presbyterian Church, Galt. Constructed in 1860 of dark fieldstone and light Guelph dolomite. Note that the fieldstone has been carefully shaped and selected for colour (it is a green-grey gneiss - light coloured granites were not included).

In almost all the buildings, the fieldstone has been as carefully trimmed and selected as the quarried dolomite. The selection of fieldstone by Scottish masons was carried even further in some buildings.

Figure 9 shows a house in Glen Morris, south of Galt. The front consists of Guelph dolomite and carefully selected gray granite-gneiss derived from fieldstone. The sides use a greater variety of fieldstone. The large sills, and lintels (composed of a central keystone and two large lateral voussoirs) are built of sandstone, probably Whirlpool sandstone, which must have been transported some distance, at considerable expense. 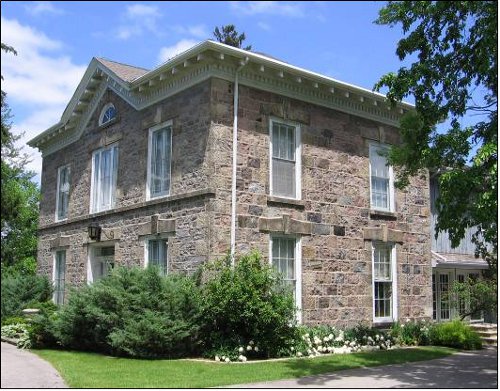 Figure 9. This house in Glen Morris was built in 1860 by the Latshaw family (the date is inscribed on the underside of the keystone above the main doorway).

Scottish stonemasons did not learn to use fieldstone in this way in Scotland. Most nineteenth century buildings in Scotland were built of sandstone (Edinburgh, Glasgow) or quarried granite (Aberdeen). Fieldstone was used, but mainly in modest buildings dating from an earlier period of history. What the Scottish masons brought with them to Canada were the skills needed to fashion even the hardest stones, such as granites, into regular blocks.

The imaginative use of fieldstone, so well displayed in Galt, was not learned in Scotland, however, but was developed in Ontario by Scottish masons as a response to the resources locally available. 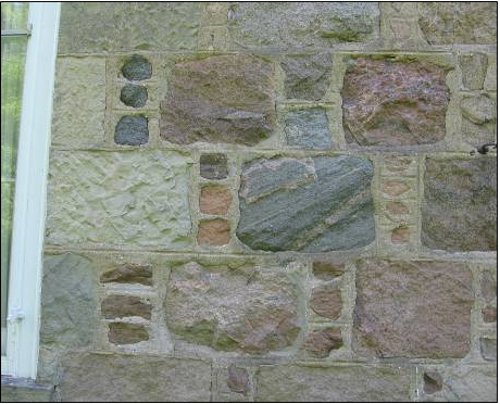 Figure 10. Detail of the side of the house shown in Figure 9. Note the variety of stones, and the careful shaping and arrangement in regular courses. The pattern of inserting a single column of 3-4 smaller stones between the larger stones is typical of Scottish stonemasonry, and is called 'Aberdeen bond.'

Say what you will about the exploitative labour standards and colonial wealth creation systems of the 19th century, but they did leave some handsome buildings behind.

I'm kinda curious about the labour standards involved. Stone-masons are known for their enormously powerful guilds, how much of a role did this play in Ontario? And how many of these buildings were simply put up by residents and friends? Wages may have been low in early Canada, but in many ways the situation improves the farther you look back, since most wage work was supplemental income on top of farming etc.

Canada's northern climate has always provided a basic economic barrier to the kind of exploitative nature seen in the south. The same patterns show up all over history and the globe. Not that it didn't happen here, but given how much harder it is to sustain a person in Canada than the Caribbean, we never really could have seen slavery on the same scale. Added to that, sugar doesn't really grow here, and the industries which did suit the colonial regimes (logging, fishing, fur etc) require workers with a lot of autonomy and aren't easy to manage on a plantations. Not trying to excuse anything here - just put it all in a little context. I suspect, as lifestyles went, being an Ontario stone-mason just wasn't that bad by 1850s standards.

Tongue-in-cheekiness on my part. I have no idea about the finer points of the economics or personal freedoms of the British Empire.

Thanks very much for these essays you've presented. They're a nice change from the norm and combine two of my favourite things: architecture and geology. Thanks again.

I agree. This was great, thank you.

(So when are the usual suspects going to show up, rave on about those awful lawns, & suggest we knock these building down & build condo's on the site?)

To quote my Mother, "It's a good thing the Pyramids or Stone Henge were not built in Canada. They would have been torn down years ago."