As long as concentration of poverty exists, residents living in these neighbourhoods remain a community of interest that should be considered when electoral boundaries are set.

In Hamilton, some concerns were raised about the first set of proposed boundaries, including residents in Hamilton's West Mountain who voiced that they did not have a community of interest with Ancaster. "Community of interest" is one of the primary criteria in the legislation that sets out how ridings are to be re-drawn.

In light of these concerns, the Boundary Commission released revised maps for the five proposed ridings for Hamilton.

The revised set of boundaries raise a different set of concerns and issues that should be brought to the Commission's attention. The Social Planning Research Council (SPRC) has particular interest in the promotion of social inclusion as a key strategy to increase community engagement (including voter turnout), especially among the large number of Hamiltonians who are living in poverty.

The riding redistribution process could benefit from applying a "social inclusion lens" when the boundary commission makes its decisions.

The City of Hamilton defines social inclusion [PDF] as:

[G]enerating the feeling and the reality of belonging... and taking deliberate steps to welcome, accept and value all individuals, understand reverse exclusionary practices, and create opportunities for people from marginalized groups to participate in the planning and delivery of services.

A social inclusion approach makes it clear that marginalized groups should be considered as communities of interest and steps must be taken so that their voices are represented where political decisions are taken. Given different rates of electoral participation and incomes across the city, certain electoral maps would risk denying this representation, by diluting some of Hamilton's most marginalized communities with the votes of more privileged neighbourhoods.

The SPRC's 2010 report, Hamilton's Social Landscape [PDF], devoted some attention to the issue of voter turnout and mapped the turnout across Hamilton for the previous provincial election (the most recent data available at the time of publication).

These were some of the findings:

Most of the polls with the lowest voter turnout rates are concentrated in the areas closest to the industrial areas in north and central-east Hamilton, areas that also have higher rates of poverty. As noted in the Hamilton Urban Core Community Health Centre's No Community Stands Alone [PDF] report "there are many obstacles to civic participation and community involvement when you are poor."

Lower voter participation among residents who are struggling on low incomes creates a negative feedback loop: our city's most vulnerable aren't represented at the tables where policies that affect them are discussed and civic and political leaders don't hear their voices when making decisions, then those on the margins feel that the political system does not reflect their priorities and they become more disenchanted.

The SPRC has overlaid the two sets of proposed electoral boundaries compared on the map of voter turnout previously published. Applying a social inclusion lens to these boundaries highlights that the community of interest in a large swath of the lower city would be split in half by the second set of proposed boundaries. 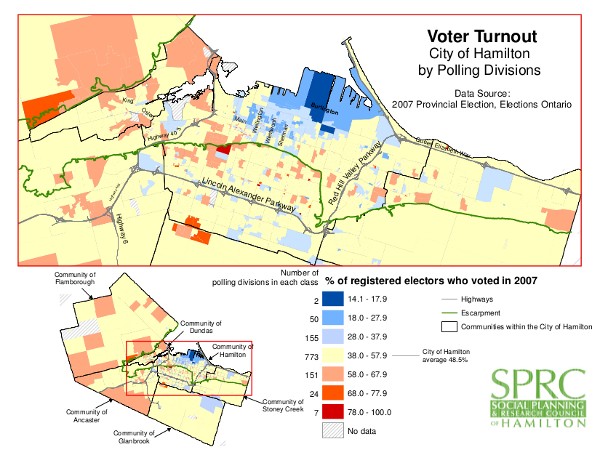 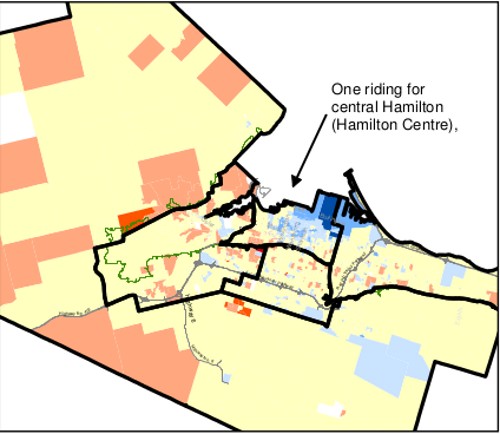 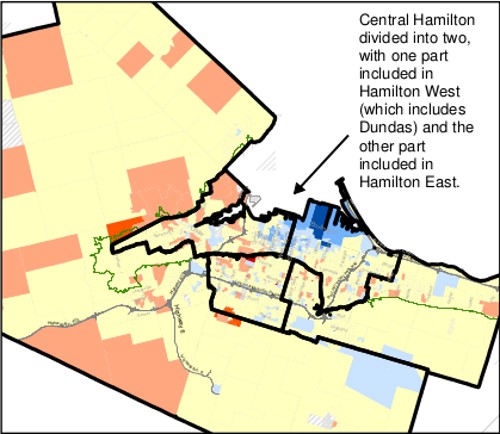 In the second set of proposed boundaries, the part of the city with the lowest voter turnout, central Hamilton gets split into two ridings: Hamilton West and Hamilton East.

The Hamilton West riding boundaries would include Dundas, Westdale, and the central Hamilton neighbourhoods of, Kirkendall, Strathcona, Durand, North End, Central, Beasley, Corktown, Landsdale, Stinson and Keith. These latter seven neighbourhoods have much higher than average poverty rates and many polling divisions with lower than average voter participation rates.

With this revised set of boundaries, these neighbourhoods will be part of one riding with Dundas and Westdale, which have much higher voter turnout (and also much lower poverty rates). There is a significant risk that the voice of the most marginalized residents of Hamilton could become diluted and even more disenfranchised.

Until these issues are tackled in a comprehensive way, many marginalized groups, especially residents living in poverty, will continue to be connected by geography and not solely income.

The 2012 Federal Electoral Boundaries Commission for Quebec has explicitly raised the issue of declining voter turnout in the introduction of its report and suggested that in context of voter apathy it is especially important to ensure an adequate representation of electors (that is to say all citizens eligible to vote, not just those who show up at the polls).

Applying a social inclusion lens to the boundaries in Hamilton will support this task.

Note: this article was first prepared for the Social Planning Research Council of Hamilton (SPRC)

Sara Mayo is a Social Planner, Geographic Information Systems with the Social Planning and Research Council of Hamilton.


Of those ridings, Hamilton Centre alone was shrinking but I wouldn't have expected it to disappear entirely. That said, the proposed solution isn't unprecedented.

"Hamilton Centre is a federal electoral district in Ontario, Canada, that has been represented in the Canadian House of Commons since 2004. It was created in 2003 from parts of Hamilton East, Hamilton West and Ancaster—Dundas—Flamborough—Aldershot ridings."

its tough to be hard on inner city folks for not being more engaged. They hear about multi million $ fancy archways and cobblestone roads in Ancaster, Dundas, Hess etc all the time. And see schools close constantly so gorgeous new schools can be built in outlying areas. King, Cannon, Main through central Hamilton still look identical to how they looked when I was born. Not a red cent or single effort has been made to help bring these areas back to life and create safe, green, vibrant neighbourhoods. Other than re-paving once a decade and filling potholes so all the short-cutters can roar through unimpeded, there are huge swaths of Hamilton that have been completely ignored for a generation. I wouldn't vote either if I lived there.

Hess is in Hamilton Center, BTW. As is Strathcona.

What has been done for the neighbourhoods between Wellington and Gage lately? Or how about "ever"?

Clr Morelli has been representing that area for 21 years. He'd be a good person to ask.

I was thinking of the geographic area east of Wellington. The downtown core has certainly seen investment, and despite all the freeways, is really turning the corner. I'd like to see the same level of investment and care for the areas stretching from Wellington to Parkdale, especially Ward 3.

The Commission is working on a federal riding redistribution.

Voter turnout data in Map 1 is drawn from a provincial election.

By and large, neighbourhood-level design is a municipal issue.

Our province always follows the federal government in riding layout, though, so that difference isn't relevant I think.

Meanwhile, the year I left Portland to come back to the Hammer, NE Alberta was worse than Barton/King etc..... they weren't content to leave it depressed and boarded up, and promptly got to work on intentional investment to make it business friendly and attractive once again. Barton, King and Cannon need this treatment, like yesterday. But where there is no vision.......

Portland is of comparable population to Hamilton but also the largest city in Oregon, which makes its success or failure a belwether for the state. Ontario is blessed with the nation's capital and the province's capital/country's largest city. Oregon's scale equivalents for Toronto, Ottawa and Hamilton would arguably be Portland, Eugene and Corvallis. (Even here, however, there's a lesson: Corvallis Transit System is a fareless service.)

As for Albertan economic development, they're almost like bizarro Ontario. (And the whole of AB is half as populous as the GTA.)

Jason, I often appreciate your words yet have to say that there is a hell of a lot of money offered to the Core for redevelopment ~ Take a look at the different grants/loans that the City offers to ONLY the downtown...I have not seen any “$ arches, cobblestone in Dundas...”

I have a hard time believing that low Voter turn-out is based strictly on one’s income or lack of. Dundas has one of the highest person/population of seniors and low income single families...Westdale has many students...

The ‘report’~ that points to poverty ~as the key to disengagement, does not make sense to me. Has someone physically spoken with the people who do not vote and asked? When I ran during the last Municipal election, I did...it had nothing to do with their financial status...it had everything to do with “my vote means nothing...they don’t listen anyway.”

We need to stop pointing the finger at any one ‘group’ of Citizens as a reason for...What an insult to those that are living ‘below the poverty line’; who make a point of voting...
IMHO low Voter turn-out has everything to do about how people perceive our Government and until we ‘fix’ that; we will be seeing history repeating itself over and over again.

We need to get our Teens interested and involved NOW if we are going to see a turn-around in Civic Engagement. Change starts with the next generation and until it is introduced and a part of their education ~ the cycle will not be broken.

Have an awesome day everyone.

Averaging the above ridings, by election year...

All this hub bub about changing boundaries is boring, since it is the entire political party system that is flawed, in my view.

All these so called experts, with their high priced educations fail to speak about what is really wrong.

The high levels of poverty are due to the fact of the changing government policies of funding have gone on for years, yet like sitting at the anti poverty caucus, listening to those brilliant Mac students, talking about we need daycare and lower tuition, back in the day, we had daycare and bursuary programs, which have been stripped by all levels of government, never mind the loss of jobs due to free trade policies as well.

It is my opinon that the world our so called elected officials live in, is just like in the film The Corporation, partying in a high glass tower, drinking champagne and eating cavier, oblivious to the chaos in the streets. How can our elected officals just give themselves hefty raises, yet take away social programs, leaving those at the bottom with nothing, but despair.

And you wonder why people do not vote.

"No Religious Affiliation" per StatsCan

Federal elections with turnout in the 60-70% range:

"In 1945, the mass media comprised newspapers, radio and cinema; television was still in its infancy and BBC broadcasts did not resume until 1946. Cinema was still a major source of news as well as entertainment thanks to the newsreels that preceded films. The newsreels (which you can see at www.britishpathe.com and www.bfi.org.uk) were usually less than ten minutes long and were highly deferential towards leading figures of authority. A decline in cinema attendance led to the demise of the newsreel format: after a peak of 1.6 billion admissions in 1945-6, cinema audiences plunged to under a third of this figure by the mid- 1950s. This collapse was almost entirely due to the rise of television, which soon emerged as the main provider of news and entertainment.

News was a staple part of early television, and news bulletins became longer and more regular. The legalisation of commercial television in 1955 and commercial radio in 1973, of satellite and cable television in the mid 1980s, and of digital television after 1998, all added to the sheer quantity of news and entertainment broadcast."