Hamilton Beach Community Cleans Up its Patch of Our Planet

Confucius, Elvis Presley and Commander Hadfield agree: we need to clean up our backyard. So it's great to see people doing just that in Hamilton Beach Community.

Confucius was reputed to have said 'Clean up your own backyard before criticizing the house next door'. The irrepressible Elvis Presley gave it a modern spin.

Today, Commander Chris Hadfield orbits around Planet Earth every 90 minutes, or 16 times a day, ratifying this wisdom with his awe-inspiring photographs of our Living Earth.

This truly amazing and one-of-kind planet is the shared finite home of all of Earth's varied air-borne, aquatic and land-bound species. When we take a moment to think about all that, it really is a kind of mind-boggling, gob-smacking, jaw-dropping marvel.

Many of our goofs are visible from space: orange tailing ponds, bilge dumps in the oceans and devastating clear-cuts, to name but a few. We can all now see that we're making a mess of it.

Recently, Commander Hadfield whizzed over the Great Lakes and snapped this intriguing shot of the Golden Horsehoe area on Lake Ontario. He tweeted the image to his 720,000+ followers on Twitter.

The Golden Horseshoe, approximately 300 km above the planet.

As the dominant species on Planet Earth, we humans do seem to be getting smaller and smaller in relation to the ever-expanding universe. Yet, even so, Confucius, Elvis and Commander Hadfield's 'Down-to-Earth' observations continue to ring true.

If we continue to vigorously pollute the water, air and land we need for survival here on Planet Earth, Mother Nature will be unable to produce all the vital necessities that we need for continued well-being and Life.

Team Up to Clean Up

With this thought in mind, I headed out early on Saturday morning on April 27, 2013 to the Hamilton Beach Rescue Unit at their headquarters on Beach Boulevard, on the western edge of Lake Ontario, for their 8th Team Up to Clean Up event in the neighbourhood.

I thought there would be hordes of committed and enlightened Earth enthusiasts out there on that lovely sunny spring morning. It was, therefore, somewhat disappointing, initially, to see so few 'on deck' in the back parking lot. 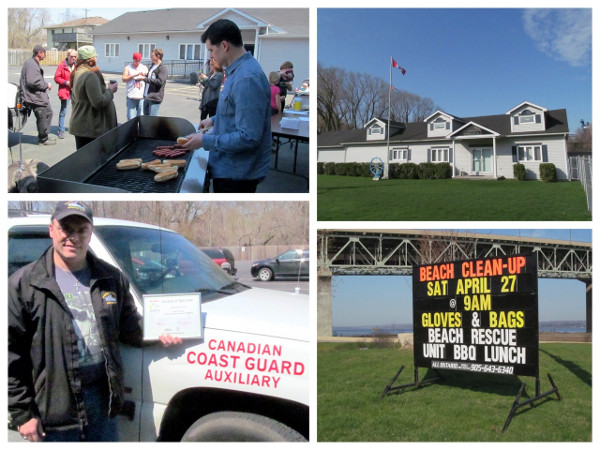 These middle-aged men were preparing the assorted garbage pick-up supplies that would-be participants were going to need: free gloves, orange garbage bags and graffiti wipes. They were also serving up the 'free' coffee, bottled water and Timbits from the event's sponsor, Tim Hortons. Everyone was waiting, patiently waiting, for everyone else to show up...

The first to show was John Rigby, a 27 year long-time resident of the Beach Strip. He admitted that this was his first year attending the Rescue Unit event. We started to talk about the many changes to the area over the past few decades. 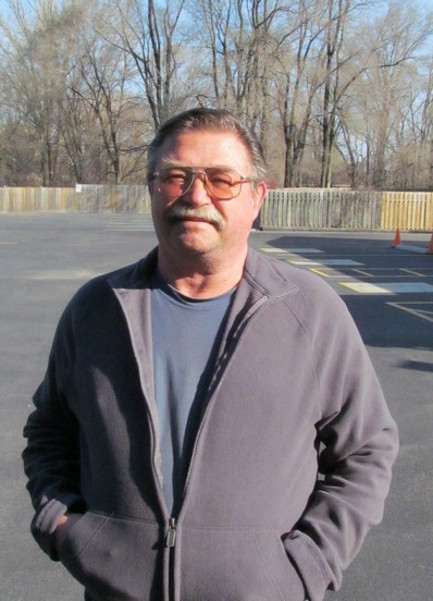 Once a well-loved family beach destination in Southern Ontario, rapid industrial expansion during the middle of the twentieth century - and the erection of massive beachfront hydro towers, the roaring QEW highway and the elevated Skyway Bridge - quickly obliterated this once-charming Hamilton lakefront oasis. The whole strip slid into dereliction.

It has only been in the past decade, said John, that the area is making a comeback. And he was here to help.

Over the next twenty minutes, about seven others showed up to get their 'clean-up' gear. Dispirited, I wandered over to the beach with my empty bag and gloves. 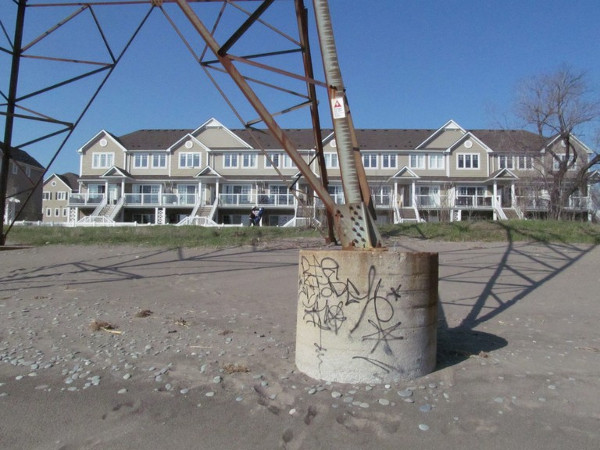 Nondescript graffiti on the base of the hydro towers stand in front of new condos popping up on the Hamilton Beach Strip.

What a surprising delight it was then to suddenly see lots of people - men, women and hordes of children - all over the place: bending, raking, shoveling, and picking up other people's discarded garbage.

Many of those who were working along both the beach and the boulevard had not bothered to register with the Rescue Unit. They were just doing it because it was the "Right Thing to Do". YES! 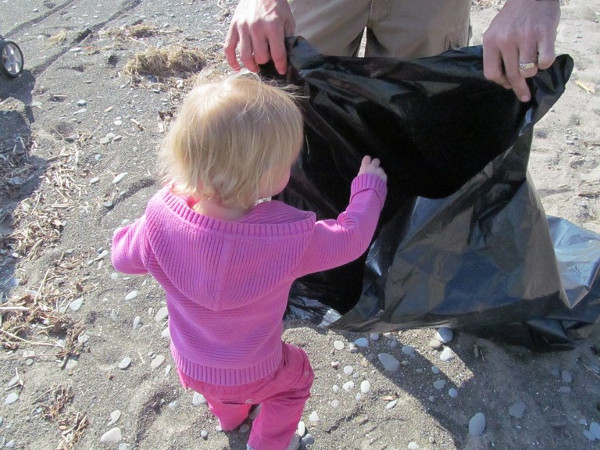 Madeline Apanashk does her bit.

The Girl Guides were sweeping the beach for plastic. Couples were making a 'date' of it. Children were darting from one twinkling bit of junk to another under the watchful eyes of their busy back-bending parents. New residents (within the last five years) heaved ho beside older residents (10 years or more), pulling up old tires, abandoned electronic debris, and sorting through shoreline wash-up.

Everyone pitched in. It was a grand community effort by at least 50 to 60 dispersed 'locals' that lasted for three great hours. The mood was festive and the weather fantastic. 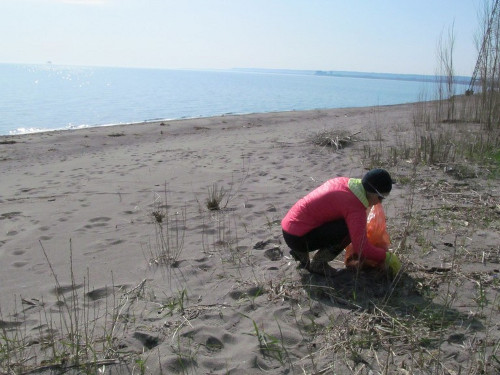 Perfect weather made cleaning up others' messes easy.

Overall, everyone's efforts revealed the desire to bring back the hidden charm of this long stretch of public beach on Lake Ontario.

Yes, they were cleaning up after others, but they were also doing it for themselves and the future of their loved ones. All will now better enjoy the unparalleled beauty of this unique beach strip in the Great Lakes Basin on Planet Earth.

In that sense, Confucius, Elvis and Hadfield got the picture. Three dedicated hours of 'cleaning up the backyard' by dedicated earthlings is a great place to start. 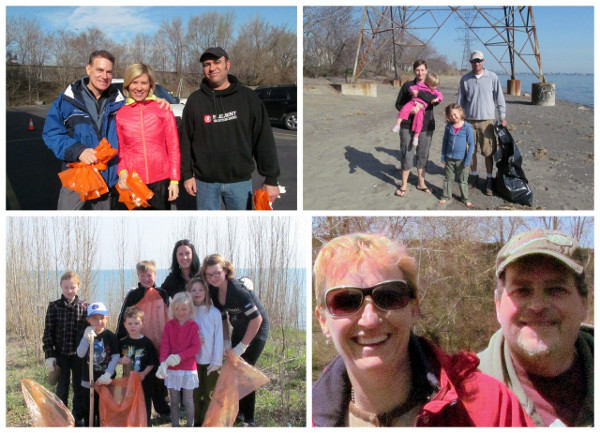 Dedicated volunteers making our planet better for everyone. 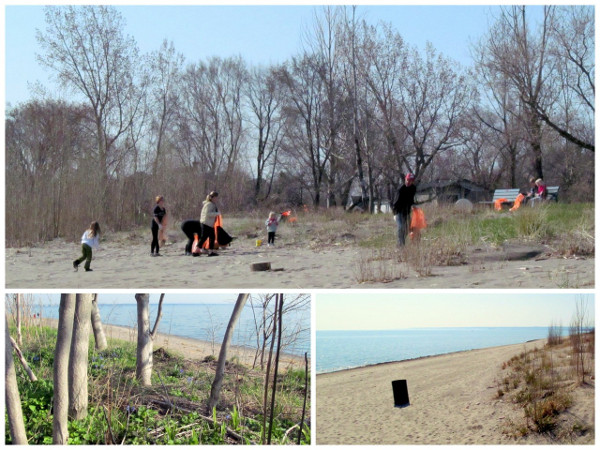 Doing it because they love the Beach. 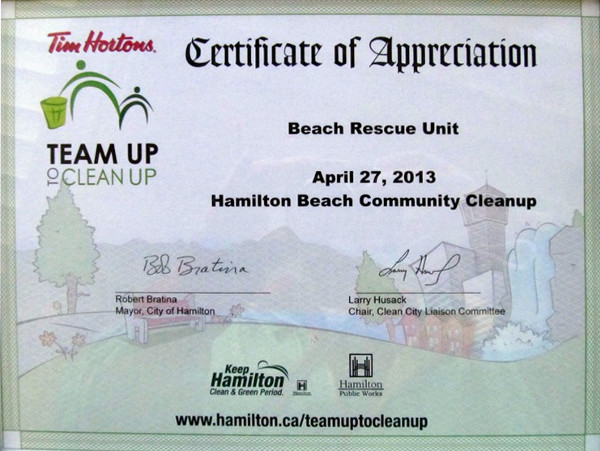 Certificate of Appreciation to the Beach Rescue Unit: a job well done.

p.s. It's somewhat ironic that Tim Hortons, the sponsor, supplied non-biodegradable, non-disposable plastic bottled water for this event. Empty plastic canisters were one of the most commonly found discarded items around the 'hood. It's sobering to think that plastic, in one form or another, has been found on every beach in the world.

But never mind - our transformation into 'Planet Caretakers' isn't going to happen overnight. We just have to keep at it: make Earth Day, Every Day, in Every Way.

You are good people. Thank you!

Very well done guys ... so lets juste hope Hamiltonians can keep it clean until next spring

The worst area is always beside the Lift Bridge and adjacent parking lot. - Why do people persist in using 'public spaces' as 'dumping grounds'??? - I would suggest that most who do 'dump' there are merely passing thru: they sure aren't 'locals'.

These transients repeatedly demonstrate how thoughtless, uncaring and indifferent they really are to the larger community - and the planet we all live on.

Learning to clean up after one's self is BASIC.

Offramps that end at traffic lights get similar treatment, I've noticed. Basically, somebody kept their window rolled up for a long highway driving trip and then dumps their stuff when they arrive at a stop. I'd wager the long wait for the light at the lift bridge results in similar treatment.

I really wish he had a city graffiti removal crew. I swear, then amount of tags and unsightly graffiti it out of control in the city. I never noticed until this site posted an article about it, but the amount of times I've now noticed the tag of Kennur just upsets me.

Planting ivy at the bottom of cement walls will not only cover ugly concrete walls but make it difficult to spray graffiti on the walls.

'Kennur' was caught and fined a while ago, I believe. Don't know if he' still tagging?

Oh yeah, he's still tagging. There was an article regarding him in he Spec last year with the police effectively saying their hands were tied because he never seems to be caught in the act.

Funny...I was at the beach that day, but knew nothing about the co-ordinated cleanup effort. If there were signs in the Baranga's area, I completely missed them. Though I do recall seeing a few folks around with garbage bags in hand. That being said, we never really wandered off the boardwalk, and were handling a number of small children at the time. But considering the amount of folks that were out there that day, perhaps next year, a booth along the boardwalk would be a good idea?

The public beach strip runs from the Lift Bridge to Fifty Mile Creek. That's a LOT of ground to cover, even for enthusiasts!

There was a big mobile sign erected at the Eastport entrance to the Hamilton Beach Community, Beach Blvd, for about two weeks before the event. But yes, for sure, better 'publicity' would help for next year. Contact the Rescue Unit for more info next year. :)

Great job by a great community. I so appreciate this area of Hamilton and it gets better every year!

This is just my view but humans, are pigs, really. So does pikcing up garbage change the entire issue of pollutiuon of the air, water and land?