Every time you go for a walk and get more enjoyment from it than by buying into the latest fad, you vote against economics defining your life.

I have written earlier about how modern marketing has trumped reality. There is something more important than whether or not certain facts are biased by advertising. It is the ability to consider the whole of human reality or to live in a scoped, manufactured version of it. 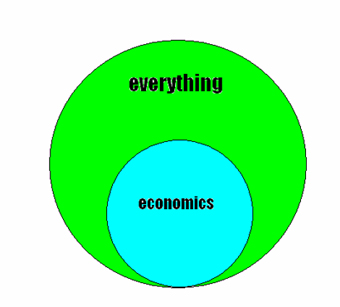 When marketing takes over, people start to see the world through the eyes of economics, which are essentially blind to the "green area". That is, consumerism starts to take the place of important human realities that are inherently different from anything that can be assigned a dollar value.

Depressed? Go out and buy something that will cheer you up. Low self esteem? Get some plastic surgery to build your self confidence.

As for consequences, if it doesn't have a dollar value, it might as well not exist. So promote a product by fancy over-packaging, because someone else pays for the waste disposal in another's back yard. Or build another road and effectively restrict the social interaction within a community.

The pursuit of profit and market share trumps making appropriate products. I was recently at an engineering lecture where it was emphasized that the one that sells is the better design. Forget if it actually achieves its purpose better or more cost effectively, or what consequences incur from its manufacture and use. The bottom line is that it must sell and this dominates all other measures of success.

This thinking illustrates that the assimilation is nearly complete. Engineering exists almost entirely within the blue circle, and many other sectors of society are almost as confined. It's as if the market represents some ultimate, almost religious truth that is able to determine right from wrong, and from which everything else is derived.

There are a number of prominent people in Hamilton among business and elected officials who think in this scoped fashion. I have seen firsthand the word "sustainability" used to describe how the profit from business development will build up areas of the public good such as parks, community centres and social supports.

Great, but that is describing charity and it isn't working anymore. Actual sustainability would consider from the start what effects, positive or negative, a business plan would have on social and environmental factors and give these equal weight with the bottom dollar line when making a decision to proceed.

In the long run, the sustainable method that better approximates human reality would likely produce more profit and equitability than one which plows forward, blind to the external costs and consequences.

But our elected officials have not the balls to try a sustainable approach, being intellectually bound by the heavy chains of conventional business friendly planning. There is only so much creativity available when the bottom line is looming over your brain, and most of it has already been used up without much success.

There are seeds of hope, even if they are not well defined. Whenever you see a truck or SUV being used for pure commuter purposes and get a gut feeling that something is obnoxious about this, it is a resistance to markets redefining reality. Every time you go for a walk and get more enjoyment from it than by buying into the latest fad, you vote against economics defining your life.

Business would do well to acknowledge its limitations. Placing external costs at zero will eventually lead to those factors coming back to haunt you. Perhaps not in your generation, but eventually pollution, climate, energy shortages and social unrest can all easily topple the economic structures we have built. This will happen regardless of whether causation is admitted by the disciples of business.

To put it another way, truth doesn't care what you think.

I am writing this to help you consider breaking the chains of economically defined reality. Forego that trendy snake oil, live beneath your means, and take a look around. You may find that happiness lies mostly in the green area of the diagram.