Wilson-Blanchard has submitted a letter of intent to revoke the demolition permit for 18-22 King East, but as of today the permit is still valid.

Six months after Council approved a compromise to save the pre-Confederation building at 18-22 King Street East, the demolition permit for that building is still in effect. 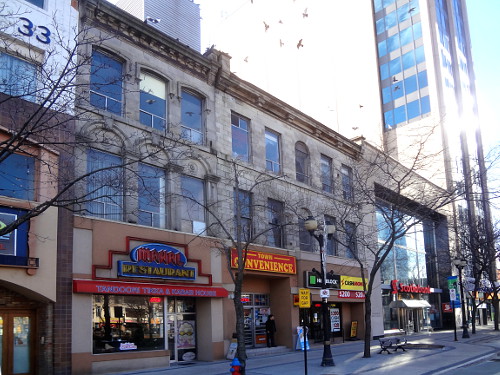 In January, after an outcry by heritage advocates, the City negotiated a compromise agreement with the developer, in which they agreed to have the demolition permit for 18-22 revoked. Under the agreement, the developer would remove only the rear portion of 18-22, while the complete demolition of 24 and 28 would go ahead as planned.

However, the agreement still does not guarantee that any buildings will be preserved. 18-22 will not be designated under the Heritage Act but merely added to the city's Municipal Register of Heritage Properties.

After Council approved the compromise motion, Wilson-Blanchard submitted a letter to the city to express its intent to revoke the demolition permit, pending an engineering study into how best to remove the rear portion of the building and secure it from the elements.

The building has an interior courtyard, and architect David Premi, who is working with Wilson-Blanchard, suggested in an interview earlier this year that the idea was to remove the building from the courtyard back.

Six months after the deal was made, the demolition permit has still not been revoked.

Ed VanderWindt, the City's Chief Building Official, said in a phone interview this morning that staff expect to receive an application to revoke the permit in a few weeks, once the engineering study is complete.

In the meantime, the permit is still in force. According to VanderWindt, as of today the developer "has a permit to demolish the building."

My request for a copy of the letter was refused, as "the correspondence is from a citizen to the city."

However, VanderWindt expressed confidence that the developer will keep his commitment, pointing to a track record of doing what he says he will do.

18-22 was designed by architect William Thomas and built in 1840. 24 and 28 were built in 1874-6. According to Michelle Sergi, community planning and design manager in the ciy's Planning Department, "All four buildings face Gore Park and are integral components to the King Street East streetscape and the character of the Gore area."

When the demolition permit became public, heritage advocates called for the buildings to be saved, and the Architecture Conservancy of Ontario (ACO) called on the Province to intervene when it became clear that City Council did not value heritage enough to prevent the demolitions.

Unfortunately, Tourism and Culture Minister Michael Chan has not taken action. According to the ACO:

Michael Chan does not seem to believe that this statement applies to him, and refuses to intervene in an municipal decisions (or lack of decisions, or questionable practices) to save heritage properties in danger of demolition. This has been especially apparent in Hamilton in the past six months where he has refused to even meet with ACO to discuss the loss of the four buildings in the Gore.

Meanwhile, the city is holding an open house and facilitated meeting next month as part of an inventory study of Hamilton's downtown built heritage.

Oh For F$ck Sake! Mr VanderWindt, your employer has a legal department. Ask them! Be prepared to battle to enforce the letter of intent.

Thanks for keeping us up to date on the Gore Park buildings, Ryan. Let's hope Wilson-Blanchard doesn't demolish 24&28 before the July meeting, so people have an opportunity for input.

It is my hope that they will see the value of retaining the character of these buildings and realize that value in sales. A setback of new buildings from historical facades would allow for rooftop patios or promenade overlooking Gore Park, and I can see that being a real selling feature for condos in that location.

It is, but does a tragedy continue to be a tragedy when it keeps repeating itself? I don't know...