It's almost over, so enjoy Summer.

I love summer. This one's been interesting.

There was a storm in July and a lot of trees and branches fell. Much of the trouble, I noted, was from Norwegian Maples, which have been banned in some states.

My old neighbour used to go on and on about the perilous "weed trees." He'd say, "Someday, someone will get killed." I had considered him an alarmist, but, now, I fear he was right. They may be hearty, slow-growing trees in Norway, but here, where summer is steroids, they're unnaturally big and dangerous.

Toronto Police Officer James Forcillo killed isolated, confused, teenaged Sammy Yatin, this summer. According to The Toronto Sun, Forcillo once maintained "Forcillo's Gym Web-site," whatever that is, whereupon he claimed he could bench-press 425 pounds. Forcillo also boasted of going from 140 lbs to 220 lbs in two years.

Sometimes, red flags are as big as weed trees.

Sammy Yatin, alone and armed with a small knife, weighed 110 lbs. He could have been disarmed and subdued by a tough guy with a road-hockey stick, yet James Forcillo shot Yatin nine times.

The night of the big storm, I went to a small gallery on James Street North, where Sky Gilbert, in drag, read poems about his dead mother. The performance, which was part of The Hamilton Fringe Festival, was short and sweet. As I like it.

Jack and Jill Beiber-Fever, a play I wrote, was also at The Fringe this summer.

Three summers ago, I wrote another play and sent it to Theatre Aquarius, "Attention Luke Brown," as per instructions on their website. Luke subsequently invited me to join Aquarius's Playwright Unit, which has been a crackling experience. Last year, I brought Jack and Jill to be read and workshopped by the unit. Ryan Sero, a member, took it to the Fringe successfully.

Jack And Jill Beiber-Fever won Best Play Ever, a very prestigious award I made up. 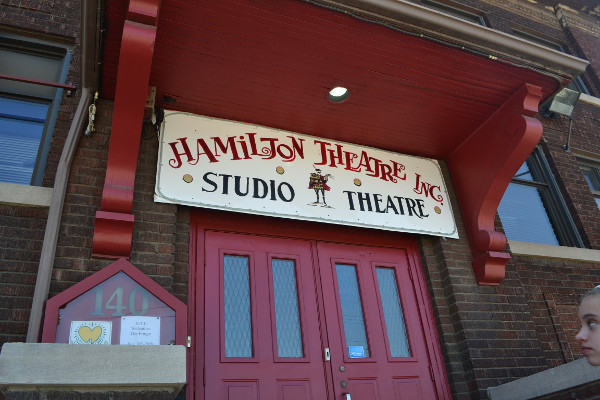 Hamilton Theatre Inc. was a perfect venue. You can see Claire, the younger, trying to sneak in. Every summer, my teenage daughters are less interested in hanging out with their old man. Sigh.

The cast for Jack and Jill rehearsed at Julia Veenstra's Art Gallery on James North. Veensta's daughter, Abigail, was one of the actors. Her mom's bright, energetic, lively paintings were a perfect backdrop for the play. 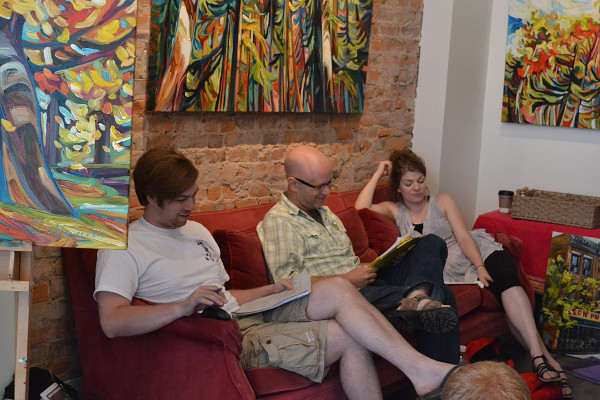 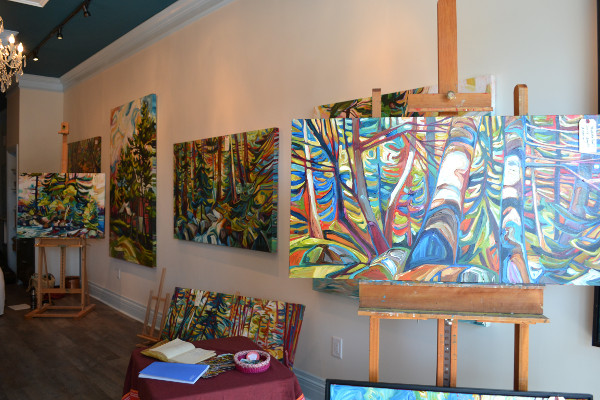 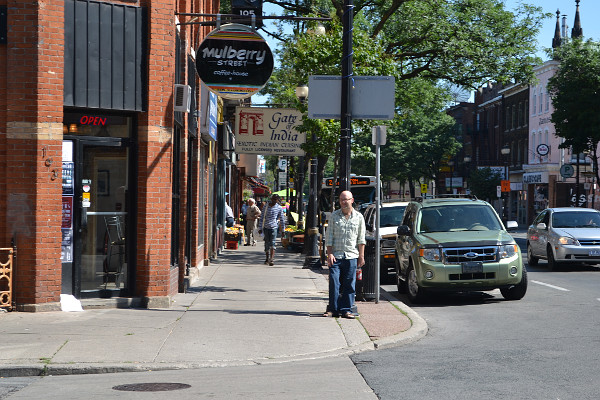 Whenever I go to the neighbourhood, I visit The Witton Lofts at 50 Murray Street. A perfect marriage of past and present, it's my favourite building. The addition is built on stilts, large pillars drilled through and around the old structure, and can stand on its own. Several times this summer, I'd go by and think, "What a great place to live; if you worked downtown, you could walk or ride a bike in the summer."

Mayor Bob Bratina was talking to one of The Witton Lofts' developers on his Cable 14 talk show earlier this summer. Bob said, "What a great place to live, if you worked in Toronto and wanted to catch the Go Train."

Former mayor Larry Di Ianni was also hosting a talk show on Cable 14, this summer. He was talking to P.J. Mercanti, who wants to invest in a casino in Hamilton. Larry was visibly excited at the prospect. Later in the show, Larry described guests, like P.J., as "movers and shakers."

Evidently, he didn't read the memo. The well-heeled now refer to themselves as "wealth creators." It sounds, I suppose, more healthier (sic) than mover shaker (sick). Regardless, I wish Hamilton's pro-casino crowd would move on and try to shake up (shake down?) another community, like Toronto.

Toronto's mayor, Rob Ford, wants a casino, after all, and he seems an intelligent, honest man with good judgment and impeccable integrity. Rob and Doug, the mayor's awesome brother, have been in the news so much this summer, I feel like I know them. And we've partied hard.

The Guelph Tiger Cat fiasco continued unabated this summer. Cats' owner and fiasco creator extraordinaire, Bob Young, is still getting a new stadium next summer, however.

Vladimir Putin, another politician who loves drama and cameras like a Kardashian, left his wife of 30 years, this summer. Then, after going deep into his closet for sexy-hot camouflage outfits, Putin went on an uber-macho, man-only hunting / fishing expedition / photo-shoot in sexy-cool Siberia. Following that extravaganza, Putin returned to Moscow, where he enacted anti-homosexual legislation, and became all the rage, everywhere. What a gay summer he's having.

My uncle Paul died in St. Peter's Hospital this summer. He spent his last weeks there. God bless St. Pete's staff and volunteers. My mom was one of seven children and Paul was her only remaining sibling. She's the last leaf on a lovely tree.

We used to go to The Festival of Friends each summer. I wonder what became of it.

The building at 220 Dundurn sat decaying, again, this summer. The conspicuous rot brings to mind Detroit, which tried to declare bankruptcy this summer. The Dundurn moldering is across from the Beer Store, which I visited a few times this summer. It's time for a crosswalk, there, bro.

I worked with guys, who call everyone "bro," for a while, this summer. It's kinda catchy, bro. 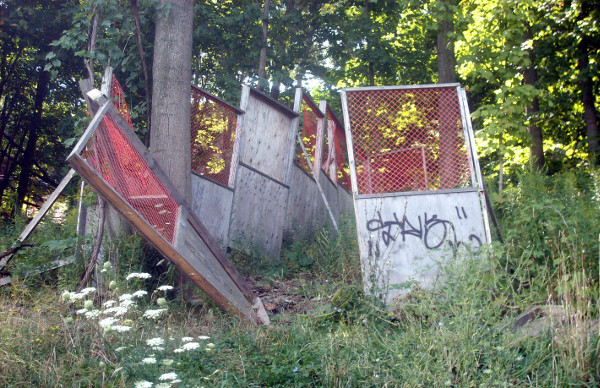 Tree barriers at the Res

The broken, nail-filled tree barriers at the Res got worse, this summer.

The "award winning" Toronto Star put up a paywall this summer and won another award, Stupidest Decision Ever.

George, my neighbour and BFF, provides a perfect respite from nonsense. He is the coolest guy I ever met. George has a pool-noodle-light-saber and, sometimes, he wears a cape. 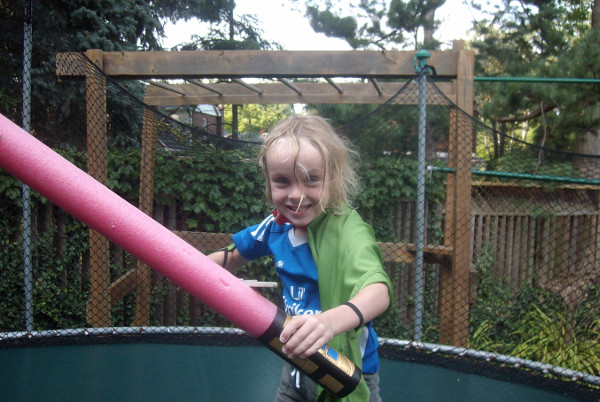 "All Summer Long" by Kid Rock is a great song. As is The Style Council's "Long Hot Summer", which my brother called "Long Hot Somers".

I saw my brother a lot this summer.

My kids introduced me to Vine, a popular vehicle for sharing educational or entertaining videos, this summer. Educators and entertainers take note: Vine videos are six seconds. If you don't think attention spans are shrinking and you need to adjust, think.

I went vegan this summer. We ran into my old pal, Phil Thomson, on July 22, and met a happier, snappier, thinner, trimmer man.

"Diet and exercise. I went vegan."

He's right. It's mind over butter.

Next summer, we're hoping for a brighter, lighter, tighter writer.

It's almost over, so enjoy Summer.

Days and days wearing short pants
Hours and hours working with plants
Sammy Davis sings, "Love is All Around"
While birds and bees make lovely sounds
Naps in the sun or a long steady hike
Ice cold Beer and riding a bike
This, I'm sure, is what Heaven is like

I thoroughly enjoyed that. What a terrific piece!

Yeah I enjoyed it too. Thanks.

BTW. I believe the Ont Invasive Plant Council (govt?) has declared the Norwegian Maple as an invasive species, thus unwanted.

I'm curious about the James N 'recently declared dead' anecdote. Is this something I missed at a different site or magazine recently? (Honestly, just curious). I think the street is coming along, albeit slowly. For instance, a group of us went to James N just this past Sunday around 8pm thinking we could grab dinner at Acclamation or Jack and Lois or something, only to find the street relatively dead at that time of night, many places closed up. Instead we drove over to Locke and found things teeming with life, full restaurants, people out walking, etc.

Just curious what people think regarding the differences and prospects for each street. Only been in Hamilton for 2 years now, so its history is new to me. We just moved into the James N area ourselves and want to see the best for it in the future.

Bob said, "What a great place to live, if you worked in Toronto and wanted to catch the Go Train."

Mayor Bob is out of touch. What are we going to do with this clown?

Actually, I would argue that getting people to live here and commute to Toronto is a bad thing for Hamilton - if done in excess.

I can tell you the answer, as someone who commutes to Toronto, and is away from Hamilton for 12+ hours a day, all I do in Hamilton on weekday nights is sleep here. I'm adding little if anything to Hamilton businesses, downtown or otherwise. On the weekends I do go grocery shopping, I try and hit a Hamilton restaurant on Saturday night. But my contribution to Hamilton's economy now is minimal compared to my contribution when I worked in downtown Hamilton.

Sorry there George B, but I have to disagree with your point of view. Reluctant commuter's response is appropriate, in my view.