Wilson-Blanchard received an Order to Comply for 18-28 King Street East instructing them either to fix the property standards violations of their vacant heritage buildings ... or apply for a demolition permit.

Heritage advocate Diane Dent had a meeting today with David Blanchard of Wilson-Blanchard, the company that owns 18-28 King Street East, to discuss the fate of the buildings after Council voted last December to designate them under the Ontario Heritage Act.

Blanchard surprised her by saying he just received a notice from the City to demolish the buildings. 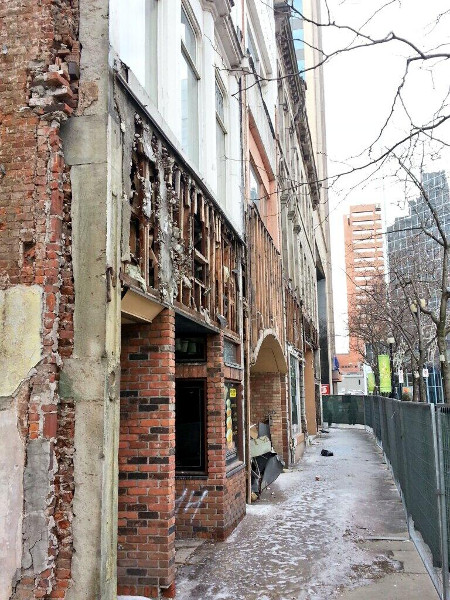 Dent sounded the alarm, contacting Ward 2 Councillor Jason Farr to ask what was going on. Ed VanderWindt, chief building official for the City, quickly clarified, "The City has not issued a demolition permit for the property."

Soon after, Farr explained what had happened in an email reply.

A Municipal Law Enforcement (MLE) staffer inspected the vacant buildings in mid-January and issued a standard "Order to Comply", which states that that property owner must either fix the identified violations or request a permit to have the building demolished.

The staffer who inspected the buildings did not know that they had recently been designated. Farr confirmed that the property owner would have to apply for a permit before proceeding with demolition. "At that stage, the error would have been flagged by our Building Department."

Farr apologized for the mishap. "We are sorry for any confusion that this issue has caused and can assure you that at this time both bylaw and Heritage staff are working in tandem as it relates to these Property standards issues."

Wilson-Blanchard applied for a demolition permit for the buildings in December 2012 after announcing a proposal to construct an unspecified new development on the block bounded by King, Hughson, Main and James.

After a year of campaigning by heritage advocates and a gradual breakdown in negotiations between the property owner and the City, Council unanimously voted in December to designate the buildings and revoke the demolition permit.

The property owner stripped off much of the buildings' facades last year while the buildings were still under a valid demolition permit. They do not appear to have done anything since then to secure the exposed fronts from the elements.

Ok then. What about the order to comply?

Fix it enough to protect it from the elements and meet community standards at least.

Here's an idea to prevent this sort of misunderstanding from happening again:

STOP PRINTING AT THE BOTTOM OF EVERY PROPERTY STANDARDS ORDER THE DEMAND THAT OWNERS EITHER FIX THE ITEM(s) LISTED ON THE ORDER OR DEMOLISH THE STRUCTURE AND LEVEL THE LAND.

One can only imagine that this ridiculous standard wording must have been introduced at a time when Hamilton was desperately clearing out historic buildings in preparation for the great building boom of the eighties and nineties that never happened.

Time for a total review of the management of City of Hamilton. Seems this is only the tip of the iceberg.

No, this is a simple clerical error, probably from a co-op student who was confused at the process of heritage buildings, etc. The buildings should almost be demolished as-is now! The facades are gone, the most important part of the building. Now it's just a shell of old structure and old pipes, wiring, asbestos probably - build new, but demand the arcitechtural styling replace what was lost.

build new, but demand the arcitechtural[sic] styling replace what was lost.

Robert D and huh have said it all, so I'll just add that the presence of asbestos is never a reason to justify demolition as it has to be completely removed prior to demolition anyway. I'll never understand why people keep dragging that one out.

I'm not sure what you're saying...

Are you saying that simple clerical errors are acceptable and okay?

Are you saying it's okay for the city to hire co-op students who don't understand the process?

Are you saying it's okay to leave enforcement of building standards to co-op students with what can only be described as insufficient supervision?

Are you saying the heritage process is too confusing and we should simplify it somehow?

Are you saying we should demolish all buildings that "probably" have asbestos without actually looking into the facts?

Do you work for the building department? The perpetuation of this sort of misinformation is exactly what got us to this point!

the facades are not gone. the superficial relatively recent ground floor commercial elements are gone. these would be the first elements to be removed during the restoration of such buildings. the most important parts of the building are the structure and the surviving original facade elements above the first and second storeys.

I was charged over $150 bucks for a building permit and the privilege to fix exterior brick mortar. It was deemed "structural". Assholes....

I worked for Building and Licensing as a co-op student when I was in university, about 10 years ago. Let's put some myths to bed: - Inspectors can _never, ever_ be co-op students. They must be a graduate of a college/university program and demonstrate a knowledge of what they are doing. - An OTC never says that you must demolish something, it says that you must fix it or if it is beyond repair that a request for a demo permit must be submitted. - Pearlst, you sound like you're upset about having to get a permit to fix something. Trust me, they don't deliberately go out of their way to charge you money that isn't necessary. Like a lot of city jobs, the inspectors are just following the laws and bylaws. I do need to ask, though, are you a structural engineer? Do you know what is structural and what isn't?

I've done brick pointing many a time and never got a building permit. This seems very strange, as I would classify this as "minor repair."

I can understand how it can be considered structural. My own house is double-brick; the brickwork and pointing is considered structural by my insurance company. For good reason--it's holding up the house. That being said...I can't imagine going after a permit to fix it. There's got to be more to this story.

"The well-known developer abandoned his appeal of property standards orders and avoided a hearing Monday by using plywood to block broken windows and holes in the damaged building facades of 18-28 King Street East. ...

"We blocked it up, but the only thing that could possibly be saved from those buildings now is the facades —the rest is garbage," he said. "They've been sitting there all winter without heat, probably flooding, full of mould … I wouldn't want to go in there now." "

"Sitting there all winter ..." because Blanchard left it that way. Still carrying out his plan to neglect-and-destroy these heritage buildings I see. There should be huge fines for what he's done, and forced sale of the properties if his company isn't competent to properly develop key heritage properties.