Even City Hall slowly appears to be realizing that investing some public money into core projects brings about a much higher rate of return than investing in sprawl.

Even the loudest naysayers of downtown Hamilton are having a tough time preaching their tired old message of decay, crime and neglect these days.

New residential projects continue to be announced and built and great restaurants, café's and art/­entertainment venues are clamouring to fill long-empty spaces with cool, renovated facilities in the heart of Hamilton.

Even City Hall slowly appears to be realizing that investing some public money into core projects brings about a much higher rate of return than investing in sprawl as we've done so freely for the past few decades.

A report going before City Council on Tuesday, December 13 is one more example of the changing mindset at city hall regarding downtown.

As of press time we could only get a hold of the black and white photo shown here giving a perspective of this proposed new building. Personally, I love it. 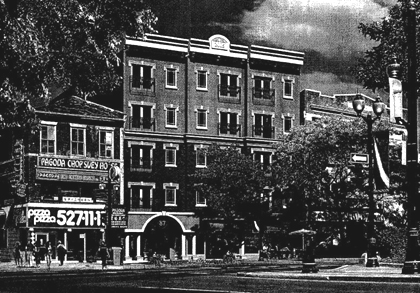 A missing tooth on King Street is getting some denture work

Hamilton City Housing constructed two similar buildings on Walnut Street between King and King William in the late 1990s and earlier this decade and the results have been wonderful for that stretch of downtown.

If you haven't been to the intersection of King and Walnut in a while, go take a look. The streetscape feels perfect, other buildings in the area are now being renovated in a similar fashion, and there is an upbeat feeling in this part of the core that a corner has finally been turned.

The Spallacci building now looks to be headed for redevelopment into an 11-storey apartment building and new eateries such as Brownies Downtown Fine Foods, The Curry Kabab House and the Red Quartet Lounge add to the growing optimism along King East.

There is much to like about the proposal for 87-89 King East. First and foremost is the design. After decades of under-appreciating our historic buildings, Hamilton has finally realized that the most successful cities in the world have wonderful streets lined with buildings from the past.

Even a street in rough shape like Barton offers so much more hidden beauty and architectural greatness than any big box store or Upper James style strip.

This five storey proposal blends beautifully with the existing buildings on King. It should serve as a catalyst for other building owners in the area to realize how beautiful their properties could be.

Another great piece of news in this project is the absence of parking for the tenants. I know parking is a hotly-debated issue in Hamilton, but the fact remains if we are ever to become a true urban city we will need a large residential population downtown that can walk, ride a bike or use transit as their means of transportation.

The more folks that live in the core with no car will help City Hall to realize the importance of these other modes of transportation.

I urge City Council to approve this redevelopment plan and continue looking for other creative ways to bring similar projects on line. Our city is being rebuilt one building, one street at a time.

That is the most appropriate and proper way to breathe new life into this great city.