Participate in the Your CBC Hamilton Survey

Now is a good time to engage citizens again on how well the CBC digital service is serving Hamiltonians and how it might improve.

The future of the Canadian Broadcasting Corporation (CBC) has been in the news of late. 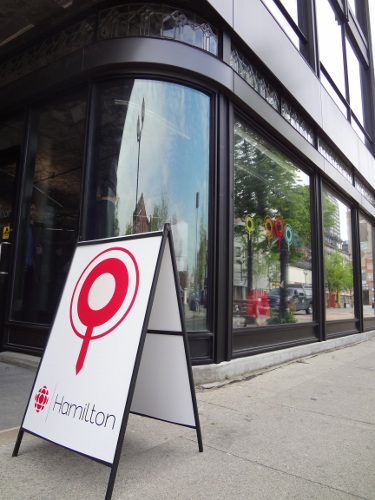 The debate about the value and purpose of the CBC at a national level is being waged within the CBC and in the national media among journalists, academics, pundits and politicians, all presenting differing views about the CBC's future. Additionally, the CBC itself is engaging the Canadian public about its future.

While this national conversation is certainly valuable, it is also important to engage in a discussion about how well the CBC is serving local communities, including the Hamilton region.

This is a timely discussion because in May 2014 CBC Hamilton marked its second anniversary in the community. The push to get CBC in Hamilton has been underway for a long time. This is an example of a successful community effort to ensure Hamilton's needs are addressed by a national institution that was virtually absent from the city.

Going back to 2004, Hamiltonians voiced their interest in seeing CBC provide local service to this region, the largest underserved market [PDF] in Canada without a local CBC radio station.

Local political leadership at the municipal and federal levels took on the issue before the federal regulator and at parliamentary committees. In a 2008 parliamentary report [PDF] that reviewed the CBC's mandate, Hamilton was singled out for its lack of local CBC service.

Finally, as part of CBC's local expansion plan, service to Hamilton was announced in 2011, but due to the current lack of available radio frequencies, CBC launched a local digital service in May 2012.

While a good start, the digital service is only a first step in providing Hamilton a CBC service that is on par with other communities. The long-term goal continues to be a local CBC radio station.

In addition, Hamiltonians continue to have an interest in CBC as part of their city. An article published on Raise the Hammer in October 2012 generated significant discussion, presenting a range of opinions about how well CBC was serving the community.

With that in mind, and in light of the second anniversary, now is a good time to engage citizens again on how well the CBC digital service is serving Hamiltonians and how it might improve.

In an effort to make the discussion as useful as possible, we are launching the Your CBC Hamilton survey.

The Your CBC Hamilton survey is seeking input from citizens about their experience with CBC Hamilton. This 5-10 minute survey is important as it will help gauge the opinions and expectations of citizens on CBC's efforts locally.

This is an independent project of the Centre for Community Study (CCS), a local urban research organization. All information shared as part of the survey will be kept confidential and will be used only for this study.

A summary of results will be released to the public in a report by the CCS, and the summary will be shared with the CBC to help improve future service to Hamilton.

Sonja Macdonald is co-founder and research director at the Centre for Community Study. Sonja coordinates the Hamilton Media Project, which seeks to expand the local media diversity in the Hamilton region.

I was going to do the survey till you said 'how well the CBC digital service is serving Hamiltonians'. Hmm, I suppose this means streaming internet radio, which I never do, being too distractable/ bandwidth challenged already!

Maybe Sonja can clarify technically what is meant (ie vs digital TV/FM signal?) and /or give us some other incentive to complete the survey, other than to just demand airwave service. Not sure if that expense can be justified amid other cutbacks, so I'll await other's thoughts here. Thanks.

Bob, thanks for your interest in the survey. The survey asks a variety of questions, for example, general awareness of the service, ease of access, frequency of use, content generation and distribution. It is designed to better understand how Hamiltonians are using CBC’s local service (i.e. cbc.ca/hamilton) and what they would like to see in the future. This could range from the status quo to a full local radio station or anywhere in between.

I support the CBC and feel it has a critical role to play in our community. CBC Hamilton is a fantastic development. Something that took a very long time to achieve. Hamilton needs more diversity in media coverage and CBC Hamilton is a great addition. It's news coverage has been great considering the limited amount of resources (i.e., small number of reporters). It heritage coverage was also great.

That being said, I am also concern about the lack of coverage of the arts scene in Hamilton. Particularly given that CBC Hamilton is located on James Street North, the heart of the cultural and economic earthquake that is re-shaping Hamilton.

Hamilton is also a power house in terms of music, but you would never know it from the coverage of the city.

I am fine with the digital format but they need to improve it significantly, particularly in terms of feedback to articles.

I am very concern about the future of CBC Hamilton and how the cuts caused by the lost of the NHL revenue and budget cuts by the Federal government may eventually impact the Hamilton operations.

CBC Hamilton has taken its share of heat for rarely venturing more than a few blocks from its offices, and has spent more than a little time hyping the various Crawls. It's true that there has been a boosterist bent to this, and it lacks critical heft, but that's true of almost all cultural and business press in Hamilton. (The same approach is evident in EcDev/Chamber/tourism/real estate press releases rehashed under a generic or needlessly sensational byline. The city is starved for hard news, not a hyperlocal BuzzFeed.)

Whatever inroads have been made, it is as true as it was six months in: CBC Hamilton needs to up its game.

Better to do the survey then complain about the CBC, providing input may help change or improve things