Not all men are rapists. However, there is a pervasive culture of gendered violence that is acceptable among some men.

This is the fourth article in a series for Sexual Assault Prevention Month. This series of articles addresses the issue of sexual assault. The material might be upsetting to some readers. Please take the necessary precautions and have a plan of self-care in place.

Canadian communities are impacted by sexual assault. Survivors may experience lost potential and productivity. There are immediate and long-term physical and psychological affects that add to health care costs. Funding is required for rape crisis centres, counselling, police and victim services, court and legal costs, as well as correctional services. These are all important reasons why it's imperative to prevent sexual violence.

The Metropolitan Action Committee on Violence Against Women and Children (METRAC) reported that 12 to 17 year old Canadians are the primary consumers of pornography. 35 percent of these youth admitted watching sexually violent scenes while 37 percent watched sexually explicit videos on a regular basis.

METRAC also found that exposure to violence and/or pornography increases:

At the same time, empathy for rape victims declines.

Pornography alone cannot be blamed for rape. However, pornography portrays unhealthy, unrealistic relationships where men are verbally and physically abusive towards women. This plays a role in desensitizing individuals, especially teens, to the act and outcomes of rape.

Not all men are rapists. However, there is a pervasive culture of gendered violence that is acceptable among some men. The Canadian Federation of Students - Ontario released a fact sheet entitled Sexual Violence on Campuses which included the following disturbing statistics:

A study entitled, "Denying Rape but Endorsing Forceful Intercourse: Exploring Differences Among Responders," was published by the Journal of Violence and Gender (Mar 2015, Vol. 2). A synopsis written by Ximena Ramirez highlighted the fact that the study asked male participants two questions:

When rape was described as coercing or forcing, 32 percent of participants admitted to using this behaviour. When the term "rape" was used only 13.6 percent admitted to the exact same behaviour.

Media is very influential when it comes to shaping the attitudes young men have about sexual assault. Recently, Bud Light added a new tag line to some of its bottles: "The perfect beer for removing 'no' from your vocabulary for the night" along with the hashtag #upforwhatever. This ad campaign reinforces rape culture.

Positive pushback is happening on Canadian campuses where student led campaigns are working to counter rape culture and create more equitable learning and living environments. For more than twenty years the Canadian Federation of Students - Ontario has been promoting the "No Means No' campaign. If you don't have consent, it's sexual assault or rape. 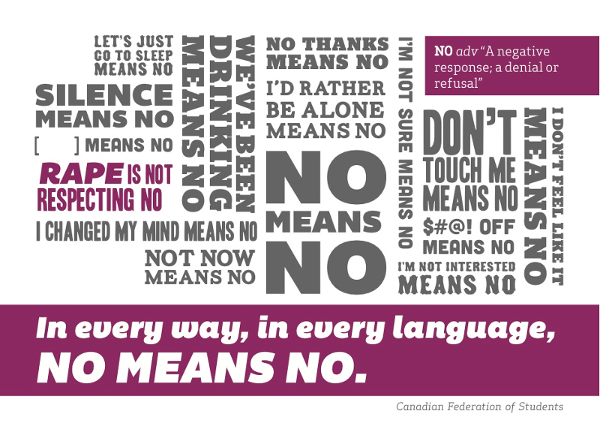 Last word goes to students from Carlton University who know that "No Means No".

Update: updated the sentence "...a pervasive culture of gendered violence that is acceptable among men" to add the clarifier "some". Thanks to the RTH reader who pointed this out. You can jump to the changed paragraph.

"Not all men are rapists. However, there is a pervasive culture of gendered violence that is acceptable among men."

Maybe you meant to write "some" men, but what you're saying here is 100% of men accept a culture of gendered violence.

We all accept it. That's why it's called a 'culture'.

Have you read the studies (which probably don't even capture the reality of the situation)? We have not evolved past this stuff. Maybe you have, but most people haven't, hence why 1 in 3 females experiences such violence. Wake up and accept the facts, and work to change them. Start by recognizing rape culture and fighting it.

60 per cent is not a minority, moron.

You may accept it but the vast majority don't

Re-read the article, moron. Esp. part that says 60 percent of...

The vast majority do through their consumption of popular media which allows the objectification of women to continue. It's systemic.

can't imagine Nicoll is much fun in a discussion or conversation: 'Please take the necessary precautions and have a plan of self-care in place.' Thanks there, we'll do that after we figure out what it means--it takes away from the strength of your postings, but of course you & RTH don't actually care about that.

The points in this article essentially concedes what that troll 'truthit' was saying on this subject. What happened?

I love 'dirty movies' but doesn't make me a pervert.

Uh, oh. Here we go again. Please stop. It's not about biology. It's about ethics. Yes we are animals. No it does not prevent us from using our frontal lobe.

It's probably both. You can't do away with the hard wiring through sensitivity training alone. We need to castrate some people.

What is it about articles about gender and assault that brings out the trolls and lunatics in such droves?

Thanks, Doreen, as always, for bringing these important, difficult (as evidenced in the comments!) conversations forward for us. The subtle and pervasive reality of sexism and misogyny ensures they are phenomena that will not right themselves.

Doreen, Please read this article to remind yourself that you must first lead by example. Would you have reacted differently if a man had said this? Where is the outrage?