Take an hour out of your work day on September 18th and enjoy the new park in a former parking space!

On September 18, 2015, the HBSA will be participating in the international PARK(ing) Day Party movement – a form of Tactical Urbanism - taking advantage of a new permit process implemented by the City of Hamilton to facilitate short term events in public spaces.

Recognizing that a metered parking spot is an inexpensive short-term lease for a plot of precious, underutilized urban real estate, Park(ing) Day challenges inhabitants worldwide recognize the need for new approaches to making the urban landscape, and realize that converting small segments of the automobile infrastructure - even temporarily - can alter the character of the city. From public parks to free health clinics, from art galleries to demonstration gardens, Park(ing) Day participants have claimed the metered parking space as a rich new territory for creative experimentation and activism. For more information on PARK(ing) Day see the website. 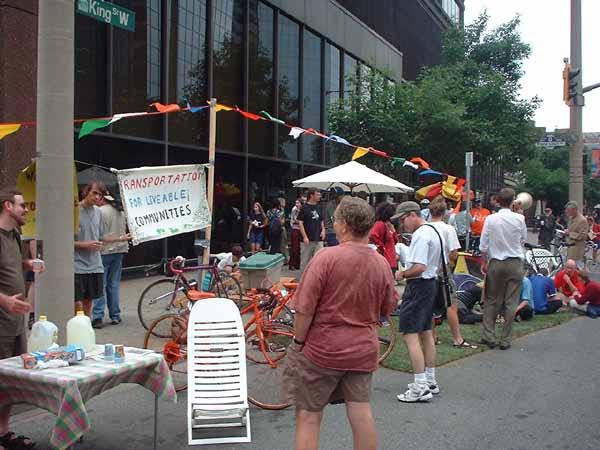 PARK(ing) Day Parties have a history in Hamilton. In 2001, the Transportation for Livable Communities advocacy group hosted a “Meter Party”. According to noted Tactical Urbanist Mike Lydon, this "Meter Party" was the first occurrence of a PARK(ing) Day party. Thanks to the wonders of the internet, we still have a record of that event and subsequent parties.

This year, the City of Hamilton created a new permit to allow PARK(ing) Day Parties. The permits (available here) were created as pilots for both the permitting process and for the events. The permits, while a very small scale pilot, is an encouraging move from the City that signals, I believe, that bureaucrats are starting to try to find ways to engage citizens and encourage and facilitate resident's involvement in our city and on our streets.

The HBSA will be utilizing two parking spaces, together, as close to the CBC on James Street as possible. Approximate address:

So take an hour out of your work day on September 18th and enjoy the new park in a former parking space!

Great stuff Graham. Pleased to see you folks doing this.

At the same time, it's kind of sad to see the slow pace of change in Hamilton. We hosted this exact event 14 years ago as mentioned above. Now, without a single parklet or street plaza anywhere in the city, we are forced to host the identical event yet again. I suspect 14 years from now it'll be the same.

Meanwhile, check out this page from the city of San Francisco planning department. Yes, this is an actual city department website, not urban hi-jackers, whiners or activists:

Hopefully one of these decades city hall starts to get with the times. How fun would it be to work on street parklets city-wide with city staff instead of having to do tactical urbanist demonstrations all the time? The talent, will and forward thinking exists in our city populace. You're a great part of that demographic.
Hopefully we'll see city hall catch on one of these years.....

I really enjoyed this today. I went down on my lunch, had a great conversation with a woman about gentrification, transportation, etc., saw an old friend of mine and hung out for a bit, met another couple of people including someone from the HBSA. This was excellent. Big kudos to the HBSA for this. It's a small thing but it's really inspiring.

Thanks for the pics. Wish I could have seen this install in person, but I wasn't able to make it down after work. Hopefully many did.

Whoops. My mistake — upon closer inspection, that's an archival pic of King & MacNab.