The new multi-use pathway is wide enough for two-way bike traffic and a raised curb separates it from the road.

In April 2015, work began on Mountain Brow Boulevard from Mohawk Road to Oakcrest Drive. Involving new water mains and services, concrete curbs and an asphalt, multi-use pathway, the project was scheduled to be complete by November. But it looks like the work may be finished closer to mid-October.

At one end of the new pathway is the intersection of Mountain Brow Boulevard and Mohawk Road East. This connects the new asphalt path with the Mohawk Road entrance to Hamilton's Escarpment Rail Trail, a multi-use trail developed on an abandoned CN line and extending from near Albion Falls to the city centre of Hamilton in Corktown Park.

The entire length of the new Mountain Brow Boulevard pathway lies between the newly repaved road and the edge of the escarpment. The pathway is wide enough for two-way bike traffic and a raised curb separates it from the road. 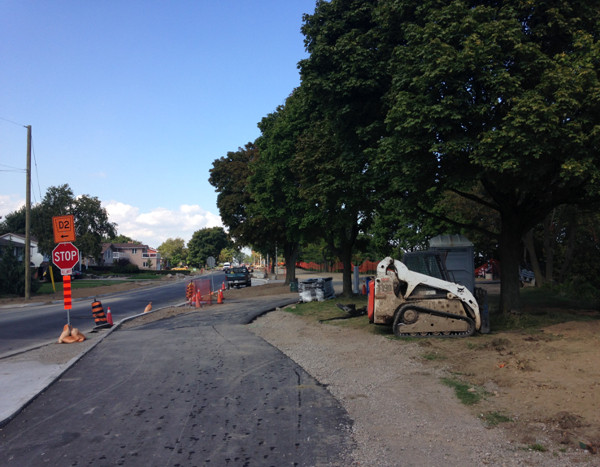 The path connects several parks and landmarks along the escarpment, such as Matt Bromen Park and Armes Lookout. 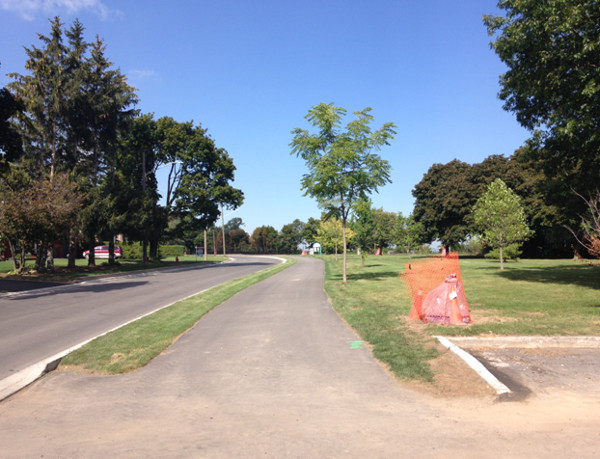 Automobile parking spaces beside the pathway are off to the side of the road. 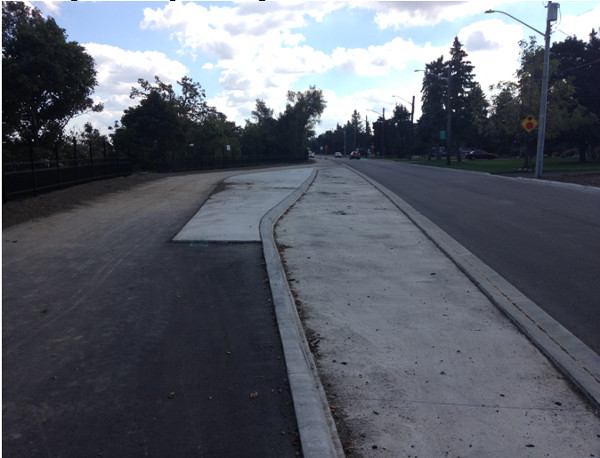 New fencing is black and runs along the escarpment edge. 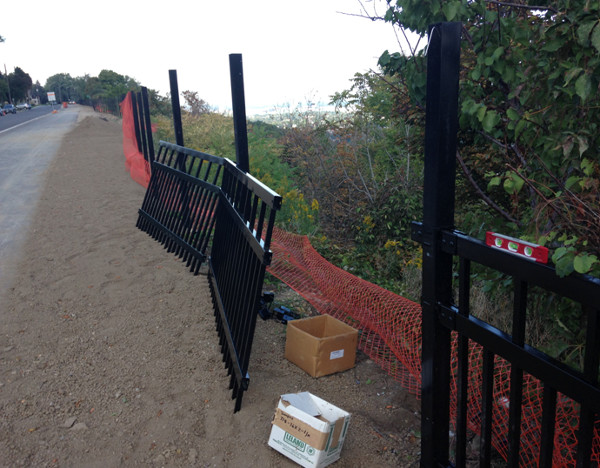 The pathway also connects the metal staircase at Margate Avenue with the Uli's Stairs, located at the intersection of Fennel Avenue and Mountain Brow Boulevard. 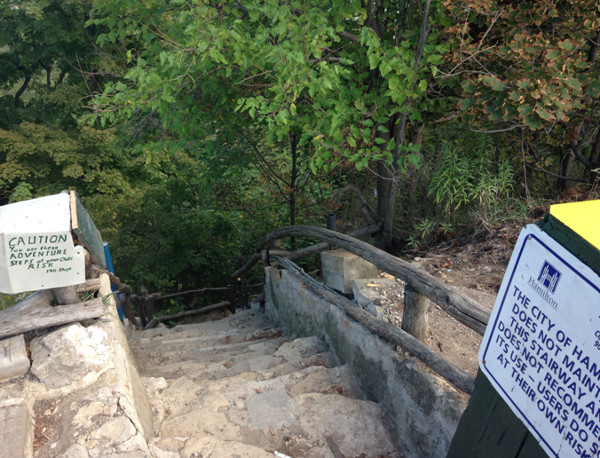 A water fountain has been installed at the Mountain Brow-Margate stairs. 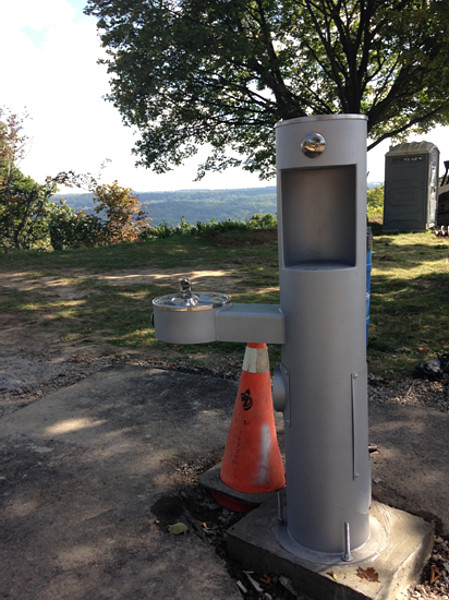 Already functional, this water fountain has three spouts. The top is designed to fill water bottles, the middle part has a traditional push button drinking fountain, and at the bottom is a low spout and bowl for dogs.

This is an excellent location for a fountain. Many people often do exercise at these stairs.

With over 380 steps, the Mountain Brow-Margate staircase connects the East Mountain with the Escarpment Rail Trail and the lower city. 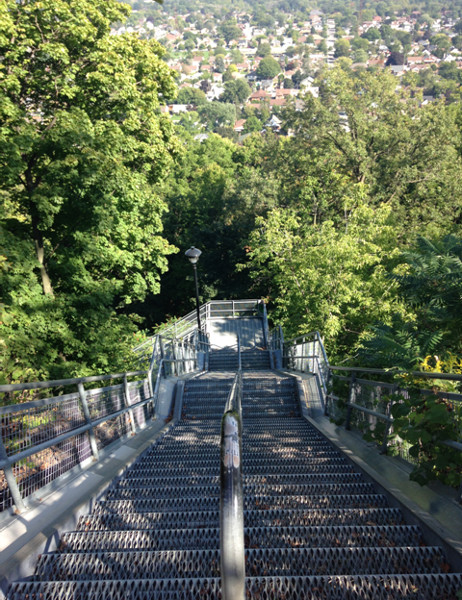 At the other end of the new pathway is the intersection at Mountain Brow Boulevard and Oakcrest Drive, just north-east of Sherwood Secondary School. 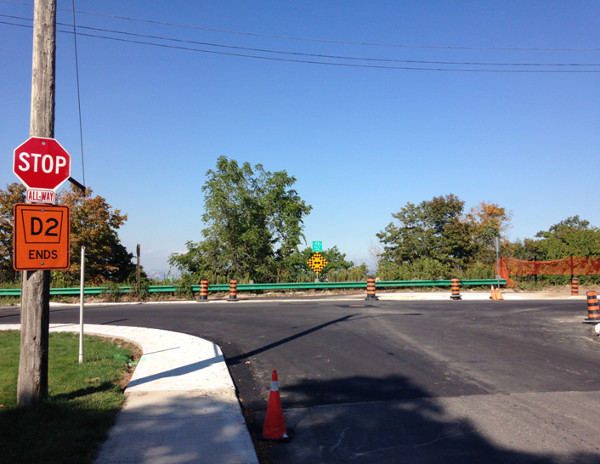 Jonathan Lambert is a returnee to Hamilton, Ontario. In between studies at the University of Toronto and stellar pick-up soccer, he enjoys taking in Monday night Hamilton Red Wing home games.

a great improvement to an area that has always been well-trafficked on foot by people who live close by and those who bike or jog there for the lovely scenery.

Great project, and done well it looks like. Sadly, we missed an insanely easy opportunity to link this pathway with the west end of Concession/Sam Lawrence Park area, and we missed a further simple opportunity to link West 5th over to Garth with a similar off-road path when the new hospital was built. We could have had a seamless, safe cycling route along the Mountain Brow from the Scenic Drive entrance to the Chedoke Radial Trail in the west to the Escarpment Rail Trail in the east.

This new path needs to be continued around the traffic circle and over to Mountain Park Ave. From Mountain Park and Belwood. From Belwood to Sam Lawrence we had a golden opportunity for a new bike path, but instead chose to narrow Concession and use the extra space for coloured concrete next to the sidewalks. Belvidere to Rosedene would have linked this area to the new St Joes Hospital site on West 5th where no cycling path was built when the entire site was torn up the past few years. Would have been an easy off-road link to Garth and Scenic Drive.

One of these decades it would be awesome if Hamilton actually had a plan for transportation modes other than cars. Instead we get piecemeal projects with no safe connections and one-off cancellations by councillors who perpetually live in 1970.

Yeah, why would you want your multi use path to connect to other stuff on either end? Why can't folks just be happy riding their bikes back and forth between Mohawk and Oakcrest? We should just be grateful for whatever the city bothers to do instead of demanding excellence.

Screw that. Unless you're relocating Syrian refugees, curing Ebola, decommissioning nuclear weapons or ending human trafficking, you should just stay home and do nothing because your problems aren't important enough to do something about. :P

Dont know what comment you read. The one I read started with a compliment "Great project and done well it looks like." Then it pointed out missed opportunity to connect it to the Concession Street complete redevelopment, which has fancy colored sidewalk instead of bike lanes. Then it pointed out other ways to improve the network of bike lanes the city didn't take when it rebuilt other streets around the same area. Only the last sentence has any sarcasm in it, and it seems pretty justified when you look at how little this city has done to make it easier to bike somewhere.

I'll just ask that you browse this site and read any other comment this person has made. 'Incessant' is appropriate.

Hamilton could use more people being "incessant". There is way too much "oh well, good enough" going on, and it's been going on for generations.

I have no problem with advocacy and keeping our elected officials on their toes. It's just the constant negativity even for a simple feel good story like this one that gets grating after a while.

So I'm assuming that means you'd be fine with this suggestion copied from below?

let's close the Linc off just west of Dartnall and just east of Upper Wentworth. Then, you'll get to celebrate too.

I don't really understand the Dartnall road thing and I don't want to get into some extended argument about this. If you think I'm a troll then please don't feed me...

that quote was simply an example of what it would look like if we built car infrastructure the same way we build bike infrastructure. No connections, just a small stretch of highway to drive back and forth on via the Upper Gage ramps.

Well the city rarely gets it right - it has to be acknowledged, it doesn't help any of us to just ignore the issues or we will never do it properly

like I point out below, imagine we built our road infrastructure with the same connectivity as we do everything else? These posters would flip their lids.

Please illustrate for us how that argument is a strawman

It is not, actually. His username is JasonAAllen. But stay classy.

Ok, will do Cory.

let's close the Linc off just west of Dartnall and just east of Upper Wentworth. Then, you'll get to celebrate too.

Interesting factoid: Most #HamOntStairs have their own twitter accounts.

I'm going to stay out of the whole connectivity debate and mention how impressed I am with the new water fountains. As someone who uses the rail trails in the West & East I really appreciate being able to easily fill my water bottle while on a ride. Whoever ordered these units should be commended. It's the little things.

The water fountains are absolutely brilliant, but......it's too bad we can't have public washrooms or outhouses along some of these paths. The City can't put them in, I'm told, because of ongoing vandalism issues.

agreed. I'm amazed how often I try to map out fountains on a ride, especially in hot weather. Dundas Valley Centre has one, and there a few along the lake-front and West Harbour. But they are really lacking in the city. I'm aware of new ones like this at the bottom of the Chedoke Radial Trail, top of Wentworth Stairs and now here. Hope to see dozens more.

Especially the dog ones. I'm always grossed out when I see a dog owner letting their dog drink from a 'people' fountain. The one at HAAA park is out of bounds for me now...

it would be nice if the by-law officers would stop by the HAAA grounds often again. it was cool to be able to go to the park and not have to worry about someone's untrained little abomination of nature jump all over you.

there was this one kid actually trying to play soccer and this dog just wouldn't leave him alone and obviously a young kid isn't going to be able to assert himself to an adult who finds the whole thing a load of fun because "who would think my annoying yappy designer dog isn't so much fun?"

dog parks probably shouldn't exist given how badly our society needs to get outside and exercise, but they do so let your dog run free there or just get a cat or fish or something.

props to the people who train their dogs properly though.

Agreed. I think the bar for dog ownership should be a lot higher and the penalties for not controlling your pet much more severe.

I recommend a Springer device for high-energy dogs. This allows the dog to safely run beside a bicycle.

I love these 21st century fountains. Much more sanitary design.

Rode up the rail trail to this new pathway tonight. It's a gorgeous ride. The new path is fantastic. Would be nice to see the Brow path behind the Henderson Hospital widened to feel more like this new one.

For anyone not wanting to risk their life, the ride up and the ride along the new path was really enjoyable. One could easily go up and then turn around at the Traffic circle and head back downtown via the trail.