More and more, we are seeing Councillors and city staff oppose developments that are actually supported by local residents.

The recent week-long twitter saga between Ward 8 Councillor Terry Whitehead and a cast of hundreds over the virtues of traffic calming on Aberdeen Street got me thinking about the increasing tendency of people to oppose any and all development. 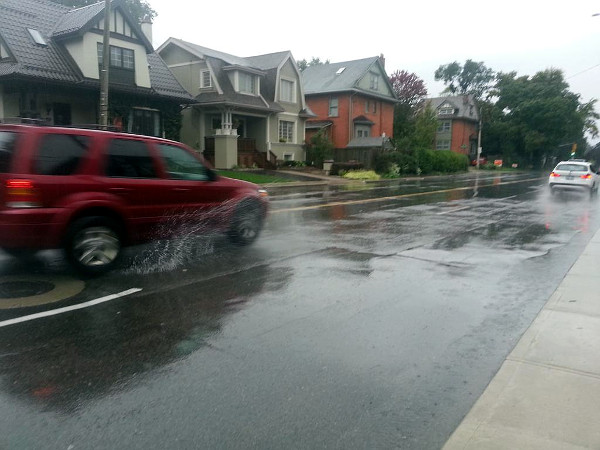 Getting splashed on Aberdeen Avenue during rainfall (RTH file photo)

This reflexive opposition is often called NIMBY (Not In My Back Yard) or, in more extreme cases, BANANA (Build Absolutely Nothing Anywhere Near Anyone). These are now pejorative terms that are used by developers or local government to dismiss the arguments of local residents against a new development.

The terms rose to prominence in the 1980s, and typical examples include opposition to group homes, wind turbines, waste treatment plants and big box developments.

Throwing around the term "NIMBY" can be an easy way to avoid addressing genuine concerns. However, it is true that almost any project, no matter how minor, tends to catalyse some kind of opposition movement. This was probably always true, but zoning and environmental regulation (along with mandated public input) mean that it is easier to try to oppose a new Walmart in 2015 than it was to oppose a slaughterhouse in 1915.

But the Aberdeen discussion (with Councillor Whitehead on one side and everyone else on the other) was actually something very different, and it seems to be becoming increasingly common in Hamilton.

Only In Other People's Back Yards

We saw a City Councillor reflexively opposing change in another Councillor's neighbourhood. In other words, he was actually being a NIYBY: Not in Your Back Yard. We're seeing this more and more: residents, councillors and city staff are opposing developments that are actually supported by the residents.

This is the mirror image of NIMBY! In the case of street calming, bike lanes, or pedestrian crossings - all of which have been opposed in wards 1 and 2 by councillors from outside the wards - the position is actually a form of OIOPBY: Only In Other People's Back Yards.

The opposition is entirely based on the concern that street calming will make it slower or more inconvenient to drive through other people's neighbourhoods. But, of course, these same people would never want to live on these sorts of streets themselves.

Consider the case of Councillor Ferguson opposing street calming in the lower city while being justifiably proud of the street calming he achieved on Wilson Street, not to mention the default 40 km/h limit in Ancaster. 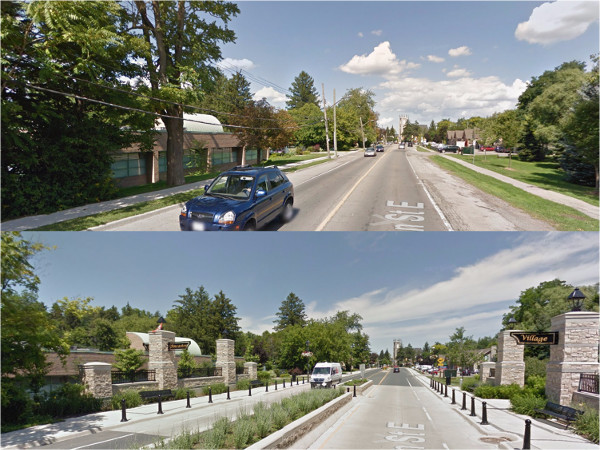 Strangely, this micromanagement of sidewalk widths, lane directions and crosswalks is not a two-way street.

Yet projects in the suburbs - even multi-million dollar roads or highway interchanges - sail through smoothly with no debate whatsoever.

Lower city councillors exercise collegiality in not dictating to their suburban counterparts how to reflect their constituents' values in their preferred street designs - but the suburban councillors adamantly do not return that courtesy.

It clearly isn't a matter of cost. The kinds of changes lower city residents seek are extremely cheap to implement, especially compared to the suburban road projects that escape close scrutiny.

It seems instead to be a feeling that the "downtown belongs to everyone" whereas other parts of the city belong to their own residents.

That sense of stewardship and concern can be a good thing for a city: the health and success of the downtown core is indeed important for the entire city.

Unfortunately, for many suburban councillors the concern starts and ends with whether the change is perceived to benefit car commuters cutting through the lower city on their way to somewhere else.

Stranger still, we're now seeing downtown projects and initiatives that are strongly supported by the local community but opposed by councillors representing distant wards that would see little or no effect.

This NIYBYism is even stranger than OIOBYism, which is at least straightforward hypocritical self-interest. 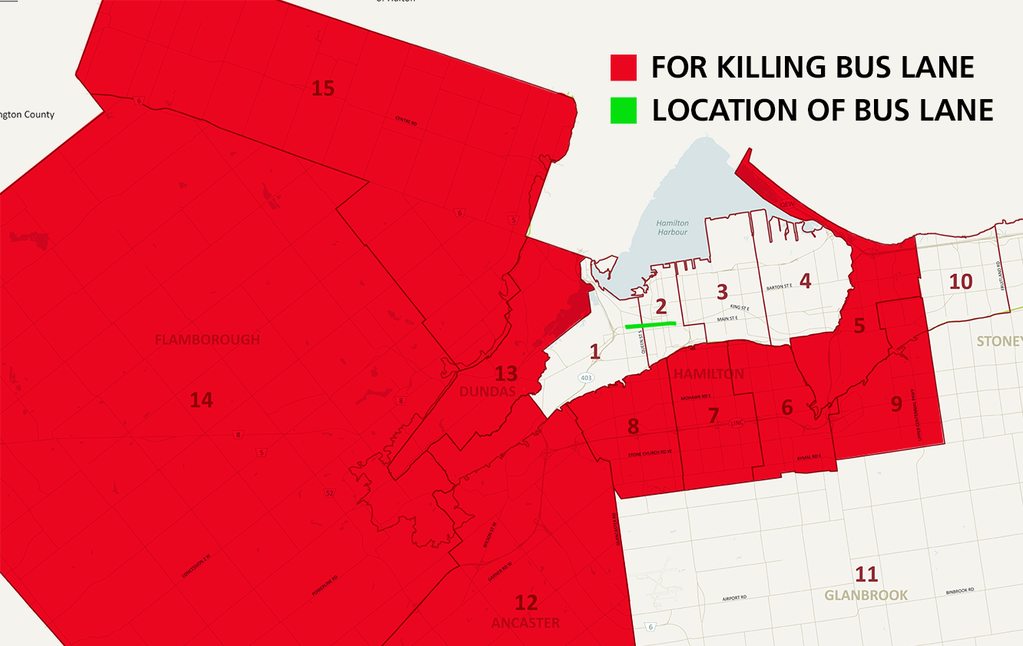 In a few of these cases, like the Cannon lanes and bike share, Council eventually decided to support them - but only after extremely long, excruciating debates filled with hyperbole, fearmongering and anti-urban rhetoric.

In addition to Council's position - or perhaps in reflection of it - City staff have also reflexively opposed various new businesses and amenities like patios, despite strong support from the local community.

We're now in the strange position where local residents are coming out in force to show support for zoning changes for new businesses, like the proposed cafe at the corner of Charlton and Caroline or the Rolly Rockets patio at King and Locke, which staff opposed but the Strathcona Community came out in force to support.

Lower city residents have become nervous that zoning changes for new businesses will be rejected out of hand unless there is strong and active community support!

Instead of the NIMBY stereotype, what we are seeing in much of the lower city is that residents are relatively open to positive change, perhaps more open to change than residents in other parts of the city.

They care deeply about where they live and they can see what is standing in the way of their neighbourhoods achieving their full potential. This is often outdated or overly restrictive zoning, combined with outdated auto-centric street designs that make pedestrian-oriented urban living uncomfortable and dangerous.

It would be great to have a citywide discussion about how to ensure the lower city - and especially downtown - can best achieve its human and economic potential.

But this discussion requires that we all agree that, just as in every other successful city, urban streets are first and foremost places where people live, work, enjoy themselves and run businesses. They are only secondarily a way of getting in and out of downtown as fast as possible.

And it is a good starting assumption that the people who live there have a good idea of what it will take to make those areas attractive and successful places!

If you wouldn't want to live on a four- or five-lane one-way street with narrow sidewalks right next to speeding vehicles, don't be an OIOBY and oppose resident-supported changes that would make those streets the kind of place you might want to live or shop on.

And the city should stop being a NIYBY and start facilitating development that the residents support, even if it involves a patio or a new use.

One idea could be to have a small board that actually has the power, instead of all the councillors preventing us from moving forward.

It's really just a further cost of sprawl development. People who choose to live long distances from where they work and play need the liveability of other areas to be sacrificed in the name of their convenience.

Those who choose sprawl development/living should bear it's true cost; and it's more than financial. Part of the cost is time - that it will take YOU longer to travel to where YOU want to go. Your neighbourhoods aren't built to be sped through - you shouldn't expect others to be built any differently.

Absolutely true. There's also a mentality that downtown and the lower city should function for the benefit of the entire city while suburban communities are only for those who live in them.

For instance alot of people who live outside downtown like the idea of car centric one-way streets because they offer a convenient route to highways. They couldn't care less about downtown and the communities that those streets run through, for them, downtown functions best when it's easy to travel through at high speeds with synchronized lights.

It's a what's mine is mine and what's yours is ours mentality.

exactly right. The spots I encounter with the slowest traffic and most light sequences at a red are rush hours on Wilson in Ancaster Village and King in downtown Dundas.

It's one of the things that makes those areas great for pedestrians, cyclists and businesses on the street. That those councillors strongly oppose the same chance for success on streets in our lower city neighbourhoods says all we need to know about their level of giving a darn about Hamilton.

Good piece, I believe what we're really dealing with is a variant of the golden rule ...

Terry is protecting his residents on both sides of the issue. They are buffered in their neighbourhoods from high-speed traffic, while in the lower-city/downtown neighbourhoods their presumed "right" to high-speed, unimpeded access is maintained.

Of course, part of this is the classic driven to drive problem with postwar built-environments.

Great article, Nicholas. You hit the nail on the head with:

"Lower city residents have become nervous that zoning changes for new businesses will be rejected out of hand unless there is strong and active community support!"

The support for the cafe at Charlton and Caroline was way over the top because, although neighbouring residents could see it's a perfect location for a cafe, the zoning was out-of-date, so we felt we had to be loud and clear with the COA.

In most cases, lower city residents tend to be more engaged because we know the consequences of bad decisions.

If mountain councillors proposed calming Mohawk, Fennell and Garth and turning them into more pedestrian and cycle-friendly streets, I would cheer them on. Unfortunately, the reverse is not true.

We do need some kind of urban/suburban split off on voting in council.

Your visceral disgust with "the core" is so blatant I'm surprised even you can't see it. You hate downtown and have nothing but contempt for people who live there (as opposed to people who are "forced" to go there) and don't care one bit how much your selfish desire to speed as fast as possible through those people's communities with your nose in the air affects their safety and quality of life. You are a psychopath and you need to go away.