Hamilton Bike Share has already generated 7,500 active members, almost 200,000 trips and 426,000 kilometres since it launched this past March.

An information report presented to the Monday, December 7 Public Works Committee meeting provides an encouraging update on the status of Hamilton's new Bike Share program. I can't link directly to the report, since the City's Council/Committee website is an unusable quagmire, but you can access a short-term link to the report under item 5.1 in the meeting agenda. 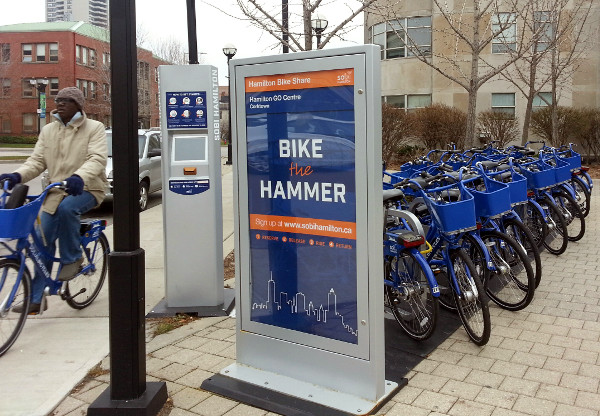 The bike share program was funded with $1.6 million in capital funding from the Metrolinx Quick Wins fund. The system uses technology from Social Bicycles and is operated locally by Hamilton Bike Share Inc, a not-for-profit corporation.

Hamilton Bike Share has been officially in operation since March 20, 2015 after a two-month pre-launch beta test from January 16 to March 19. Both membership and usage have exceeded staff expectations.

The staff report notes that the system has some 7,500 active members out of a total of 8,700 people who have tried the system since start-up. 1,227 members have annual memberships, 800 have monthly memberships and 5,527 have pay-as-you-go memberships.

While revenues exceed first-year projections, the report notes that the system does not yet have a major corporate sponsor, which is needed for the bike share to become revenue neutral by the end of the three-year pilot. Efforts to secure a corporate sponsor are ongoing, but I hope its early success at attracting riders and usage will encourage a company to take the plunge.

The report also notes that the service area is much larger than was envisioned when the bike share system was proposed. It has been extended west into Dundas, east to Ottawa Street and south to the top of the Escarpment for a total service area of 38 square kilometres.

As a result, some areas have a density of stations that falls below the level necessary to make bike share a highly convenient, usable transportation system.

Ridership grew rapidly after the official launch on March 20 and averaged 2,139 km per day during July and August, with a peak of 3,046 km on July 7.

From January 16 until December 6 this year, Hamilton Bike Share members collectively took 196,539 trips, covering a total of 426,419 kilometres. For a sense of scale, that represents 10.6 trips around the earth at the equator. 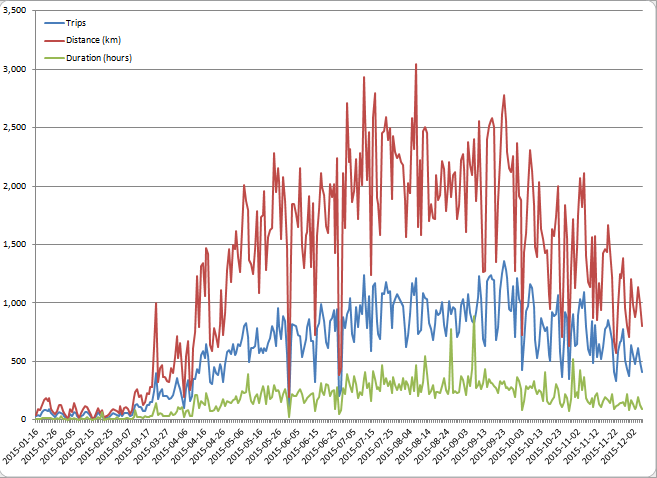 Daily ridership continues into the colder season. From December 1 to 6, the members took an average of 512 trips a day, riding a total of almost 1,000 km a day.

But with winter nearly upon us, Hamilton Bike Share will be reducing the fleet by 20 percent and taking some low-use stations, like the hub on Van Wagner's Beach Road, out of operation until spring. The following hubs will be closed for the winter:

As a personal anecdote, I rode several bikes last January through March during the beta test, and found the bikes to be highly performant in winter weather. They are heavy, sturdy and have a low centre of gravity, so they feel very stable even in snow and ice.

Currently, the density of hubs gets thin east of Wentworth Street, where the neighbourhoods have more low-income residents and have been identified for support under the City's Neighbourhood Action Strategy. Hamilton Bike Share Inc and city staff would like to extend service further wast through an Everyone Rides Initiative (ERI), which would add five to seven new hubs and 75 to 125 new bikes. 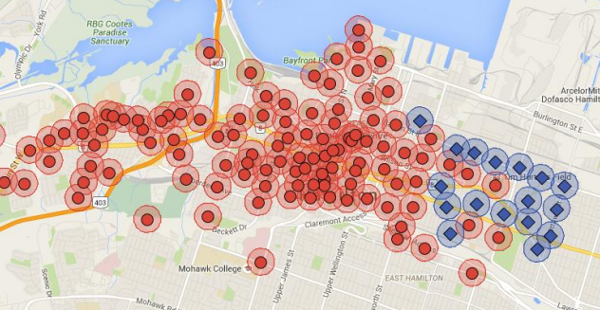 As the report notes:

The ERI pilot program aims to install bike share infrastructure in underserved and low income communities, while also providing supports for residents in the form of subsidized access, education and trip planning to ensure that the infrastructure is highly used and successful.

The capital, design, implementation and operating costs for this initiative are expected to total a little over $500,000. The work to date has been funded with a $25,000 grant from Union Gas.

So far, staff plan to submit a funding request to the Federation of Canadian Municipalities (FCM) Green Municipal Fund for half the cost, with the balance proposed to come from the following sources:

The research from other cities indicates that the program will be more successful if it includes efforts to reduce the barriers to access for low-income residents.

If I ever start a punk band (after having first acquired to ability to either sing or play a musical instrument), I am going to call it "Unusable Quagmire". I will give you full credit, of course.

Some of the expansion stations have now apparently been installed, using the freed-up racks from the winter-closures.

This is only one block from my home! I was the first-ever to dock two bikes to it, thanks to a heads-up by Stanley from Facebook. I printed and waterproofed some wayfinding signs, and attached them to strategic locations since people keep docking them all over the place nearby, and may not be currently aware of this brand new SoBi station!

So that's where the sign by the church car park came from!

The hub is getting actual use. I have seen it fluctuate from 0 to 7 bikes and then back. It appears already a quite popular hub. This is near the boulevards (Proctor, St Clair, south of King) so probably relatively-speaking more affluent. Still lots of rental dwellings here too, so a mixed income neighbourhood due to the mix here.

More low income memberships is an excellent idea; as long as effectiveness is measurable and accountable -- I want to see good effective use of these, without stolen SoBi issues from people without credit cards.

Fortunately, the SoBi fleet is fully GPS tracked. I have heard anecdotes from some SoBi contacts about bikes being brought indoors, the GPS trail disappearing into a door, and being subsequently rescued by SoBi staff who knocked on the door, Even saved a SoBi bike from being about to be disassembled! I also hear the bikes also have remotely triggerable alarms as well, which assists in quick recovery.

Is it possible to get a version of that heatmap with a better colour scale, or at least a legend showing approximately how many riders (per unit time) correspond to how bright each blue line?

Ditto. Seconded! A wider color gradient would be nice, like the heat maps found in some other cities.

The original budgeting was based on a bixi style model which has 24 and 48 hour passes, escalating overage charges, and fees for not checking the bike in every 30 minutes - none of which the Hamilton system has so there isn't a perfect 1:1 relationship of revenue types.

You know sending other people scurrying to look things up for you is not what is meant by 'fact checking' ... right??

What "other side" are you talking about?

If there is something missing from the story, "fact checker", then tell us what it is. Otherwise stop insinuating that there's "bias"

Someone posted an answer up there for ya, "bud". Notice you conveniently ignored it.

Or you could look up advocacy in the dictionary.

yea, as opposed to standing in mailbox holes.....

I'm going to guess that you share the agenda item to your own email and that gives you a copy/paste (able) link to use. Right?

Actually, I go to the page that's 1 page before the actual page, and then right-click, "Copy Link". Paste. (And verify URL doesn't have a long hexadecimal number -- those are the URLs that are temporary)

HEY - you two better watch those terms of service violations!

So when is the Hwy #6 boondoggle (or any other car infrastructure project) going to be expected to have a corporate sponsor?

Well you're half way there.

I hope the next wave of hubs includes Ottawa Street (I can't really tell from the map since its small). I live much farther East than that (Woodward Avenue) which is why I don't have a membership yet but if it comes East to Ottawa, that might push me over.

Its definitely ottawa st. Looks like 3 Ottawa St racks - Barton, Queenstown and one in between

On the heatmap, I notice that there's no blip of bikes on Concession St in this heatmap. But I also observe Concession St was shut down completely because of ongoing construction.

It will be interesting to see what bikeshare statistics for Concession St will be for 2016!

That heat map is only 5 days of riding

hopefully the Sobi maps can pin-point how many ride on the sidewalk vs road on Concession. Someday when we need to rebuild that street maybe we can add bike lanes....