The final designs are not yet complete, but the two-way conversion of Wentworth Street should be complete in time for the start of school in September 2016.

On Monday, October 7, Ward 2 Councillor Jason Farr and Ward 3 Councillor Matthew Green hosted a public information meeting with City staff on the upcoming two-way conversion of Wentworth Street, which City Council recently approved. It was held at the Mission Services building at 196 Wentworth Street North there were approximately 75 people in attendance. 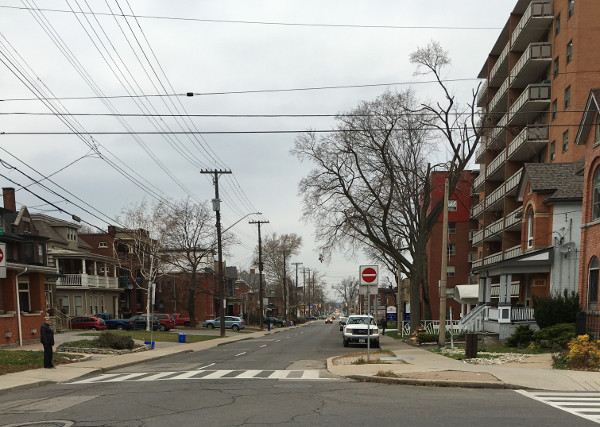 The meeting started out with some naysayers, most of whom were concerned about parking. There was even one person who said that this street has been working for 50 years, and why do we need to change it!

It was stated early in the meeting that this is an information meeting for discussion and questions, and there was a lot of that.

The final designs are not yet complete but this two-way conversion will be happening. If there are no major issues, it is hoped to be complete in time for the start of the school year in September 2016.

The roadway will be two lanes southbound and one lane northbound, with a number of changes to the parking arrangement. There will be some lost parking as a result.

The overhead cross-sections below are marked as follows:

At Barton Street there will be a slight adjustment for southbound vehicle traffic that will erase the lane shift and add a right-hand turn lane.

City staff are still working on the Main Street intersection, as it is going to be a bit tricky for larger vehicles turning left. There will also be some truck route considerations.

At Delaware Avenue, there is currently a bumpout on the northeast corner. Everyone was surprised to hear that this will not be moved because there is a large hydro installation below it. To move this would cost many times more than the entire project. It's not clear to me how this will be worked out. 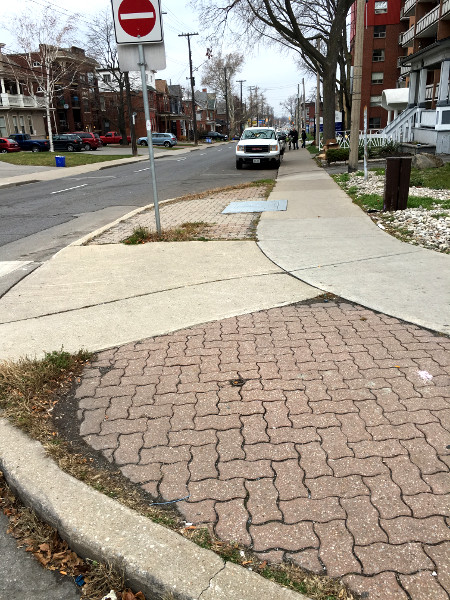 There were numerous questions about cycling infrastructure and I think that everyone agreed that there really isn't enough room.

What is expected to happen is that when Sanford Avenue is converted to two-way (or maybe before, I'm not sure), that will become the north-south cycling route. There is ample space and low traffic volume on Sanford.

Another concern was in front of Cathedral School, because people will likely be trying to drop of their kids in the only travel lane available. Perhaps a solution can be found off Wilson Street.

The staff information included a table of pros and cons of two-way conversion:

Bob Berberick has lived in Hamilton for all of his 65 years. For most of that time he lived on the mountain. Since moving to the core five years ago he has a newfound love of his city. Walking and cycling was re-started and he can only hope that the conditions improve so he can continue to explore the hidden beauty here.

If I was a resident there, I'd be fighting this lame TWINO plan from the city. 1-lane each way is all we need, with parking on one side or bike lanes both ways.
Having parking on one side helps the residents, as well as provides space for a left turn lane at signalized intersections.

Part of me hopes Whitehead is successful with his idea to halt all road diets or two-way conversions downtown until we have a complete change-over in staff.

This. The whole street should look like it looks at Delaware; one lane each way with parking on one or both sides and bumpouts at intersections for ease of pedestrian crossings (or turn lanes at intersections where there is a demonstrated need).

Spend the money and do it right or don't do it.

"Another concern was in front of Cathedral School, because people will likely be trying to drop of their kids in the only travel lane available." You mean in the No Stopping zones? what else is new. Whatever they do with Delaware & Wentworth corner, got to be better then its now

Why are trucks turning left from Wentworth onto main? I mean other than local traffic... Shouldn't eastbound trucks be on Burlington?

This city is sooooo sad. Conversions executed like this have to be designed to encourage people to stop asking for them. Manufactured Sturm and drag at its finest.

Curious how streets like Wentworth must be configured to allow room for cars to pass each other yet streets like Upper Paradise get the exact opposite treatment.

If only it were just a coincidence.

the most logical and simple idea for Wentworth is to basically take a cross-section like Concession Street and apply it here. Except only parking on one side, not both. 1 traffic lane each way, and a few parking spots are removed approaching signalized intersections to allow for left-turn lanes. Done.

This street carries WAY less traffic than Concession. Absolutely no reason to have 2 lanes in one direction.

I live on Wentworth and was at the meeting. I was excited to see it finally go 2 way until I found out it it will be 2 lanes southbound.

What the hell is the point? Now we'll have more traffic with cars coming north because they wont need to take Sanford to come north ant longer. No bike lane..more cars, same speed limits. Ugh.

Maybe good time to sell up.

exactly right. This plan actually creates MORE traffic for your residential street. Not sure exactly which neighbourhood associations are in this area, but you may want to contact them and share your concerns. The conversion won't be happening until next summer it sounds like, so there's plenty of time for residents to speak up.

Ryan posted the traffic data a few comments above. Keep in mind that a single urban traffic lane is designed to carry 10,000 cars per day. They're going to be giving you two of these lanes southbound, which equals a 20,000 car capacity. Current numbers show a MAX of 4,000 cars per day travelling southbound. Incredibly dangerous and irresponsible for staff to even think of overbuilding this street like this when they know how dangerous our overbuild roadways are with speeding.

Beware the law of untended consequences.

What rationale was provided for this kind of street conversion vs. Two lanes each way? Surely their is some reason for this idiocy, is there not?

This website wants to mess up Hamilton traffic. If you want density city, two ways traffic, subways, streetcar or LRT... Please move to Toronto and enjoy stressful life there.
Let people like me enjoy Hamilton.

What street do you live on? I'd like to come enjoy it.

I personally don't find it enjoyable living in a city with a much higher injury and death rate. If more people are like you, then let's put it as the front cover of our next Globe and Mail insert promoting Hamilton:

"Move to Hamilton. You've got a WAY better chance of being killed by a speeding car driver than in gross Toronto!"

This is a great article about one way vs. two way. Inner city highways are great for the people who want to drive really fast on them, and horrible for everyone else.

I live on Wentworth St. I own my home. I like the fact that it is becoming two-way again after 45 years. It is long overdue. What I do not like, is the fact that this street with both an elementary school and a high school on it, will not be removed as a truck route during and after this conversion. Companies like Air Liquide and Canadian Tire and several others use this street as a cut through from either Barton or Burlington Sts. Truck traffic should be moved to Wellington southbound and Victoria northbound. The posted regular speed limit should be reduced to 40km/k during regular hours and flashing 30 km/h during school hours. I like to sit out on my porch from time to time, and it affords me the opportunity to watch the trucks swing over three lanes to make the narrow right turn due to the loss of a lane on Cannon St for the bike lanes (which I fully support). I also get to see dozens of cars race past Kathy Wever elementary on their way to miss the lights at Cannon; easily doing 20 or more km/h over the posted 50 km/h limit. I sent these suggestions through to Councillor Matthew Green's email, with not even a response. There are no signs up warning of the impending changeover. No further communication from the City to state that work was beginning or had began. No reminder that parking would be lost in several areas. I don't know about everyone else, but I can't wait to see when they install the bus-sized fan and watch all of the stuff that hits it.