Porch Bikes Point the Way to a More Sustainable City

Think of all the space we save on parking when we encourage more people to use a bike to get around.

I was walking just a few blocks around my house this week and noticed lots of bikes parked on porches. I snapped these photos. 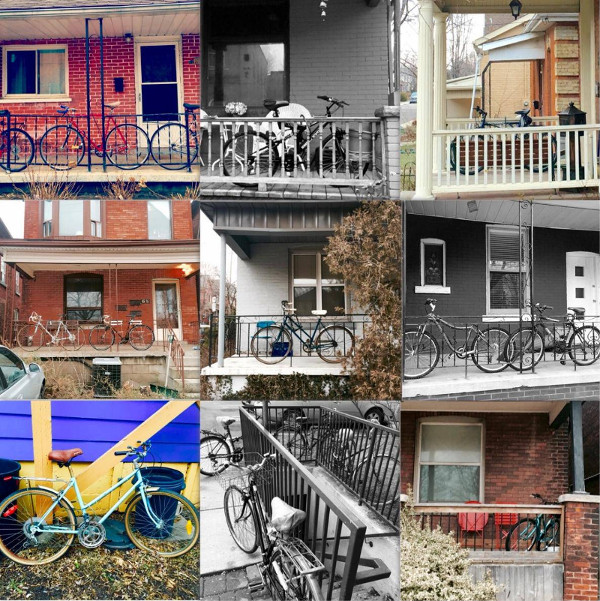 Bikes on porches in Strathcona neighbourhood

It hit me: think of all the space we save on parking when we encourage more cycling! If these had been cars instead of bikes, they would have covered the entire front lawn of these houses instead of standing nicely against the porch railing.

On the flip side, I've seen so many nice front gardens and mature street trees cut down in our neighbourhood over the last several years to fill the entire front with a parking pad that doesn't even fit average-sized cars. There are even small four-door cars blocking half the sidewalk.

So we lose the canopy and greenery on the street and instead we get parked cars sticking out, blocking the sidewalk and impacting local walkability.

All the more reason we should be doubling our efforts to encourage more people to regard cycling as a legitimate, convenient way to get around.

Right on! Myself moved to Hamilton because we could afford a house has gardens in backyard and own a car that help us easily to moving around and quickly. Wish we never have to live in small condo like we used to live in Toronto.
This site and its agenda is destroying THE GOOD THINGS OF Hamilton.

My house has 3 bikes on the porch and no cars. Fine with me. I'd rather have a house than a car. Also, I work here.

as crappy as his comment is, there are really only a few neighbourhoods where the city bothers to modify infrastructure to benefit cycling/pedestrian commuting and it's no surprise that it is in rapidly gentrifying neighbourhoods.

Not sure that's entirely accurate. The city only bothers in neighbourhoods where they are pressured to make improvements. Whether many of those neighbourhoods are also seeing a revitalization could be coincidence, or could indicate the types of people who are moving there now.

I'm going to guess that neighbourhoods such as Strathcona and Crown Point aren't loaded up with Bay St brokers who can't afford their cars anymore since moving here from Toronto, so they're loading 3 bikes on their front porch instead.

It's more a matter of local leadership. We finally have non-mid 20th century councillors at the helm in Wards 1-4. Not surprisingly, those wards are seeing some catch-up (albeit, slow compared to leading cities around the world) in the cycling/safer streets department compared to the rest of Hamilton.

The brains of the operation?

Had six bikes so far stolen off my front porch (even when locked.) Don't keep them on the porch anymore.

Dude I would have learned my lesson after five.

It was only two thefts. Once they stole four. The other time they stole 2. We keep them in the front room now which is not ideal. (Took our porch furniture as well)

Ohhhhh. Now that makes more sense. You had me worried there.. :)

And your furniture? That's just cold.

Way back when I was too trusting with my bike and never locked it. One day I parked it at the library - Peterborough / Trent U - way out in the sticks and when I came out my baby was gone. My innocence was lost that day ... my Kuwahara ET Special gone from my life forever!

However now I have another favorite bike and I find I leave it unlocked occasionally. I think it's just laziness really...

I leave mine unlocked all the time. No takers yet. It pays to ride a mom bike.

Everyone please make sure you are using a U-lock if your bike is locked outside your house. Thieves cut cable locks easily with bolt cutters. Also avoid quick release skewers on your wheels and seat. These can be replaced with threaded skewers that use a special allen key.

Toronto, for example, is considering banning front lawn parking pad conversions on the grounds that they increase rainwater runoff and resulting floods --- I've heard Hamilton also has a problem with floods