Even if it's not necessary to mitigate traffic congestion, converting Main Street to two-way will provide other tangible benefits that will increase the overall success of the LRT investment.

The August 8, 2016 General Issues Committee (GIC) meeting received a preliminary traffic modelling study on how the light rail transit (LRT) line will affect traffic across the lower city. (We can't link directly to the report because the city's committee website is broken-by-design, but it's under Item 7.2, "Hamilton Light Rail Transit (LRT) Project – Traffic Modeling Update (PED16180) (City Wide)" in the agenda.) 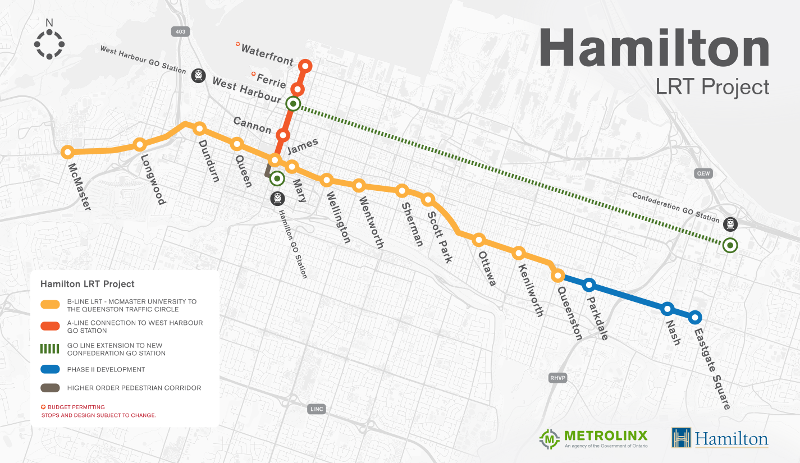 The study, prepared by transportation consultant Steer Davies Gleave, concluded that traffic congestion will increase by 2031 whether or not the LRT construction goes ahead.

Perhaps more surprising, it also concluded that 65 percent, or roughly two-thirds, of the intersections under study will be the same or better with LRT as they will be without it, and only 35 percent of intersections will be worse.

And that is before any traffic mitigation strategies are put into effect! Those mitigation strategies can include adjusting traffic signal timing and staging, adding dedicated turn lanes or converting streets to two-way. The takeway from this is that no major changes to the street network are required to adapt automobile traffic to LRT.

On the one hand, I'm not surprised by this, since so much of the lower city street nework is over-built. On the other hand, there are a lot of other good reasons for converting Main Street to two-way that are related to making LRT a success. These include: 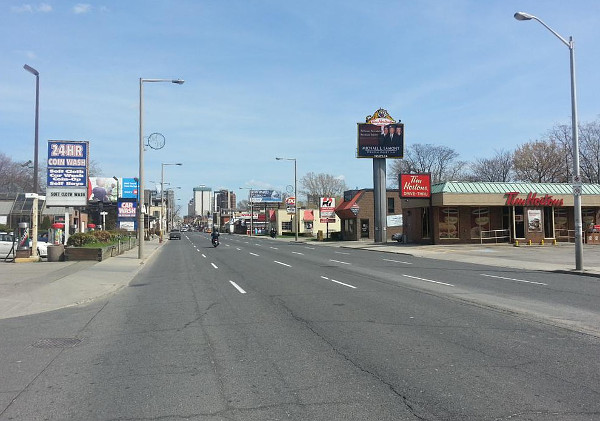 Ward 2 Councillor Jason Farr is going to push for modelling of alternative scenarios with two-way Main and other changes. In any case, I would be very surprised if two-way Main was not a big help, at least during construction.

Keeping Main Street one way might be possible from a traffic movement point of view, but it would just encourage skeptics to cling to the belief that everything else can (should) stay the same once the LRT is built.

Transportation researchers like Dr. Chris Higgins of McMaster Institute for Transportation and Logistics says we need to invest in making our streets more "complete" and inclusive in order to shape a dense, urban land use, encourage walking and local retail business, and maximize the economic uplift from our investment in LRT.

This is consistent with the 2010 Benefits Case Analysis by Metrolinx, which also indicated that a two-way Main Street is an important factor in the success of LRT.

We must not forget that Main Street is entirely within the development corridor identified in the planning and should benefit from the economic uplift of LRT if we do the street design properly. That street design is about making attractive urban neighbourhoods that are nice to live in, as well as destinations for those from other places.

In addition, converting Main to two-way will also make it easier for motorists who want to reach businesses and other destinations along the line, especially during construction.

It is fundamentally about the overall goal of helping the lower city revitalize economically and socially, which will generate more taxes, more jobs and more interesting places to visit. And that's good for the whole city.

Trying to cling to the view of Main Street as a mini-freeway bypass through the heart of the city will just make it harder to do all the other things that we will need to do to get the maximum benefit for LRT.

Following are tables of which streets will have a level of service (LOS) that is worse, the same or better with LRT.

My main worry is the western end of King.... it sounds like nobody is interested in reworking the 403 bridges. Even if Main gets converted to 2-way, they may preserve a 1-way gap for the bridges. With the 403 bridges remaining 1-way, then the Westbound traffic is going to have to get to an extremely difficult bottleneck of King/Dundurn. The most obvious solution is a pretty bad one: take the bike lanes off Dundurn North and provide two Southbound driving lanes to take Westbound drivers from York to King... but those bike lanes are an essential connection, at the absolute very least for the half-block from Head to Hunt.

Reading the report: those "Far-side" stops sound extremely space-intensive. Think about it, for an LRT to have a "far-side" stop on a two-way street, that means that every intersection that includes an LRT platform must actually have two LRT platforms, one on each side of the intersection.

I'm also surprised they listed King at Dundurn as a spot where they expect improvement with LRT, because it's such a bottleneck in the system. I guess the assumption is that much of the traffic in and out of the West End will be taken over by LRT passengers.

The capacity along the route of QueenStreet(southbound)/KingStreet(westbound)isr educed because of the LRT alignment. Vehicles choose the alternative route of York/Dundurn/King. The model shows a congestion issue at the intersection York/Dundurn for the westbound left turning lane which slightly reduces the capacity on York Street.T he mitigation priority in the next iteration of the model is to address this congestion issue.(Note: The previous TPAP model also identified a concern with this intersection.)

edit: aside, the city's PDFs are horribly formed, as you can see by the copy-paste - and that's after I regex'd out all the linebreaks. I wonder how well they play with JAWS or other screen-readers?

Yep. Mark my words, they're going to make Dundurn sport two Southbound lanes (incl. two Southwards turning lanes on York) instead of bike lanes, and possibly remove the Westbound bike lane on York Boulevard. Basically reproducing Queen's turning experience at Dundurn. Hopefully somehow we can get a bi-directional bike-lane still on York's Eastbound side (centre-aligned?) if they remove the Westbound one... but either way, the Dundurn bike lanes are an essential connection. Even if we get the Bay bike lanes, we'll still need Dundurn to get from Head to Hunt and vice versa for the Hunt->Dundurn->Head->VictoriaPark->Napier corridor.

I think York's bike lanes need to be turned into a Cannon-style cycle track to feel really useful / safe.

You could actually do quite a hefty amount of space optimization on York with that, given how the existing York bike lanes are hackily shoe-horned into a 6-lane road. Over the longer term, there's plenty of room for a multi-use trail on the side of York Blvd when beyond Dundurn. This would connect very well with an on-street Cannon-style York Blvd cycle track aligned on the same side.

I'm not sure how this will affect traffic planning in the LRT days, but this possibility could/should be accounted for:

A protected/barriered cycle track (Cannon style or better) on the northern edge of York (eastbound lanes) from roughly near Cannon through Dundurn -- then connects to a multi-use trail on the same side of road -- when beyond Dundurn Castle's parking lot. That little narrow asphalt sidewalk in the middle of the grassy areas can easily be widened to become a multi-use trail.

It makes a lot of sense, I think... (have to think this through...and the planners will have to as well). Overall (with other optimizations along with these) you might even be able to make York consistently 4-lanes all the way from Burlington to Hamilton, with a bit of fiddling of the allocation... rather than the current narrowed 2-lane sections from hacked-on bike lanes. That would provide some traffic diversion capacity (detour flow) during LRT construction near the 403 interchange -- this is one area where you can make both bikes AND cars happier -- methinks.

Actually, one bizarre option I'd thought of would be to do a centre-aligned physically-protected bike lane on the Southmost eastbound lane. The massive, well-treed median would provide some refuge for what's normally a harrowing idea - a bike-track in the middle of the road. The problem is that the bike track would have to veer into the cut-off area that's currently a turning lane, so it would be ugly and wobbly at intersections, but either way: left-turn actions on York are could be separately signalled and rare up to Dundurn, protecting the central bike track from any turning movements.

... this probably requires drawings. But basically, you continue the Cannon track in the middle of York Boulevard. You'd never even need to cross York to go from Cannon track to the York track.

I've wondered about that design as well. It could be continued all the way to Plains Road, avoiding the conflict where the ramps to/from the 403 pass right over bike lanes.

neighbourhoods along York fought long and hard to have those bike lanes installed. They've done wonders for making it easier to walk along the sidewalk and to cross the street. The point of changing our transportation habits going forward is to prioritize non-car options. To take away bike lanes so cars never see a red light 24-7 is about as bad as city planning can get. I don't imagine that idea will have any traction (other than the usual suspects in Ward 8 etc...)

Here are two great reads on how we should be designing Hamilton for the next 25 years....we can change the quality of life and transportation habits of our city with some proper planning:

You get the city you plan for...always

I know, the bike lanes are an important buffer between pedestrians and traffic - even if replaced with a single bi-directional lane, at least one sidewalk would be right next to a live lane of functionally-highway-traffic.

Unfortunately, it's hard to read this statement as anything but a plan to take away the Westbound lane:

Vehicles choose the alternative route of York/Dundurn/King. The model shows a congestion issue at the intersection York/Dundurn for the westbound left turning lane which slightly reduces the capacity on York Street.T he mitigation priority in the next iteration of the model is to address this congestion issue.(Note: The previous TPAP model also identified a concern with this intersection.)

I hear you. I'm simply saying that we've spent the last 50 years doing everything possible to alleviate anything that "slightly reduces the capacity on York Street". We need 50 years of prioritizing all other modes of transport if we really hope to see a balanced system develop.

Seeing the number of intersections proposed to have an F level of service even without LRT is telling considering how small our city is, and how overbuilt our roads are. We drastically need to see the number of cars per person drop significantly over the next few decades. Making every left turn a high speed breeze through rush hour isn't the way to incentivize other transportation modes.