Come show your support for the Herkimer and Charlton bike lanes and expanding the bike lane network across Hamilton.

If you haven't heard, there's been a bit of consternation at Council and on talk radio recently about the Charlton West and Herkimer bike lanes. But for us who live, drive, cycle and walk across the Durand and Kirkendall neighbourhoods, they've been a great addition to our neighbourhoods.

Traffic still flows smoothly, but there's but no longer any cars racing at 80-90 km/h, and biking and walking are easier, more pleasant and safer for residents of all ages to get to the many destinations in our neighbourhoods and beyond. 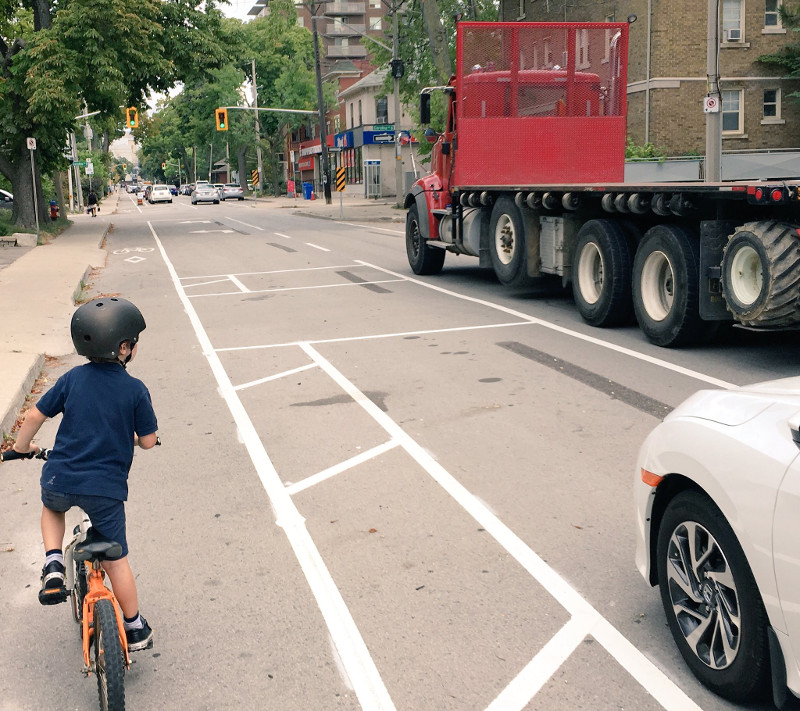 A child rides in the protected bike lanes on Herkimer while a transport truck drives past (Image Credit: Tom Flood)

Just two months after installation of these bikes lanes, it's clear that more and more people are choosing to cycle in our neighbourhood.

Just yesterday, a resident was walking on Herkimer and, surprised at how many bikes there were, took these photos in quick succession around 5:30 pm.

In the four-minute span that these three pictures were taken, seven cyclists were counted on the Herkimer bike lane (including a child riding as a passenger on his mom's bike) and one cyclist on Queen. In that same period the resident counted five cars driving by on Herkimer. 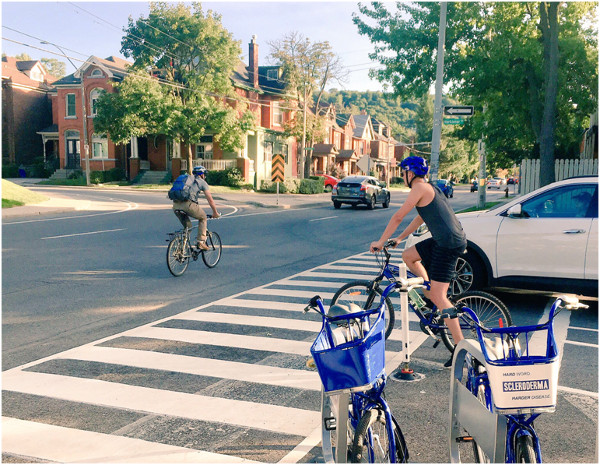 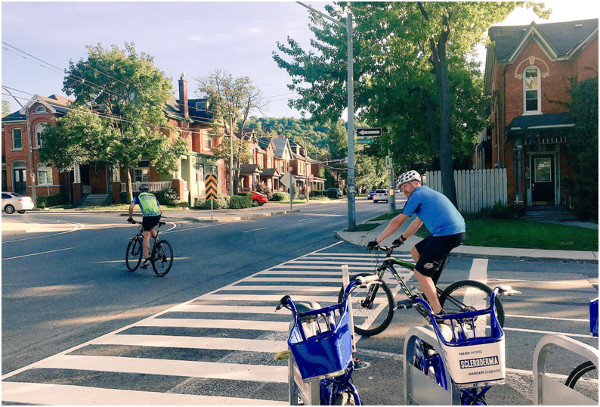 If you're curious to try out the bike lanes for the first time, or if you've enjoyed cycling more than a few times on them already, we invite you to join us for a celebration for these bike lanes and to acknowledge the progress our city is making on active transportation, which is helping Hamilton to become the best place to raise a child and age successfully.

The Bike Lane Celebration (Facebook event page) will be Saturday, September 24 from 6:00 PM to 8:00 PM. At 6:30 PM, there will be a group ride to enjoy the lanes together and stop a few times to discuss any suggestions for improvements.

The ride will start on Herkimer at Park St, then MacNab to the Charlton bike lane, then to the Dundurn bike lane and back to the Herkimer bike lane.

After the group ride, there will be lots of festivities at Durand Park, including music, face painting for children and a food truck.

And after it gets dark at about 8:00 PM, the Glowriders will join the celebration at Durand Park with their last ride of the year, which takes cyclists on a leisurely, fun group ride of about an hour passing through Victoria Park, Cootes Paradise, Bayfront Park and downtown, ending on Augusta Street in Corktown.

The Southwest Ad-hoc Bike Committee is a committee of residents and stakeholders from Durand and Kirkendall neighbourhoods formed to work with the City to support better cycling infrastructure.

While I'm decked out in cycling gear in this pic, I'm almost always in work clothes using these lanes to get to and from central Hamilton. I chose to ride, I also own a pick-up truck. While commuting to work I've never witnessed the 1/2hr wait I've heard mentioned in the media. While driving I've yet to experience anything more than a slowing and occasional stop at Bay. I've taken my 8 and 10 year old on these lanes to experience protected cycling in traffic (a little practice for a coming trip to Montreal). These lanes have been a positive addition to Kirkendall and Durand.

Finally racing at 80-90 km/h is absent at this route and cycles can safely ride along this road. I read this news earlier on http://thetermpapers.net/ how calm and beautiful the city became for cycling community with installing of these bikes lanes.