Salvage a Pavillion at Parkside

That Parkside School in Dundas is being torn down is frankly ridiculous. At least we may be able to save that magnificent front entrance as a shelter for future generations.

On October 3, 2016 a petition to save Parkside High School was presented to the Dundas Councillor Arlene VanderBeek. It contained literally hundreds of signatures of residents of Dundas who wanted their local high school saved or repurposed. 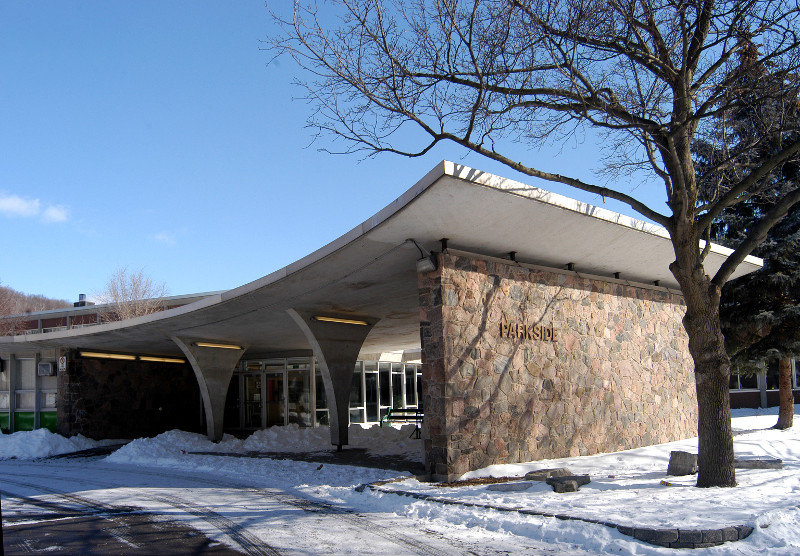 Shortly before Megan Hobson and I presented this petition, we were made aware of another petition containing over 500 signatures that had been presented a few months earlier. Dundas Works, a local activist group, put considerable effort into a plan to turn the property into housing.

We also discovered that other citizen's groups had requested meetings with Councillor VanderBeek presenting their reasons for not demolishing the building. Ann Gillespie, a well respected local historian, even prepared and submitted a cultural report.

None of the petitions, proposals, reports or arguments were successful. The demolition is still scheduled.

Many of the interested parties trying to save the building wondered why there had been no Cultural Heritage Report. Why was the Hamilton Municipal Heritage Committee (HMHC) not consulted? Why was there not a salvage plan?

It is the accepted protocol in town planning that any building over 40 years old be passed by the Heritage Committee before a demolition permit is issued. The 'comedy of errors' that led to the decision to demolish gets even more hysterical when you become aware of the slapstick antics of the Hamilton Planning Committee.

After consulting with one of the city's Cultural Heritage Planners, it would appear that there was a meeting of the Hamilton Municipal Heritage Committee to discuss Parkside on July 28, 2016. No, this is not a joke. Yes, that would be two weeks after the City declared its intention to demolish.

At that meeting, it was resolved that the property should be added to the City of Hamilton Register of Property of Cultural Value or Interest.

As well, it was resolved that a Cultural Heritage Assessment be completed for Parkside and that 'heritage attributes' be preserved. The HMHC determined that it was, in fact, an important building.

On August 9, 2016, the report was presented to the Hamilton Planning Committee. They did not approve the recommendation. How could they? The City Councillors had already decided to demolish the building. Why waste time looking at any heritage value?

Driving through Hamilton, you can see the wounded corpse of the James Street Baptist church - will it ever be rebuilt? - and the vacant lot on Queen and King where All Saint's used to be. Historic buildings are being massacred to make way for high rises while vacant lots one or tow blocks away remain vacant. 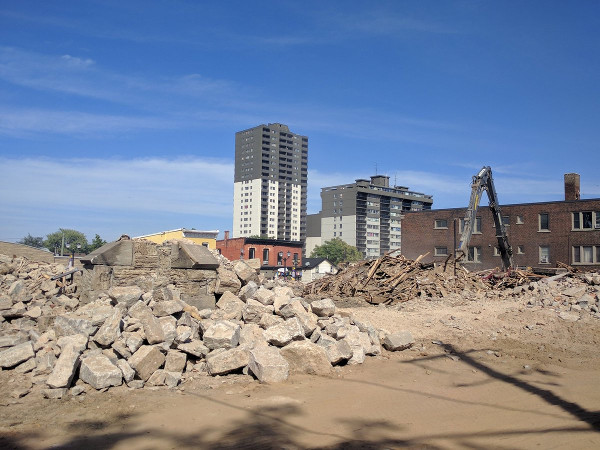 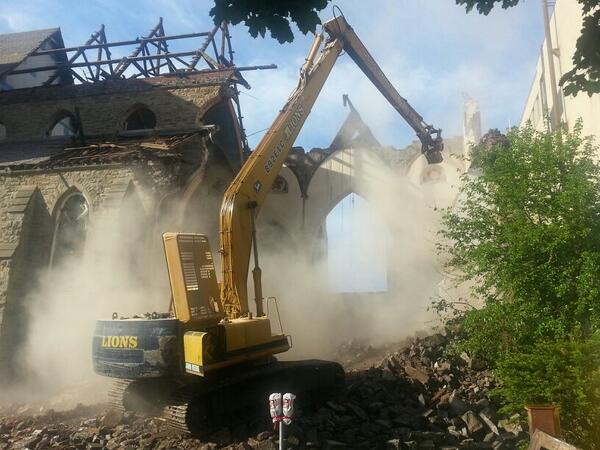 If City Councillors are not interested in any reports from the HMHC, how is Hamilton going to retain any of its historic properties?

As can be seen in the revival of James Street, it is always the artists who lead the way. The Jelly Brothers recognized Parkside as an icon of the city years ago. The planning committee still can't see it. 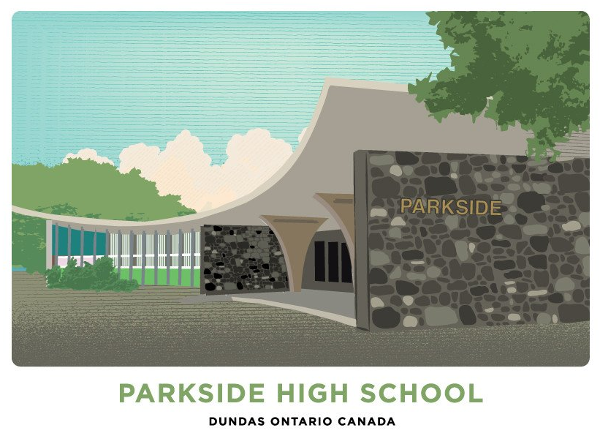 The major mass of Parkside High School will be torn down because it is right in the middle of the area needed for the cemetery. That decision has been made. The circular driveway on the west end, however, has been identified by Councillor VanderBeek to be saved.

Directly adjacent to that drive is the crescent‑shaped portico. I have made an official request to the City of Hamilton that this be saved as well and used as a pavilion. It is a self-supporting, freestanding element that is in good condition and would need no maintenance. 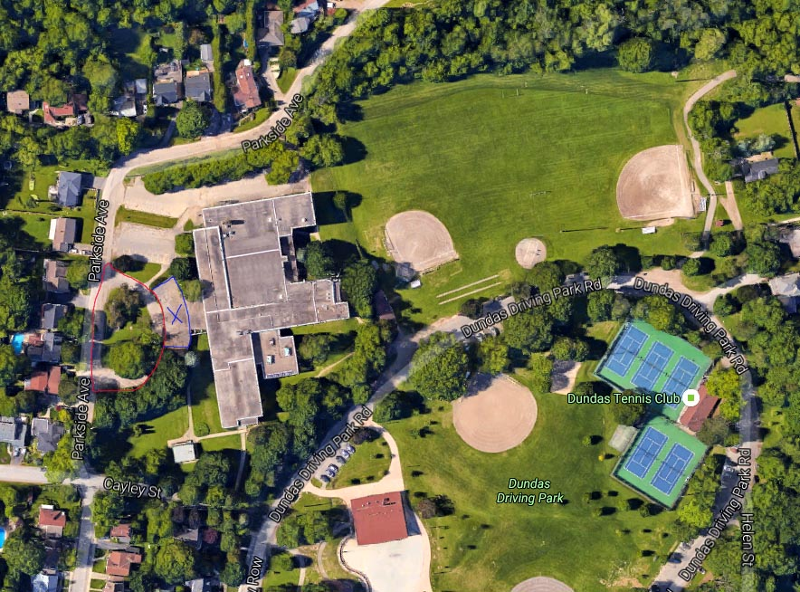 What I propose will cost the city nothing, as I have a volunteer, Dan Cheatley of 30 Forensic Engineering, who will provide engineering drawings with a structural stamp, and other volunteers who are qualified in the building trades who will assist in the demolition of the portico area.

The pavilion created by this portico will take up only 500 square feet, which is a fraction of the total space being used. (0.29 percent).

A small roofed area in an open space provides shelter during sudden weather events as well as adding an interesting visual element.

All throughout Europe, Roman arches and columns are part of gardens and belvederes, remains of medieval monasteries add a romantic touch to a tourist site, stone circles like Stonehenge and Avebury add mystery to your vacation. 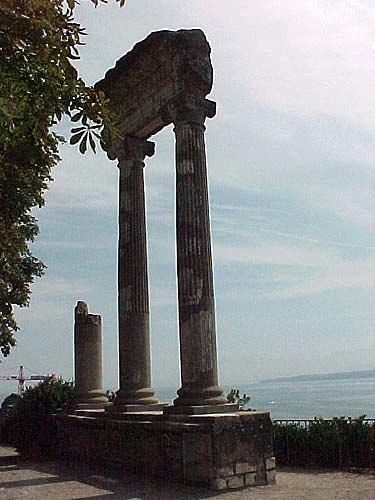 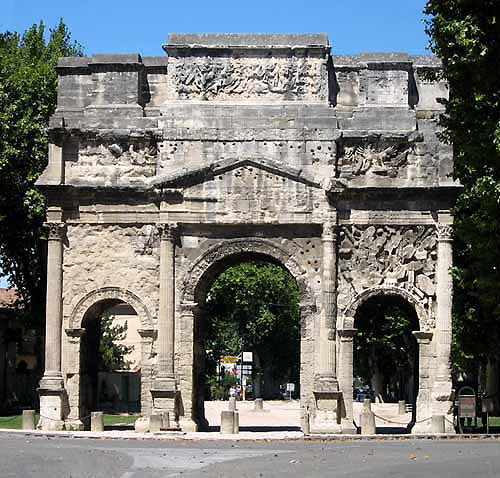 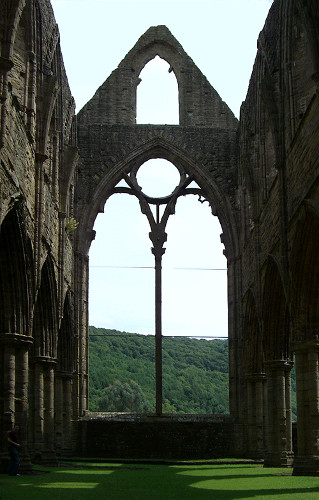 Hamilton seems compelled to destroy any cultural structure the way a pre-teen will take a hammer to glass just to see it burst.

That local schools are being torn down to build monster schools miles away is a crime. That SO MANY people are upset about their school being demolished should, at some point, start ringing some bells in the collective consciousness. What are we doing?

That Parkside is being torn down is frankly ridiculous. At least we may be able to save that magnificent front entrance as a shelter for future generations.

That local schools are being torn down to build monster schools miles away is a crime. That SO MANY people are upset about their school being demolished should, at some point, start ringing some bells in the collective consciousness. What are we doing?

We could be asking ourselves the same question from the 403 to Wentworth, Escarpment to Bay, in the near future ... an ARC process is about to start-up for our Jk to Grade 8 schools. I'm told closures will not be the main focus, but ...