Why is there a need for Cycling Advocacy Week? Because we can, and we must, do better.

Why do you ride? I ride for a variety of reasons - mental health, physical health, for fun, to save money, and because it's an easy and fun way to get around town.

At Cycle Hamilton, we've been asking this question for the last few days as a lead-up to Cycling Advocacy Week. 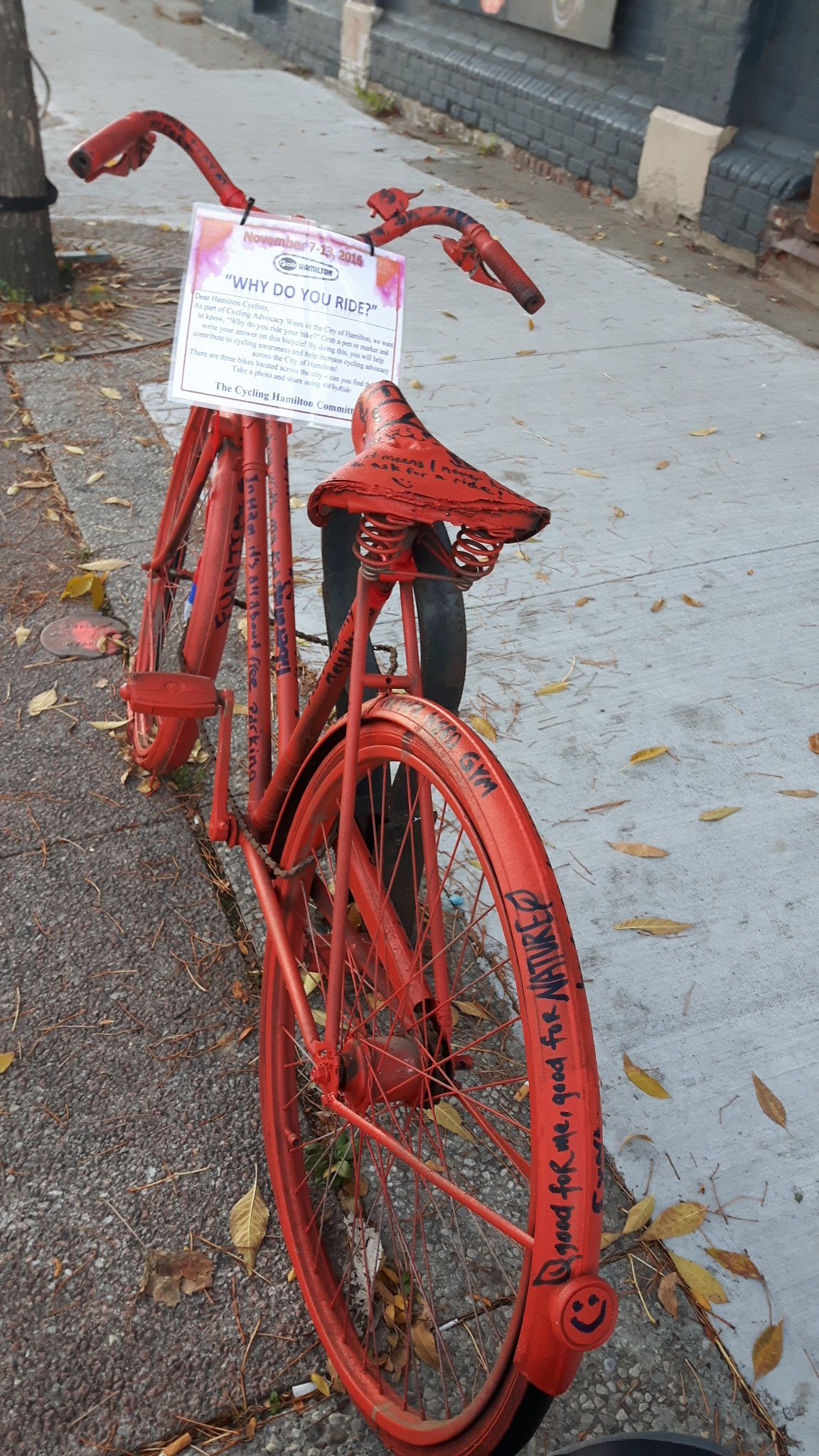 Perhaps you've seen the red bikes floating around town? With the Red Bike Project, led by our student partners from McMaster University's Sustainable Future Project, we've put the question of #whyride out there to the Hamilton community.

Whether answering the question directly on the red bikes (keep your eyes out for them and add your feedback when you spot one), or via the #whyride hashtag on social media, we've heard from many Hamiltonians across the city about their reasons for riding, including:

This is just a sample of the feedback we've received, but as this list shows, Hamiltonians have many answers to the question of #whyride.

These reasons, and many more, are why a number of cyclists and cycling organizations came together over the past few years to create a new organization - Cycle Hamilton - to build a strong community of friends, families, and organizations who want to work together for a healthy, safe, and sustainable cycling culture in Hamilton.

Starting Monday, November 7 and running until Saturday, November 12, Cycling Advocacy Week is our way of both celebrating the amazing cycling culture and infrastructure that we already have here in Hamilton, while also pushing us to consider how we can improve our cycling culture-as an organization, as a City, and as a community.

In terms of celebrating, there's much to celebrate these days and we are the first to acknowledge the incredible steps made in recent years, such as:

Despite all of the positive change happening in Hamilton, we can still do better-much, much better-than we are doing in terms of providing safe infrastructure, educating cyclists and drivers on what new lanes mean and how to share the road. Some examples of where we would like to see improvement include:

So, why a need for Cycling Advocacy Week? Because we can, and we must, do better.

We're hosting Cycling Advocacy Week not to point fingers, but to raise awareness and find some common ground so that Hamilton's cycling community, the City of Hamilton, and residents throughout the City can engage in a positive and constructive discussion about what it means to truly commit to creating a safe, healthy, and sustainable cycling culture.

We have an incredible foundation to build on and we hope that Cycling Advocacy Week will serve as another step in the right direction.

Cycling Advocacy Week is taking place from November 7-12. Join the event page on Facebook to stay up to date or scroll down for information on specific events: