Find Out if You Have a Radon Problem

Radon is responsible for 1,000 preventable deaths a year, even though the one-time cost of testing your house for radon is $30 or less.

November is Radon awareness month. This is a public service announcement, but it also raises a question: What the hell is going on here? 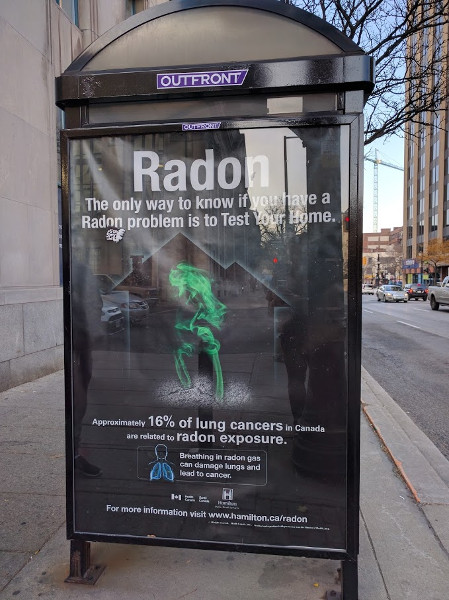 Radon is a naturally-occuring radioactive gas, a breakdown product of uranium, which is found in rock and soil everywhere. Since it is colourless and odourless, you cannot know if it's there without testing.

Radon breaks down further by releasing an alpha particle - a helium nucleus stripped of electrons. It is a low-energy particle, easily shielded by Earth's atmosphere, or your skin.

It is generally harmless. Except inside the lung.

When inhaled, radon decays and releases alpha particles in close contact with vulnerable lung tissue and blood cells. This causes DNA mutations. Given enough time and dosage, sometimes your immune system is not able to repair the damage and the mutation becomes lung cancer.

Radon can cause cancer by itself, but it acts synergistically (more than additively) with tobacco smoke, and theoretically, other types of air pollution as well.

Because what we know about radon is based on large-scale statistics, scientists can only detect obvious associations. New research suggests that blood cancers in women, who may have spent more time at home than men, may be related to elevated radon levels. It's entirely possible that radon contributes to other types of cancer in numbers so far too small to notice.

Radon is measured in units of Becquerels per cubic meter of air (Bq/m3). The risk is linear, in that each increment of 100 Bq/m3 results in a 16 percent increase in lung cancer risk.

The Canadian standard is below 200 Bq/m3. Other countries have different action levels, e.g. the US is 148 (being American, they use different units), and European countries range from 100 to 400. 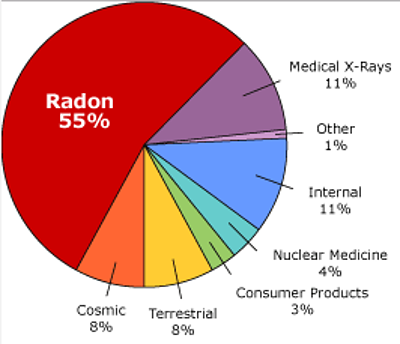 What does this mean in real life?

Here's a sample of approximate annual deaths in Canada by cause:

Think of the attention given to each of the above causes of death, and funding for research activity, prevention, and screening. One of these things is not like the others.

Health Canada apparently has an annual budget of less than half a million dollars for radon research and promotion. That is less than 1.5 cents per capita. You read that correctly.

The best bang for the buck in medical science is prevention. This includes things like a healthy diet, an active lifestyle, minimizing smoking, and driving sober.

Imagine if there was a simple prevention that reduced the rates of breast or prostate cancer by 1,000 people a year. Or cut traffic deaths by more than half. The press hype might break the Internet!

With radon, 1,000 of those 3,000 deaths could be entirely prevented by reducing radon levels in houses that test over 200 Bq/m3.

How to test for radon

The one-time cost of testing your house for radon is $30 or less. The most common method is to use an alpha track detector over a minimum 90 day period. There are several sources for these, but the most economical I've found is Accustar Canada.

Order in bulk and split the cost with your friends and neighbours. They make awesome nerdy Christmas presents.

If your reading is over 200 Bq/m3, have your house assessed, and they will likely install a fan that exhausts air containing a high concentration of radon from under the basement floor slab. The total cost is approximately $2,000, plus $50 a year in electricity.

A proposal from CELA suggests that a 15 percent tax credit for radon mitigation would possibly pay for itself just in increased income tax from contractors, not to mention the benefit to the economy, and not even counting the much reduced medical costs of not having to treat 1000 additional cancers a year.

In Canada, 1,000 cancer deaths is a large number, and I am stymied to come up with something within the same order of magnitude of mortality in relation to a pittance of research and awareness funding.

I've noticed that many things in medicine operate on the squeaky-wheel principle. Almost all people who get lung cancer are smokers, and they have a unique psychology in the cancer world: they don't ask "why me?". They know the answer: because they smoked and knew the risks, and for some reason quietly accept their fate. No squeaking.

Breast, prostate, and reproductive organ cancers get a lot of attention because, let's be honest - we're highly invested in gender identity and fear any related threats.

Or perhaps it's simply that the public and medical profession has so vilified smoking that lung cancer victims get little sympathy.

Disclosure: This fight is personal

As part of Health Canada's cross-country radon study of 2012, Hamilton had 100 households tested. Five of these came back with readings over 200 Bq/m3. The highest reading was just over 500.

So I was surprised to get a reading in my house of 850 last winter. That is higher than 99th percentile in the Hamilton area, if Health Canada's study is representative.

I was less surprised that my childhood home in northern Ontario read 450. After all, Canadian shield granite is more radioactive than limestone on average.

This is a spot of bad luck, twice. But I wonder if my children and I might carry some cancer susceptibility genes. This is how cancer works: genetics cocks the gun, and the environment pulls the trigger.

My father died of lung cancer at age 63, with no other medical problems, and a 20 pack year smoking history. That will mean something only to doctors, but it's on the low end of tobacco use. The last 33 years of his life were spent in the same northern Ontario home with elevated radon levels.

Because radon risk is entirely derived from statistical regression, we can only know that the numbers are valid on average. For any individual, it is impossible to determine cause and effect.

But I wonder. And I often miss him.

Others with similar stories are more sure of the cause and effect and have set up charities to help test for and mitigate radon.

Who is in charge?

I am trying to come up some other explanation for Canadian inaction on radon other than that there is no one with a brain or a spine in charge of public health.

Ontario proposed but did not pass a bill to create a radon registry, which was toothless anyway.

Politicians might balk at the cost of testing. If Canada has ten million dwellings untested for radon, at $20 per dwelling using current private bulk test pricing that's $200 million. Nationalizing radon testing, with economy of scale it could likely be done for $100 million.

Lawyers have raised concerns about real estate transactions and liability.

But physicians, especially those in public health, have no excuses for failing to unite and push this issue.

What can you do?

Call up your MP, but it shouldn't be necessary. Action on this file should be science-based and the science is so convincing that it makes its own case. If something so obvious needs a political champion, Canada's future is in serious trouble.

Please, get a few neighbours together to reduce the cost, and get a radon test done this winter. You'll sleep better next year.

For about $700 for a fan, PVC pipes and a real time radon detector, my house's summer radon levels have come down from about 400 to 30 Bq/m3 with a fan that draws 25 W, which should cost about $30 annually.