At best, this proposal destroys a set of rare pre-Confederation stone buildings to make way for something new. At worst, it risks creating another void space downtown in a strategically important street wall.

A version of this was sent to Ward 2 Councillor Jason Farr and City Council in advance of the Tuesday, January 17, 2017 Planning Committee meeting. If you care about heritage in Hamilton, please consider writing a letter to Council and/or making a delegation to the meeting.

I realize I've missed the cut-off for this to be included in the agenda for the January 17, 2017 Planning Committee meeting, but I'd still like to convey my support for the work that Ned Nolan and the Friends of the Gore are doing to oppose the demolition of 24-28 King Street East and partial demolition of 18-22 King Street East. 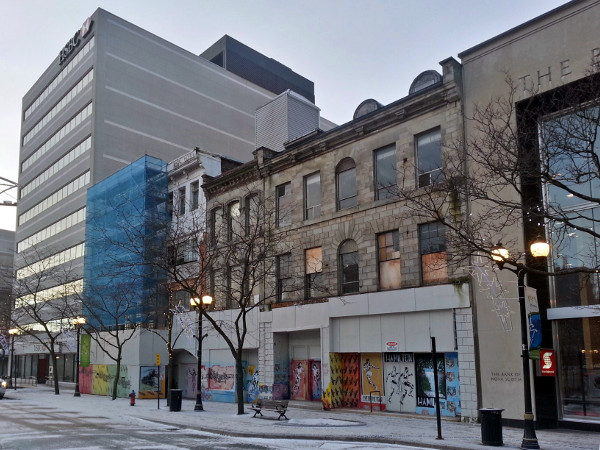 I certainly don't want to see unnecessary obstacles placed in the way of investment that renews our downtown core and understand not every structure is worth saving.

But I fear that if we don't preserve our built heritage wherever possible and encourage development pressure to restore and/or retrofit existing buildings and generate infill on vacant lots and surface parking we'll be missing an opportunity to create real, lasting value out of our current building boom.

Vibrant and resilient urban cores have a diverse mix of buildings in terms of age, size, materials, and architectural style. This is a competitive advantage and why people like me choose to live with our families in Ward 2.

Simply put: we value the sense of place and character that old buildings contribute to city life. I look to the City to protect and enhance that in the public interest and for future Hamiltonians.

Not that long ago, there were still businesses operating at ground-level out of the buildings in question.

It was most unfortunate that the property owner chose to evict them and reduce the vibrancy of the Gore to advance their interests, especially given the investment the City has made in public realm improvement in front of their buildings.

At best, this proposal destroys a set of rare pre-Confederation stone buildings to make way for something new. At worst, this proposal risks creating another void space downtown, this time in a strategically important street wall.

Real estate development is cyclical. We need to be mindful of that. What comes down may not go back up, at least not quickly, if market conditions change and credit tightens.

I'm a big believer in Hamilton's prospects, but I don't think Hamilton can afford to take the risk, and it shouldn't have to - especially not when adaptive reuse in this case has not been shown to be impractical, technically or financially, and is more desirable in my view.

It's also in keeping with our Official Plan, as the Friends of the Gore pointed out in a statement made to the Hamilton Municipal Heritage Committee in December.

I appreciate your work and look forward to hearing what you have to say about this important matter at Planning Committee on Tuesday.

Councillor Partridge (who is on MHC and Planning) reiterated that Hamilton has 5 downtowns and voted to demolish.