Some cities have implemented centre-aligned bike lanes. Here is how that might work on York between Hess and Dundurn.

The City of Hamilton has told us that the York and Dundurn bike lanes may need to be removed as York and Dundurn must carry westbound automotive traffic that will no longer fit on LRT-equipped King Street. Since everyone else has thrown a design out there for saving the York bike track, I thought I'd do the same.

There are a handful of cities that have implemented centre-aligned bike lanes. There are some advantages to this flow: Drivers expect to see oncoming traffic on the left. In one-way traffic like Cannon, this means putting the cycle track on the left side (south for Cannon).

In a two-way street, this means using the centre - it's on the left for both directions of traffic. This allows us to unify the two bike lanes into a single protected bidirectional cycle track without having oncoming traffic on the right.

Also, a feature very particular to York and Cannon; Cannon merges with York Boulevard at Queen to form a single road. The Cannon lanes, if continued, would end in the centre of this road.

So let's see what that looks like: The Cannon lanes continue right to Queen, and only have to deal with left-turning traffic turning across the bike lane. 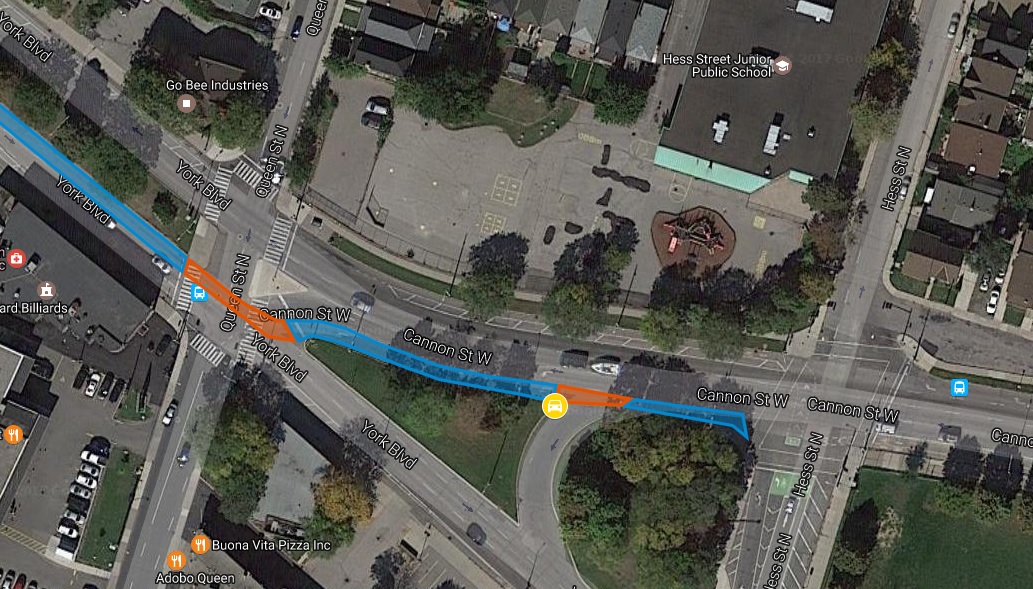 No need to cross York or Cannon to continue on the track. Since the left-turn signals are already in a separate phase, that means no unexpected interactions between the bike lane and drivers for straight-through cyclists. Of course, a "yield to bikes" sign is needed for the uncontrolled left-turn at the U-Turn slip road from Cannon to eastbound York.

York also offers a particular advantage that its massive tree-lined grassy median will provide a refuge for cyclists; a bit of greenery and safe space in a ride that's otherwise a bit intense.

This isn't some zany invention. Other cities have noticed the merits of a bike track in the middle of a bi-directional road - all the cyclists are in one place, and oncoming traffic is on the left. Contrast that to two side-aligned bike lanes (one in each direction) which suffer conflicts with parking and space issues. Alternately, a bi-directional cycle track on the side of the road means oncoming traffic in a very unexpected place.

Of course, there are drawbacks too - it makes turning for cyclists much more difficult. Every turn requires crossing the car lanes, possibly with a bike box. And it only works if drivers can only go left at an explicit left-turn-signal, or else left-turns are going across a bike lane, which in the case of York could be very unexpected since the "left hook" zone would be very hard for a westbound driver to see.

Other cities with centre-aligned bike lanes

Look at that jerk blocking the bike lane with his big limo. 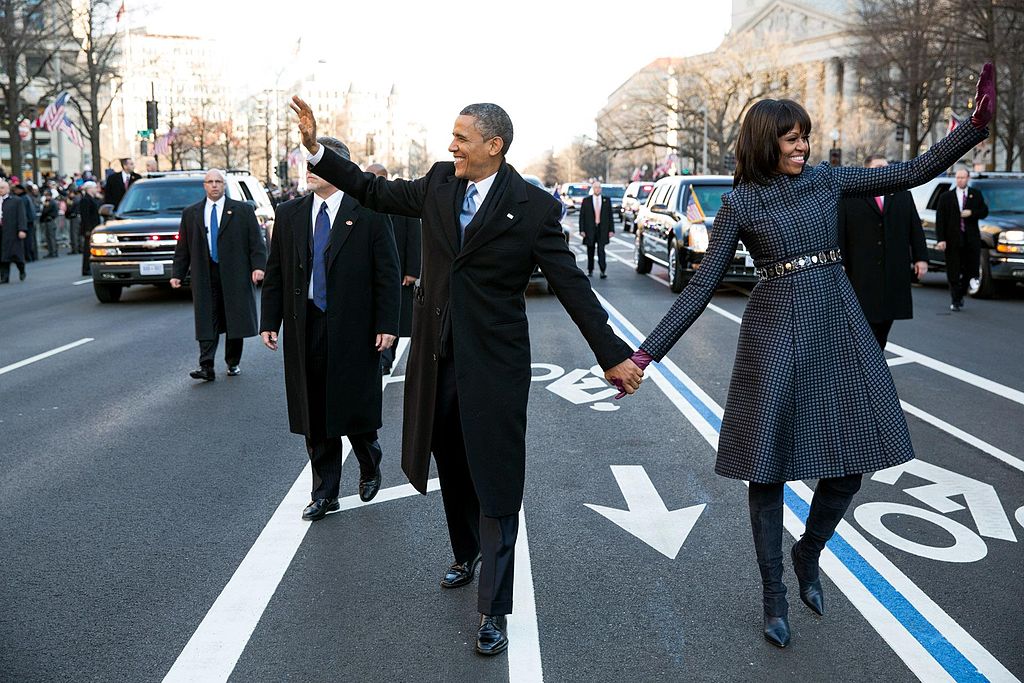 Because of the need for parades on Pennsylvania, they can't put proper protections on their bike lane. York Boulevard is a lot of things, but not a parade route. So we don't have that limitation.

Looking closer, most of the intersections on Pennsylvania advise turning cyclists just to cross in crosswalks - topologically this is practically identical to a bike box, but lets the city focus on their nice, presentable concrete crossings. Where no concrete exists, a slightly-unorthodox bike box is present.

Another city with centre bike lanes is NYC. Brooklyn sports a centre-aligned track on Sands St, leading to the bikeway on the Manhattan Bridge. 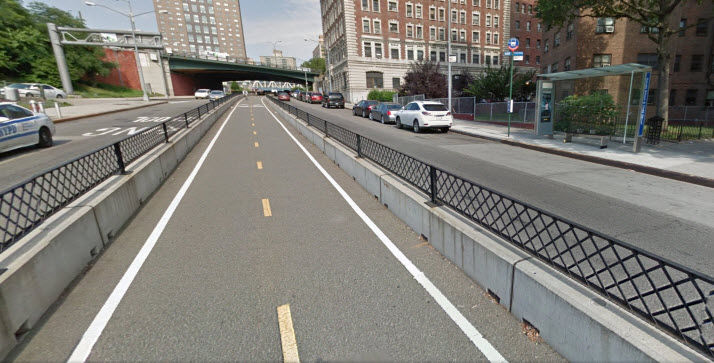 The ability to protect these centre bikeways shines here. Again we see some use of bike boxes for turning movements. 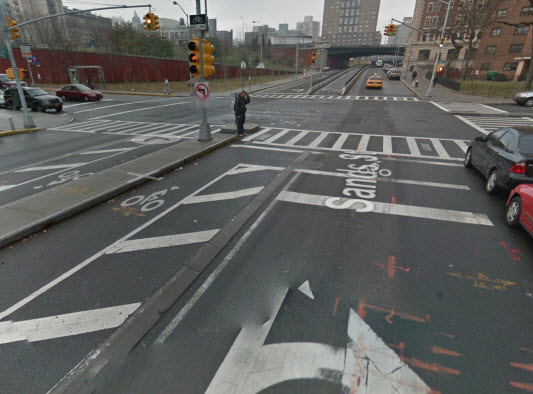 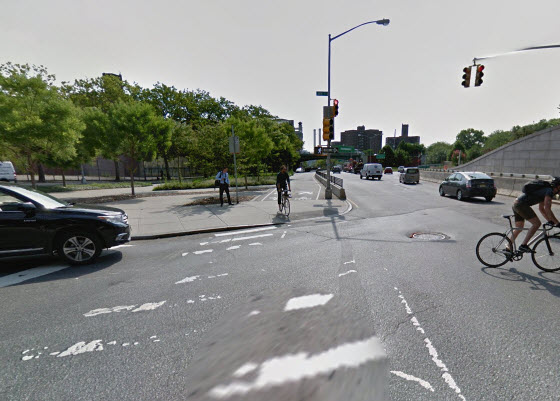 There are some challenges to York. Without tearing out all the concrete and some traffic signals, the route will be slightly awkward at intersections. We'll be re-purposing the eastbound left-turn lanes, which are curved for left turns and so diverge somewhat from the straight path. 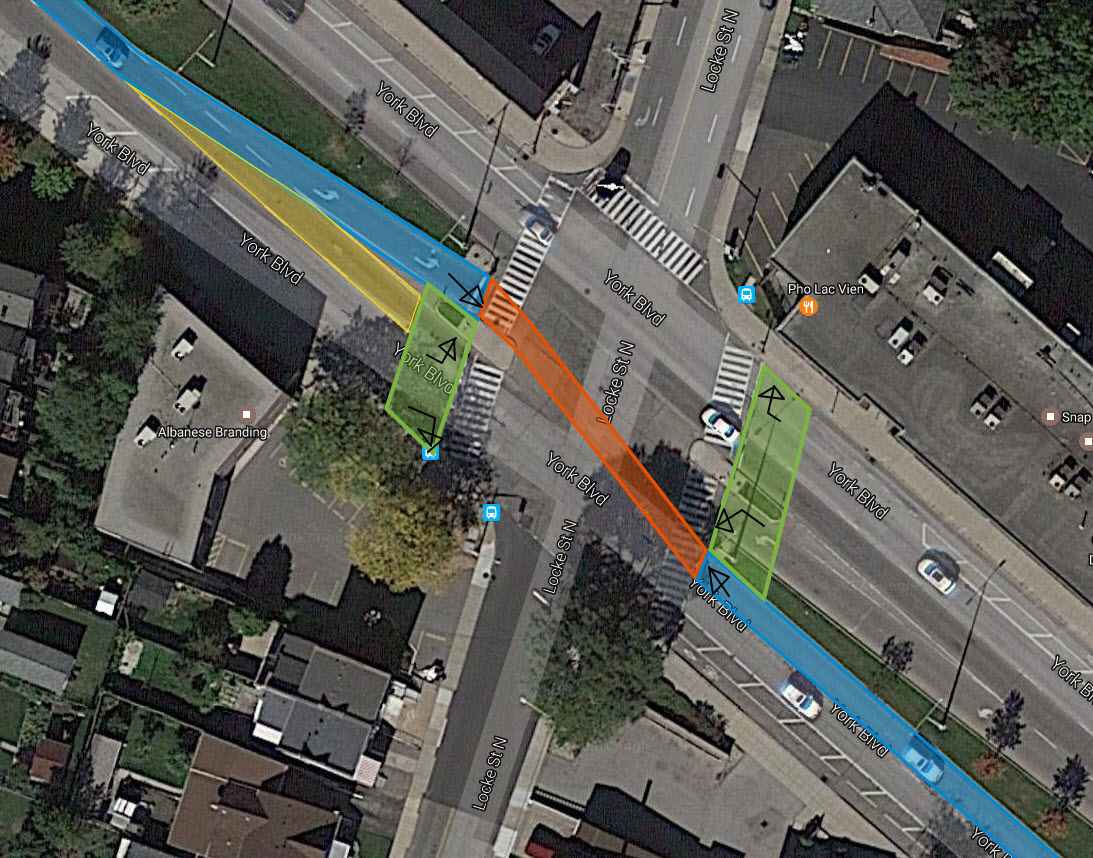 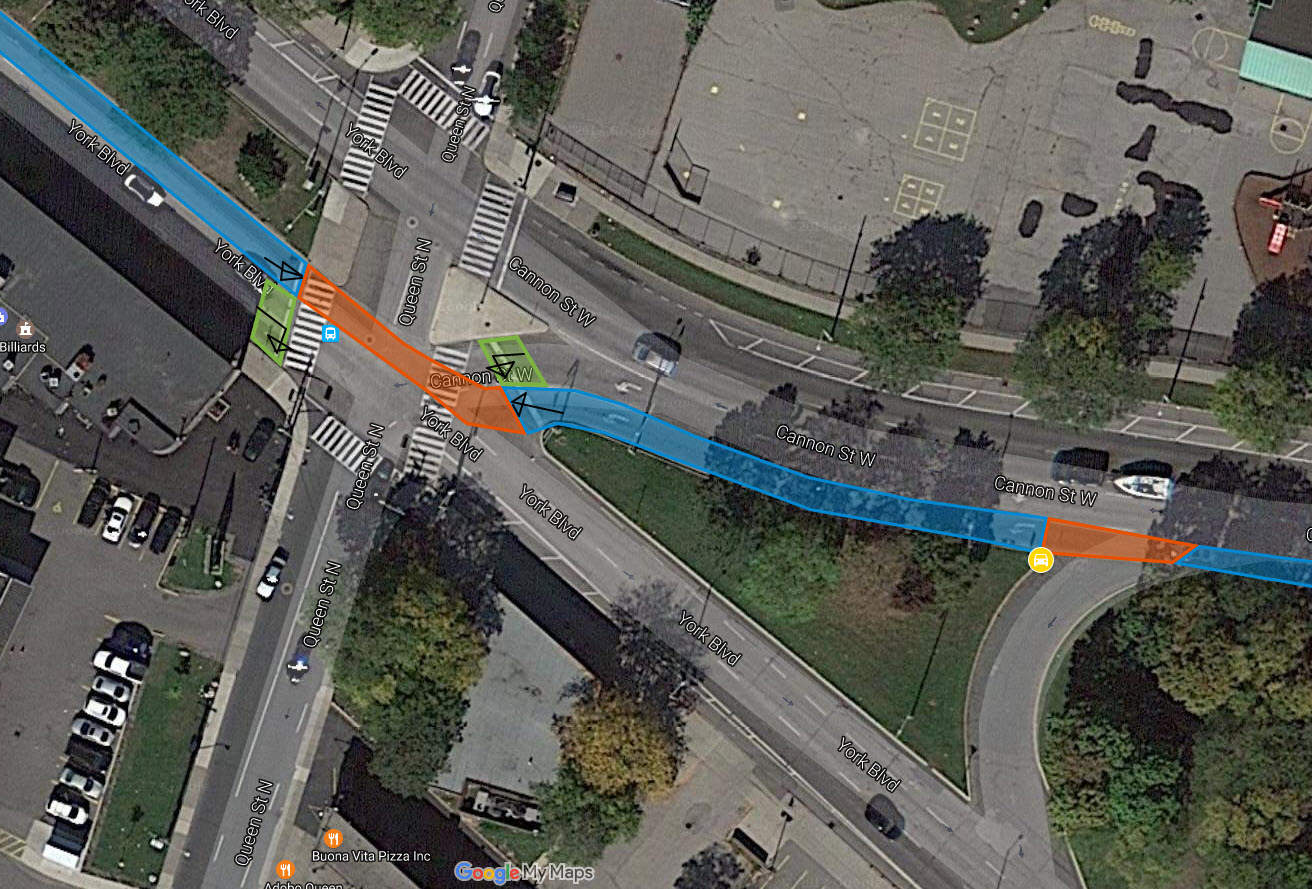 Another challenge is the unprotected left turn lanes that exist for minor intersections - one for Rolph's Gate, one for Oxford, and one for the Cannon - York U-turn.

Ultimately, there's no good solution for those besides the same "yield to cyclists" sign we already see for left turns along the Cannon track. The City used a more unorthodox structure on King and Paradise in Westdale which is a part of my regular commute, and it seems to cause nothing but confusion. 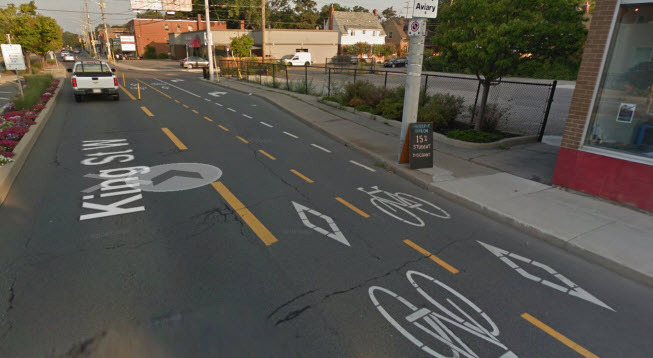 So we'll be consistent - on the eastbound side of York, the leftmost lane and the turn-lanes are now the cycle track, where a turn lane is present, we'll use the now-available next lane as the turn lane. So the experience should be nearly unchanged for eastbound drivers, they're just turning from a new turning lane. 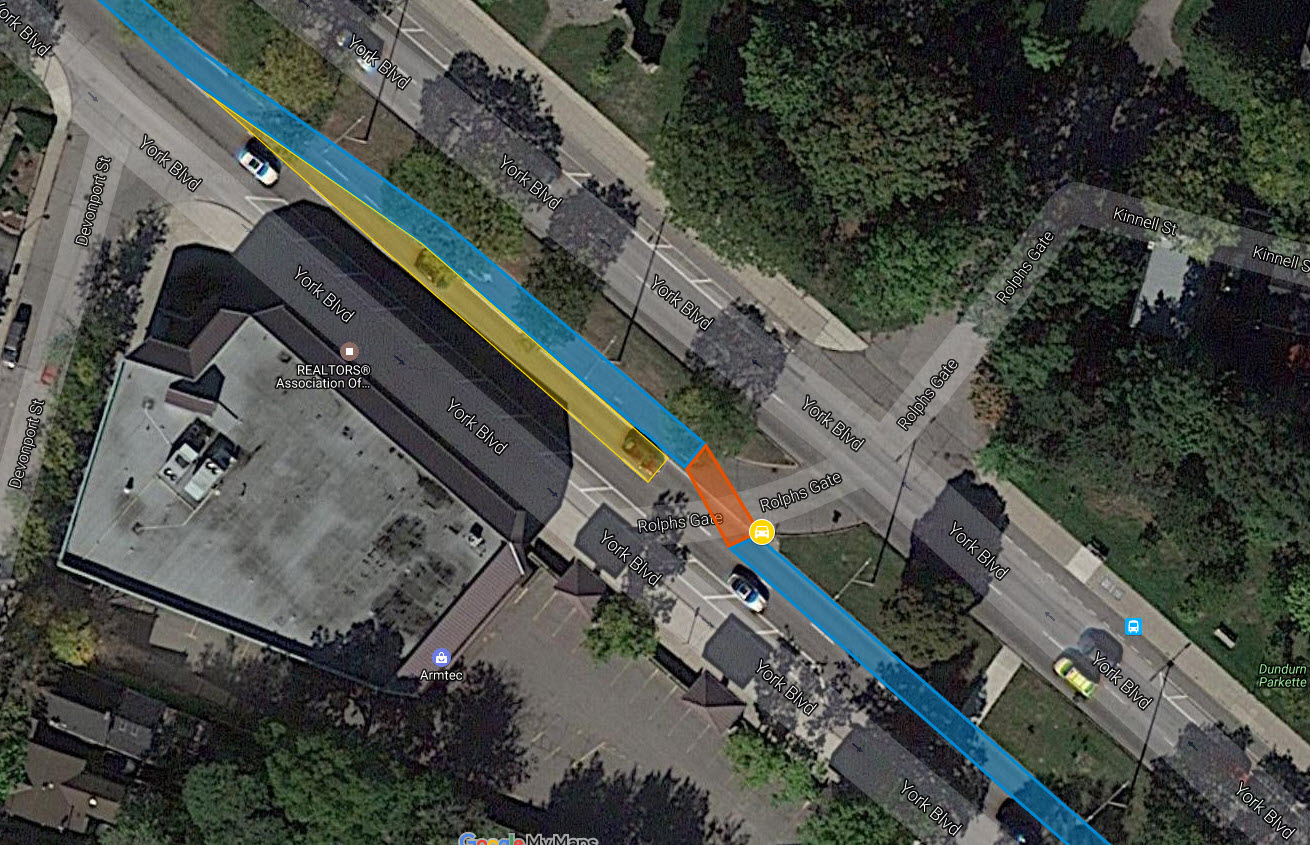 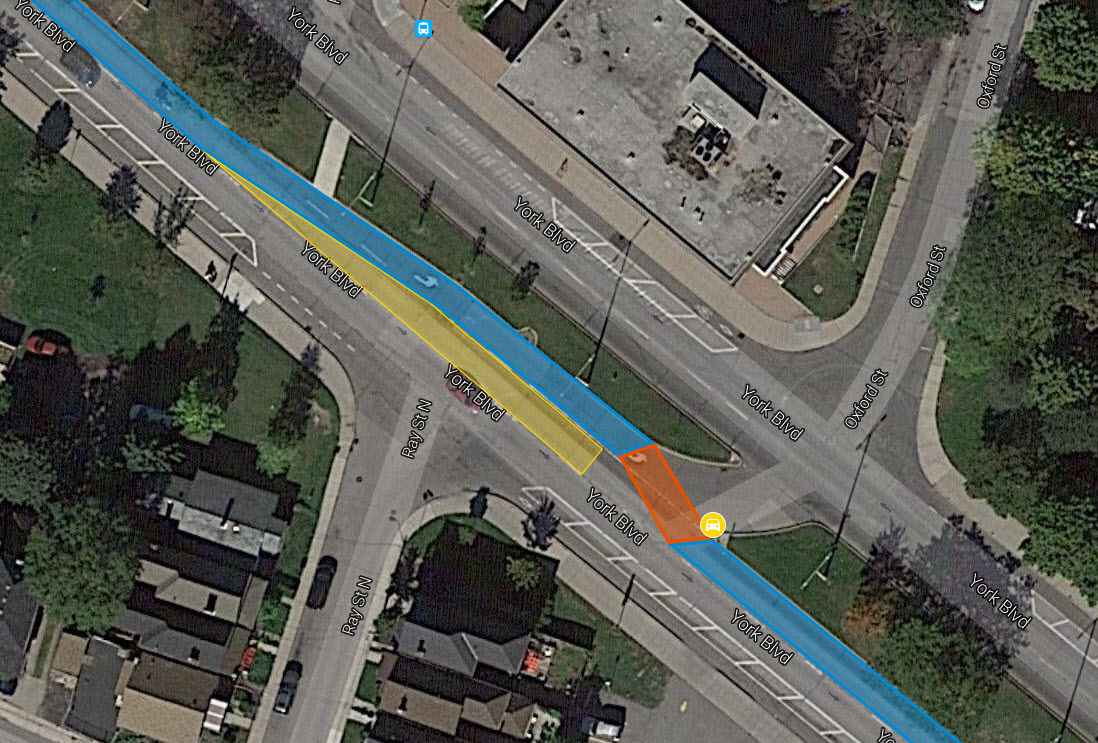 Places for overhanging "Yield to cyclists" signs are marked with a yellow car symbol.

Sadly, some concrete will need to be reworked - to allow cyclists to turn, we need bike boxes at Queen, Dundurn, and Locke... but there's a concrete and grass median in the way. Adding ramps or flattening it is the best option, since the crosswalks aren't wide enough to work as half-cross-walks, half-bike-boxes.

Bike boxes are never ideal, since it means the cyclist has to wait for a full cycle to turn. In this case, both left turns and right turns require a full cycle, cyclists even have to turn right to get into the leftwards bike box.

Also, accessing minor roads will obviously invite cyclists to dart across traffic. Being able to turn only at Locke and Queen isn't anybody's favourite option.

Particularly since York's median has lowered concrete ramps for pedestrians at minor intersections, cyclists will obviously feel invited to use those. There's no good answer besides "wait for your gap". Side-aligned bike lanes do not have this problem for right turns, but they double it for left ones.

The full map is available at my maps. 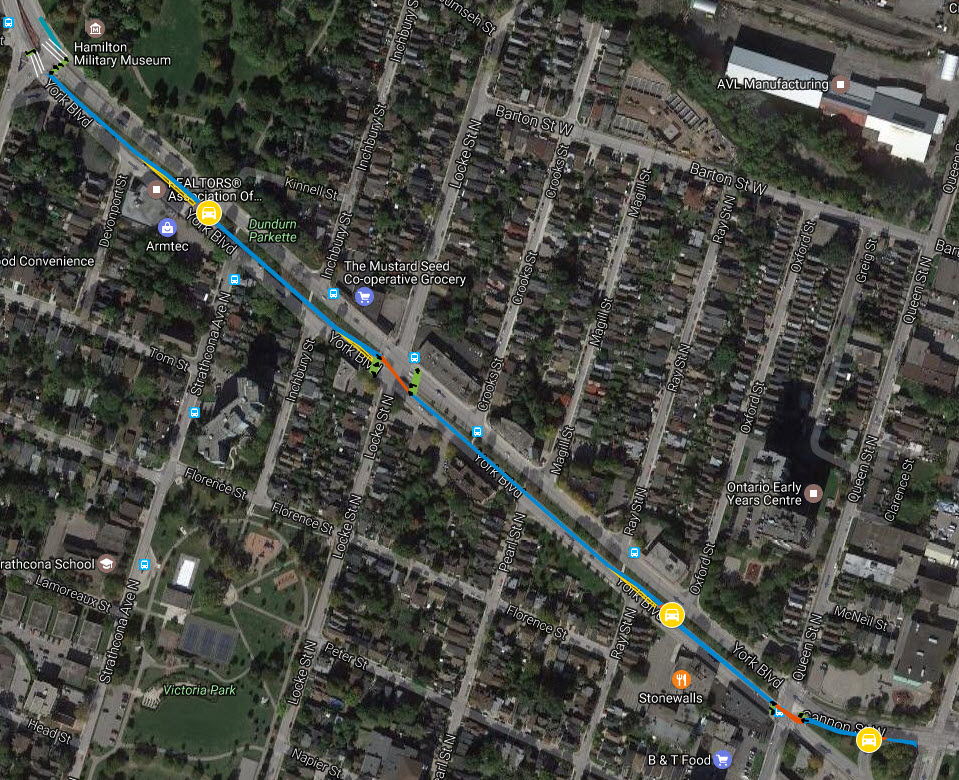 Maps and streetview images from Google Maps and are © Google, 2017.

This article was first published on Martin Zarate's personal website.

Martin Zarate is a software developer who lives in Westdale with his wife and three children.

Just because there's been a bit of confusion:

It's not in the grassy median. It's in the currently-eastbound lane next to the median. The median is exactly the same. The little pedestrian refuges on the median are the same.