Every logo represents taxes, rents, employment, salaries and civic contribution by leaders and owners who felt it important enough to demonstrate their support for LRT.

As you continue to discuss Hamilton's LRT project, I want to be sure that the LogoMotion poster is added to the official record. 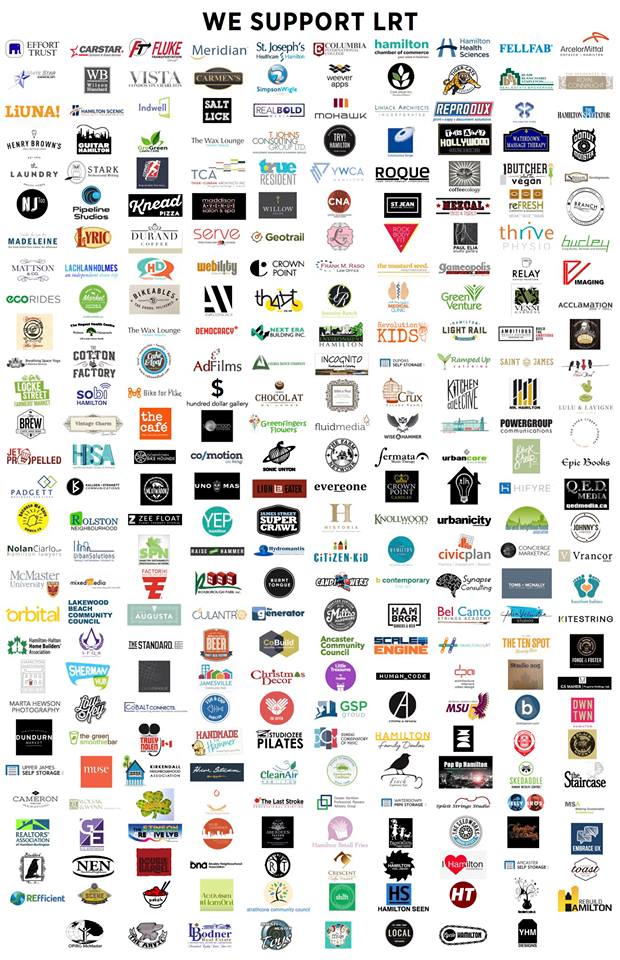 As some of you know, the poster was started by a one engaged resident, me, and was received with enthusiasm by nearly 300 organizations and businesses throughout the City of Hamilton who wished to lend their support to the LRT project.

Using social media to get the word out, organizations and businesses whose logos appear on the poster reached out to me and sent images of their logos. The compilation is, in my view, impressive for such an organic and grassroots initiative.

As you are well aware, every logo represents taxes, rents, employment, salaries and civic contribution by leaders and owners who felt it important enough to demonstrate their support for LRT.

Some might say that a logo does not necessarily represent the voices of all employees, which is true. But I assure you that in every case, the owners and the leaders of these organizations included on the poster made the formal decision to actively support LRT, such is their belief in the future of our City.

I hope that you will do the same.

Hamilton's LRT plan is under serious threat. Please show your LRT support at the March 28, 2017 General Issues Committee meeting and urge Council not to ruin this once-in-a-generation opportunity.

Do your support LRT from Mcmaster to Queenston Rd. or the #1 priority of the Rapid Ready plan Eastgate Square to McMaster as Mayor Fred's conversation with Wynne Jan. 2015 full Funding for LRT McMaster to Eastgate Square ??

Whether a Queenston circle or Eastgate end point is best is not the question to be asking at this point. The province has committed to getting us at least part way to where we want to be. The BLAST plan hasn’t been changed, just the scope of Stage 1. Why has this become all or nothing?

As I don't live in your city, I find it increasingly disturbing that every vote you guys have about LRT becomes a do or die situation. That's not a great environment for a project like this to have to keep enduring. Is your city council's support for the B-Line LRT project, really that low? I would have thought that after Waterloo's Ion LRT project received its first LRV, things would start to calm down in Hamilton and normalize. Seeing what the community down the way has ready to go, so to speak. There seems to be ample evidence that, many if not all of your community's serious business groups, economic organizations as well as academics eagerly support LRT. Yet, those facts haven't translated to unanimous city council support. I find that quite troubling. Further more, the opposition doesn't seem to have any real suggestions and ideas about an alternative to LRT, other than vague BRT lite, express busses paid for with what money, I have no idea. Only time will tell, I guess.

career politicians in Hamilton often are the cities biggest opponents. The term 'Hamilton-haters' has been synonymous with many of them over the decades. As long as their bank accounts keep getting filled with public money, they don't care about anything else.

Who knows what the majority of the citizens of Hamilton think or want. We will probably never know.

Or we may know sooner than you think: http://www.thespec.com/news-story/7202012-hamilton-councillors-teaming-up-to-poll-residents-on-lrt/

That's true. And really what you need is for citizens to be knowledgeable about the issue, so they can come to an informed decision. And that takes a lot of time and outreach. When I went around presenting to many different community groups in 2008-2009 every single one eventually decided to endorse LRT.

However, we do know that the leaders of the 10 anchor institutions strongly support LRT, and together they represent about 75,000 jobs and well over a 100,000 students. That is significant, since it shows they are convinced that this project would be beneficial to a pretty big chunk of Hamilton's population.

See, this is the problem. If you can't explain the need in a 30 second elevator pitch then odds are we don't need it. I haven't yet heard the convincing argument for LRT and I don't drive. I'm a cyclist and a pedestrian and a transit user and I'm waiting to hear the reasoning behind the LRT. It's one route. Correction: one line on one route. For a billion dollars. On rails. With no information on who will run and operate it. And why? I commute daily to McMaster and have never experienced an issue. Yes, I've seen a flyby. Guess what? Next bus is 5 minutes behind. Sometimes less. And buses accommodate bike lanes. The LRT will remove bike lanes. Seems pretty straightforward to me. The proposed plan isn't worth a billion dollars. It just isn't. Especially with HSR ridership DOWN. It doesn't solve a problem that's worth a billion dollars. And that's just the initial outlay of capital. Again, no mention of what the ongoing expenses will be or who will foot that bill. Let me put it in a simpler way: if we *really* *needed* a rail line there wouldn't be this much discussion or debate. People would be screaming for it. Instead they're screaming for repairs to existing infrastructure. Fixing our sewers isn't sexy and shiny like a train but people seem to understand that we need it done. And don't give me the "LRT will fix the sewers too." It won't. It'll only help replace those sewers directly on the route. The backlog for Hamilton's sewer repairs is $3.3 billion dollars on its own. Finally, no one trusts the Wynne government or Metrolinx. The whole thing is rotten and corrupt from top to tail. All this talk of 3Ps is also troubling. Story from 2015 saying our backlog is over $3 billion: http://www.thespec.com/news-story/5518058-hamilton-the-unaffordable-city/

so, because this project will only see the provincial taxpayer replace all the sewers along King Street, but not ALL sewers city-wide, we should turn down the offer.
Got it.