Chris Dunn and a group of local volunteers take matters into their own hands to clean up Highland Gardens Park (The Rez).

What sort of person drags a huge dumpster in front of his house and enlists his wife, dozens of friends, neighbours and strangers to pick up litter in a City park and along a portion of the Bruce Trail? Moreover, what motivates someone to take on this daunting environmental task not once, but twice a year?

Chris Dunn poses for the camera with fellow volunteers.

To illustrate the 'Power of One' (in action) you could find no better example that the organizational drive and commitment of my neighbour up the street in Kirkendall Neighbourhood, southwest southwest Hamilton near Locke St. and Aberdeen Ave.

To find out, I volunteered to help out on a sunny Saturday late this past April and spoke with retired teacher/principal, clean up founder and 'local hero' (my moniker for him) Chris Dunn.

Grant Ranalli (GR): Chris, how did you get the idea to start this project and how long has it been going on?

Chris Dunn (CD): The Rez [Highland Gardens Park at the top of Mountain Ave., which sits atop an underground reservoir - Ed.] used to have its own groundskeeper, but Peter was not replaced when he retired. Budget cuts, wear and tear, vandalism, etc., soon took its toll.

When I retired 12 years ago, I decided to do something about improving our park. I organized a meeting of all park users and adjoining neighbours, along with Park and City officials and politicians. Everybody was able to catalog their concerns and as a result we did get some improvements, such as a new railing for the park steps, more garbage cans, drainage repairs, and some dead tree removal, etc.

However, it was obvious that if we wanted a cleaner, safer park and trails, we had to do it ourselves. 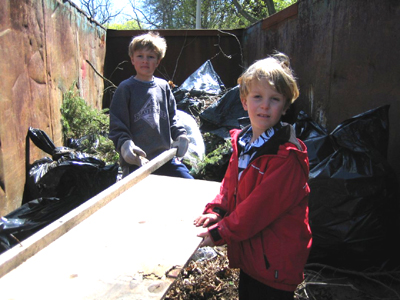 Young volunteers help drag a board into the dumpster.

GR: Surely you did not start with a few green garbage bags? Now you have your own huge dumpster and other merials. How did that happen?

GR: Who helps out your cleanup?

CD: With the odd exception, the most consistent volunteers have come from those people who live close to the Reservoir Park and/or use the Park and Bruce Trails. The number of volunteers has remained between 50 to 75 over the years, but about half the group changes each cleanup. It is nice to see so many young families getting involved, but disappointing to see that dog walkers are under-represented during cleanup days! 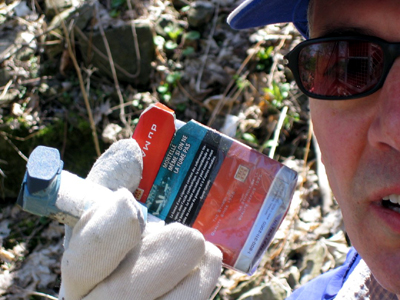 A visual metaphor? Grant Ranalli finds a cigarette package and an inhaler discarded at the park.

GR: In your opinion, why do people litter?

CD: Why do people litter? I like the sign, "Pick it up, yourself; I am not your mother!" Lazy, inconsiderate people, with no fear of reprisals, tend to litter, in my opinion.

GR: How long will you keep the project going? Will you be carried out in a dumpster yourself some day?

CD: In today's world if you want something done you had better do it yourself. Therefore, I will continue my cleanup each spring and fall as long as I am physically able. Let's hope that someone else will want to continue this project after me!

GR: What has surprised or impressed you?

GR: What are your concerns for the future?

CD: My major concern is escalating vandalism. No longer just graffiti and tagging, but fires set deliberately in the park and trails. 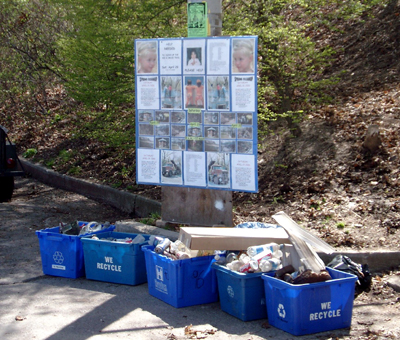 Five bins' worth of refuse finally make it to the recycling bin.

So ended our chat. I have been volunteering myself for at least a half dozen years. I am most grateful for the project since I am a Bruce Trail captain responsible for a very busy section of trail starting at the top of the James Mountain Road (aka the West Fifth access), and continuing eastward all the way past the reservoir (formally known a Highland Garden Park) to the Chedoke Golf Course clubhouse.

I make sure the trail blazes are in good condition, remove any 'windfall' tree limbs and cut back overgrowth in late spring. Although there is not much litter on my section of the trail, nevertheless, it is nice to know that others are looking out for problems as well. We all need to do our part where and when we can.

I am a teacher in a Catholic Elementary School, and we teach about the environment in terms of 'stewardship' of God's creation in that we are duty-bound to take good care of what has been given to us. Hence, I take my students out to pick litter on various occasions in the north-end neighbourhood where our school is located.

However, even if you are not religious I still have good reasons for you to volunteer for these kinds of projects. If you do not believe in the afterlife then you are even more obligated to take care of the Earth because, according to your beliefs, it may be the only one you've got!

Grant Ranalli lives in Hamilton and works as an elementary school teacher.

It's great to see community spirit alive and well! We all know the importance of keeping our world clean...most of us teach our children this from an early age. It would be great if these type of neighbourhood cleanups where advertised through the local media...it would bring much needed attention to an important matter and would likely pay off with more volunteers...many hands make light work! Congratulations on a job well done.