After a long and strict adherence to script, Wisterium Music is going off on unpredictable, lovely, flowering musical tangents and offshoots.

To be beautiful, musicianship requires perfection. Magician, Nick Wallace, said his proficiency for sleight-of-hand tricks comes from years of training on the violin, where miniscule inaccuracies in time or placement are loud and clear.

Perfection, of course, requires hours and hours and years of training. Adding to the burden, classical musicians must adhere to centuries of high expectations and virtuoso performances, to which they're compared. Classical musicians are often tightly wound. 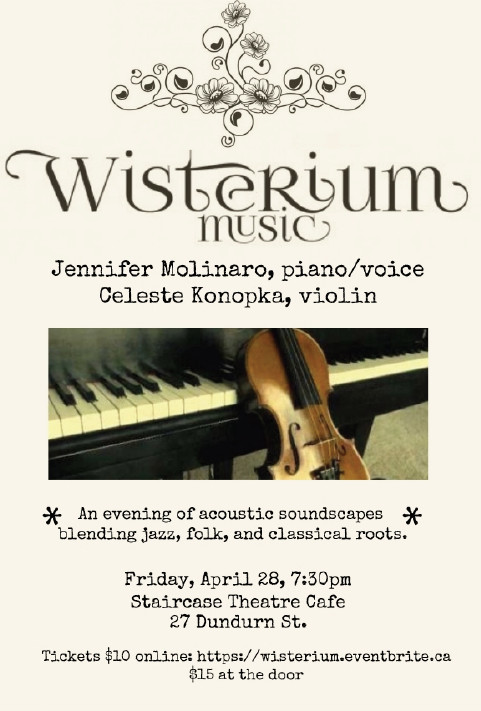 Celeste and Jennifer met at Western University in the 1990s, where they studied music. "We knew each other, but we weren't friends," said Jen, explaining their relationship.

They communicate thusly when they play music together. Celeste and Jen got together two years ago, "To have fun." Celeste said, "I asked Jen, 'Do you want to play something other than classical?'" They decided to improvise. "The first time, a lot came out." They've been playing together ever since, just for fun.

"It was natural," said Jen. "We felt usually connected. It's musical telepathy. After our first jam session, Celeste did a happy dance."

Jen is trained as a pianist and opera singer. Celeste started piano at four and violin at five. Since university, both women have stayed heavily involved in music; playing and teaching. Jen has been cutting loose with Jazz. "I taught myself to play Jazz piano," she said. "I love to sing Jazz. I'm obsessed with it."

Similarly, Celeste has been applying her musical skills to playing Folk, another genre which lends itself to improvising. She also performs a lot of beautiful, simple, simply beautiful children's songs. Celeste said they're grateful for their training because: "We have the technical tools to play other ways."

Englishman Walter Pater wrote, "All art constantly aspires to the condition of music." Done properly, music, like the love of a child or pet, can touch soft, vulnerable places. Music makes you feel. Music is therapeutic. Music, undoubtedly, was an original creative outlet.

While a cave-artist was painting on the cave walls, a cave-father was sitting around a fire, enjoying an inebriant with his cave-buddies, grunting and clapping rocks rhythmically, while his cave-wife was murmuring prehistoric lullabies to their cave-baby (and questioning her relationship to the caveman).

People have been playing, appropriating, blending, borrowing, inventing, marrying, melding, merging, mirroring, mixing, and (musically) evolving, ever since. Music is in our DNA.

Wisterium is a lovely microcosm of the mystical, mythical, magical musical journey.

I met up with the ladies at Jen's house, in the west end. "When we get together, we don't talk," said Celeste.

"We just play," said Jen. When it comes to fun, they're all business. After a quick chat, we went to her music room. Jen sat at the piano, Celeste picked up her violin and, without a word, off they went. A wave of beautiful sound crashed through the room and moved me. When they stopped, I asked, "Did you just make that up?"

In unison, they laughed and said, "Yes."

Jen said, "It's like we're talking. I can feel her pulling us into the next chord and I go with it."

Celeste continued, "There's no ego. That's why it's so fun. We take turns leading and following." Of their improvised moments, she said, "Sometimes, we'll spontaneously play something and, when we stop, we'll try to remember and recreate it because we loved the music, we'd just created."

They played Summer Time next. Jen said it's her favourite jazz standard and I could hear why. Jen has a rich, lush voice and Celeste plays off it perfectly with her violin. It was like a duet. As it was meant to be, their version of the song was perfectly haunting.

I've always loved Elvis and I Can't Help Falling In Love is my favourite Elvis song. They played that next. It was worthy of The King.

Wisterium is an apt name for the duet. Several years ago, I went to a garden center and asked for a vine to grow over our pergola, which covers the deck. The fine, young gentleman sold me a wisteria.

If you stick a wisteria vine in the ground and ignore it, it will be unwieldy, undisciplined, and unattractive. However, a well-trained, persistently pruned wisteria is a magnificent, twisting, hearty vine, which blooms spectacularly and covers the deck like a jungle canopy: perfect. You have to work and wait years for its beautifying effects, though.

Likewise, a child with a musical instrument must be persistently trained and encouraged, for years, to follow the desired course to beauty. Then, Wisterium Music happens.

A trained, mature wisteria vine, left on its own, maintains its well-earned splendor, while producing unpredictable, lovely, flowering tangents and offshoots. The wisteria is a beautiful vine.

As Jen said of their classical training, "You play what's on the page." After a long and strict adherence to script, Wisterium Music is going off on unpredictable, lovely, flowering musical tangents and offshoots. Wisterium make beautiful music.

I didn't know when I planted it, but the wisteria vine is an invasive species, slowly taking over. Their first gig is coming up and Wisterium Music is apt to do likewise. The irony is symphonic.

Celeste said, "We'll be playing some international folk arrangements, popular covers, original compositions, and improvised soundscapes. There may also be a surprise or two."

Wisterium Music is playing Friday, April 28, at 7:30, at The Staircase Theatre, a terrific venue. It's going to be great.