A Proposal for Local GO Train Service East of Hunter

A proposal to use the old TH&B line to provide local transit service, similar to Toronto's SmartTrack, between Hunter Station and Centennial Parkway.

My recent article on restoring the Hunter GO Station's pedestrian plaza resulted in some discussion in the article's comments about extending GO service to the east of the existing Hunter Street station.

This is not the first time that this has been discussed. One example is in the proposal for a Hamilton regional rail network on the excellent Hamilton Transit History site.

However, what this article proposes is that the GO service be extended to provide local, not regional service, east of the Hunter Street GO Station. 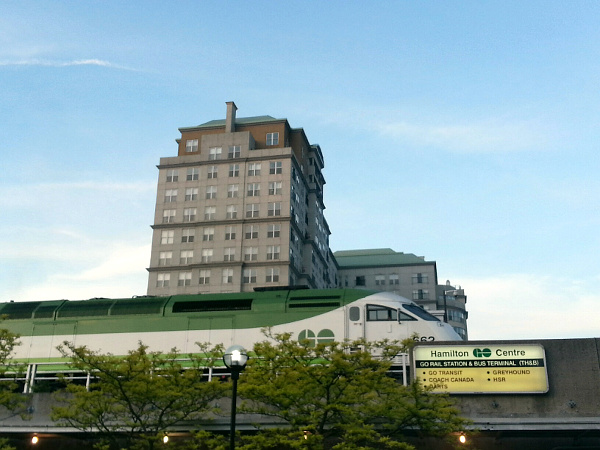 Regional versus local service: What is the difference?

As the name implies, regional service provides transportation throughout a region. An example is the Lakeshore West GO Line, which provides service from Hamilton to Toronto and all the communities in between. Typical station spacings for regional rail service are 2-5 km.

Local rail service provides transportation within a city. An example is the proposed Hamilton LRT system. For local rail service, typical station spacings are 500 metres to 1 km. Currently, the GO rail network provides only regional service, and not local service.

There is one current proposal for GO to provide local service. This is Toronto's "SmartTrack" proposal that would add GO stations for local service within the City of Toronto. The problem with the SmartTrack proposal is that once GO trains have arrived in Toronto, they are full of long-distance regional commuters who will all have extra time added to their trip by stopping at each local station.

This added inconvenience will inevitably result in the loss of some of the longer distance passengers. For SmartTrack, Metrolinx has studied this issue. "For most of the new stations, the number of new riders does not offset the projected loss of longer trips 'upstream' from the stations."

The final station would be under the bridge over Centennial Parkway. To this final station we would construct bicycle and pedestrian paths to Alba Street and the western part of Webster Road in the Gershome neighbourhood. 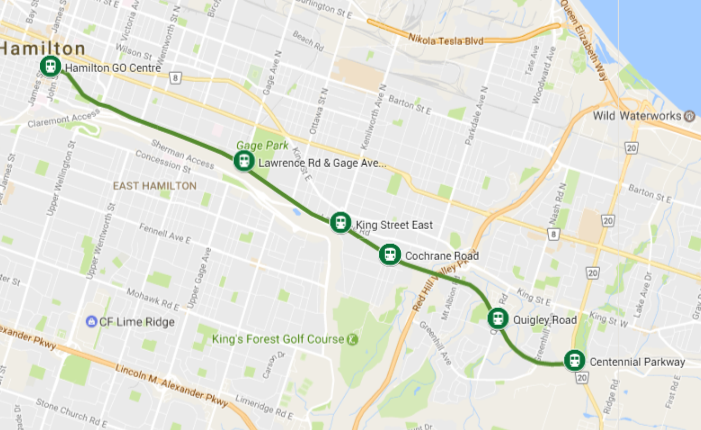 As may be seen in the linked Google photographs, there is space available at all five proposed station locations for construction of a local community station. It is not feasible to add stations east of Centennial Parkway as the railway line then rapidly climbs the Escarpment and no longer runs through populated urban areas.

What will it cost?

It should be possible to create a local community GO station for a cost closer to that of the $2.6 million for a typical LRT station by providing an unstaffed station with a three-car platform and a shelter with bicycle parking and a ticket vending machine.

Their current costs are approximately $2 million for each passenger car and $2.5 million per locomotive.

As much as I'd love to jump in supporting this, I do not see it as feasible due to what will be very low passenger numbers and the high cost of implementation due to the tight corridor of the existing rail line.

There is also the impossibility of adding the necessary rails to service east of Gage Park. To get to Centennial Parkway with two tracks (GO really needs three to be reliable on a mixed passenger and freight line) will involve expropriation of properties, and the addition of a new bridge over the Red Hill.

None of the proposed stops could have parking, and many of them are so landlocked they wouldn't be able to even have a park-and-ride.

The Kenilworth stop would require expropriating a lot of property, and access would require some interesting design; there be need for steps and elevators, driving up the cost of construction, and requiring operating budget to maintain the elevator devices.

Cochrane would have to be east of the roadway, with only one entrance, and again expropriation of neighbouring properties.

Quigley could be planned for today, purchasing a portion of the former high school property at Quigley, and part of the existing City parkland. The problem here would be the need to expropriate some properties on the west side of the park for a few platform.

Centennial would require creative design because the tracks are at a lower elevation than the road. Expropriation or taking away part of Battlefield Park will be required.

Please once again accept my thanks for all your work in bringing transparency to City Hall.

As shown in the Google photographs, the property that would have to be expropriated is currently not built upon.

Centennial would require creative design because the tracks are at a lower elevation than the road.

Nobody lives on Centennial in this area. The proposed station would be under the existing bridge, with bicycle/pedestrian access to the neighbourhoods to the east and west. This would also connect those neighbourhoods to each other. Except for Battlefield Park itself, there are few origins or destinations that would be served by a connection to Centennial, so none will be provided. And Battlefield Park can be accessed from the station via Battlefield Drive.

The stations are far too close together for existing GO equipment, the trains would simply have too little room to accelerate, they just don't have the gearing needed.

HOWEVER, there are several mainline railway friendly, Transport Canada approved or US FRA approved DMU (Diesel Multiple Units) designs that could fill the bill here. They have the gearing to handle faster acceleration in an almost LRT like distanced between station stops. transport Canada Commuter Rail licensed lines shouldn't have stops closer than 2km apart. Transport Canada approved LRT licensed lines can stops as little as 400 metres apart. DMU's depending on the manufacturer can handle stops as little 700-800 metres apart.

Transport Canada or US FRA Approved DMU designs operable on Canadian or US Mainline Railways as long as freight services have some type of temporal separation from the DMU's.

FYI, Ottawa's entire O-Train Pilot Program which started in 2001 included, 8km of single track rail line with passing tracks, a remodeling of an existing CPR maintenance building, 5 station construction projects (35-37 metre long passenger platforms but expandable) plus physical connections to 2 existing Transitway stations at either end of the line, line and basic tunnel and bridge rehabilitation (more was required later), 3 Bombardier Talent DMU's, a Bombardier maintenance contract, extra insurance, the creation of the National Capital Railway and operating cost for 2 years, cost only $40 Million. It doesn't have to be done expensively.

Be aware the Talent #1 DMU is no longer being manufactured and the Talent #2 is just not compatible with Ottawa's and possibly your type of operation, unless you re-gear all the motors and big far bigger passenger platforms tha we did. Hence why Ottawa bought Alstom Coradia LINT 41 DMU's when we needed more DMU's for the Trillium Line. HOWEVER, we have 3 perfectly serviceable Talent #1's in storage and for sale as well as Deutsche Bahn is getting rid of hundreds of them (exactly like Ottawa's DMU's because we piggybacked on their order to save money) as they switch to the Talent #2 DMU.

US Railcar manufactures a FRA compliant DMU for Portland's WES Line and they also use remodeled Budd RDC's as a back up. VIA Rail still uses modernized Budd RDC's for passenger service as well as the new Cotton Belt A-Line Commuter Rail Line in suburban Dallas. RDC's could easily handle this type of line and there many still around North America in storage.

As I understand it, the Talent 1s aren't FRA compliant on a line with freight service. Ottawa was able to use them because CP Rail only used that line after the O-Trains were shut down for the night.

Thank you for the comment. It is quite fascinating to learn of the Ottawa pilot project. My proposal is also about 8 km, so Ottawa is a reasonable benchmark. I am 100% in favor of pilot projects with the motto "If you never fail, you are not trying enough things."

No DMU is entirely FRA compliant however, the temporal separation rule was bent often here in Ottawa. Many times freight was moved during the day however, it rarely happens now due to a lack of customers on the line. We still get some freights during the day delivering rail and road transit vehicles of all kinds as well as other rail vehicles to the Transport Canada/NRC Leitrim Road Static and Dynamic Rail/Road testing facility. There is nothing weirder than seeing a New York MTA Subway Train coming down the track on top of a flat car fresh from the factory in Montreal, to be tested here in Ottawa because the US facility is too far away.

One of the biggest problems/issues that will have to be dealt with during the Stage 2 construction work starting in 2019 are the 2 level rail crossing of the Trillium Line. The first is main VIA Rail line into Ottawa and the second is the main CN freight line in Ottawa. Both are expected to be rebuilt so the Trillium Line will passes over both lines. The issue is that if they want to increase the service frequency of the Trillium Line, Transport Canada wanted those level crossings eliminated for safety reasons. The Transport Canada/NRC testing facility also will require their own main line lead track as well coming off CN's main freight line.

I like this idea a lot, but I don't think it would be a good idea to just pull a full-length GO train east of Hunter station to serve a bunch of 3-car-length platforms. That's a lot of equipment for little return. On the other hand, possibly Metrolinx could use a few more of those Diesel Motor Units currently employed by the Union Pearson Express, and an order for Hamilton could be rolled in here. Running a separate local feeder line into Hunter Street station would not only ferry people to the GO Trains and Downtown Hamilton, but open the possibility of extending service further west, perhaps to Kirkendall North, or up to the Botanical Gardens and Aldershot.