Eyes on the Street

Eyes on the Street: Wear-and-Tear on Hamilton Bike Share Bike 037

It is truly amazing that the SoBi system has been such a fantastic success that the bikes are starting to wear out.

Recently, I took out a Hamilton Bike Share (SoBi) bike and noticed that it had received so much use that the seat was starting to wear out, with a large crack right through the centre. I was annoyed for a second, but then took a look at the bike number: 037, "O'S CLOTHES".

Yes, this was one of the first 200 bikes that have been on the street since January 2015.

It is truly amazing that the SoBi system has been such a fantastic success that the bikes are starting to wear out. Started with only $1.6 million in Metrolinx seed funds, SoBi provides by far the best cost/benefit ratio of any form of public transit. 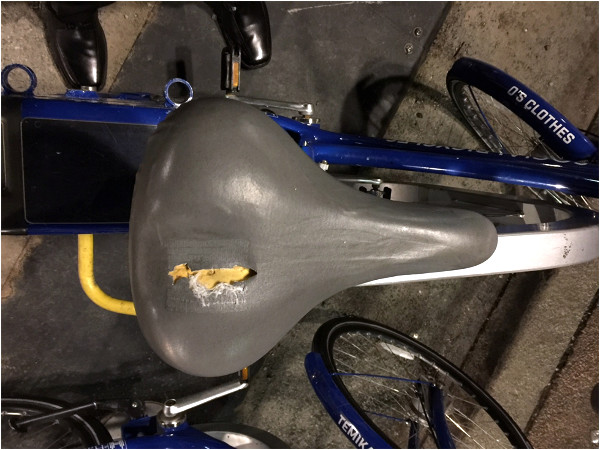 This bike has had so much use that the seat is wearing out!

Biggest frustration with sobi wear isn't the cosmetic stuff but the increasing finickyness of the numeric keypad - half the keys require massive force to press, and half register double-presses. The backspace included. Combined with the slow response of the LCD display makes the entering of ID and PIN into an irritating process of click - wait - click - wait - click - wait.

Yes, that is rather annoying. Particularly on very cold winter days in January and February. The screen response time takes much longer when it is very cold.

I am considering getting a member card that so that I do not have to enter my member number. Just tap the card and enter the PIN code. That would eliminate 7 of 11 keystrokes. See item #2 at:

Has anyone got a member card and can comment on their experience with it?

I've got a member card, and I use it for this reason specifically. I also reserve bikes via the app occasionally for the reason Ryan stated (avoiding typing the number). The app's really good IMHO.