More to Intensification than Number of Units

Last week, the Beasley Neighbourhood Association asked concerned Hamiltonians to make the trek to City Hall to join us in opposing an application that we thought would result in the loss of 59 family-sized rental apartments at a large apartment complex at 181 John Street North and 192 Hughson Street North. 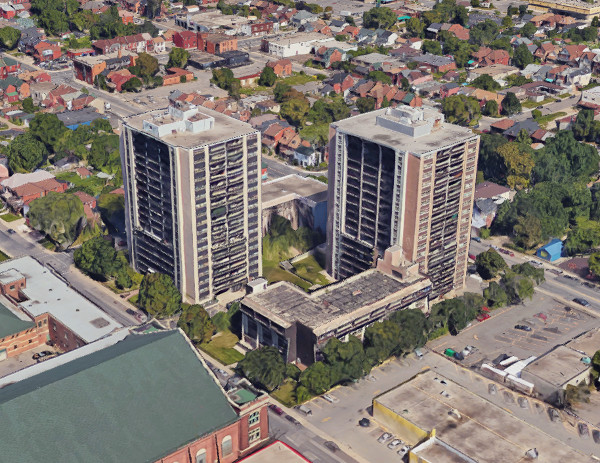 It turns out we were misinformed: the potential loss of three bedroom or larger units is actually significantly higher at 119. I'm told the lower number was based on information provided by Greenwin earlier this year.

Beyond that, I'm happy to report that turnout at the Committee of Adjustment was incredible. On Thursday afternoon, the meeting room was packed with tenants from the buildings themselves, concerned residents, activists, and people representing community groups, neighbourhood associations, and third-sector organizations.

In fact, so many people came to the meeting that the chair had to ask people there in relation to other variances to clear the room to make space for the large overflow crowd waiting outside in the lobby.

For those unfamiliar, the Committee of Adjustment is where property owners go for minor variances when the existing zoning of their property prevents them from doing something that is "desirable for the appropriate development or use of the land, building or structure" in question and maintains "the general intent and purpose of the by-law and of the official plan".

Whether the variances requested by Greenwin, the property owner, are in fact "minor" was a key factor in settling the matter (for now). The Committee voted to deny the variances being requested without prejudice. Greenwin lost.

But the decision was really a message to Greenwin that in the Committee's opinion, the variances were not "minor" in nature and should be considered by City Council's Planning Committee as a rezoning application.

Greenwin can take that advice and proceed with an application for an Official Plan amendment and rezoning or appeal the Committee's decision to the Ontario Municipal Board (OMB).

Until Greenwin decides how it wishes to proceed, it is unclear where things are headed. So, if you're interested, stay tuned.

In the meantime, I'd like to pass along some further information.

Two days before their application was scheduled to be heard at the Committee of Adjustment, a staff report was made available that recommended the variances be approved.

I read their rationale with interest, but soon realized reading through the attached submissions that a letter from Greenwin's legal counsel to the Committee of Adjustment not only revealed more clearly the full extent of the changes being planned, but differed with the staff report with respect to planning rationale.

The staff report appears to accept at face value that Greenwin's proposal to increase the number of residential units on the subject property is intensification and therefore conforms to relevant provincial and municipal plans and policies.

Put simply, the interpretation by planning staff seems to be that an increase in units, which requires a variance to increase the permitted unit density on the subject lands, equals intensification.

Greenwin's legal counsel, however, makes a different argument in their written submission to the Committee of Adjustment:

So is this really intensification, as per Places to Grow: the Growth Plan for the Greater Golden Horseshoe?

That may ultimately be a question that is settled by the OMB, but the Provincial Policy Statement defines intensification as:

The development of a property, site or area at a higher density than currently exists through:

a. redevelopment, including the reuse of brownfield sites; b. the development of vacant and/or underutilized lots within previously developed areas; c. infill development; and d. the expansion or conversion of existing buildings.

Neither Places to Grow, nor the Provincial Policy Statement provide an explicit definition of "density", but the main aim of both is to increase the number of people and jobs per hectare in already urbanized areas.

Increasing the number of residential units in a given area may be an important contributor to achieving higher residential population densities, but is not reducible to it.

Their proposal does not so much add new units as it reconfigures of the internal space within the buildings at 181 John Street North and 192 Hughson Street North. The net effect is to significantly increase the number of apartment units from 383 to 535 by converting existing rental units, specifically most of those with three or more bedrooms, into smaller ones.

As can be seen in Table 1, Greenwin's proposal does retain ten three-bedroom units and will result in a modest increase in the total number of two-bedroom units from 129 to 140.

Both the Growth Plan for the Greater Golden Horseshoe and the Urban Hamilton Official Plan contain language that speaks to building "complete communities", which the former defines as places that:

meet people's needs for daily living throughout an entire lifetime by providing convenient access to an appropriate mix of jobs, local services, a full range of housing, and community infrastructure including affordable housing, schools, recreation and open space for their residents. Convenient access to public transportation and options for safe, non-motorized travel is also provided.

It is unclear how Greenwin's variances contribute to making Beasley a "complete community", especially as the 115 three-bedroom units it wishes to convert, mainly to one-bedroom units, represent approximately one-quarter of all three-bedroom rental units in the "downtown" and "central" part of Hamilton, according to the CMHC's Rental Market Report for 2016 [PDF].

A number of submissions to the Committee of Adjustment attempted to draw attention to how the loss of larger, family-sized units relates to school enrollment and protecting the character of lower city neighbourhoods as inclusive and welcoming places with affordable housing options for a diversity of people and households, particularly families with children.

This should be a major consideration in planning decisions by the City on proposals of this nature. The staff report, however, had little, if anything, to say on these substantive planning issues and may well have played an important role in the Committee of Adjustment's decision to deny the variances sought by Greenwin without prejudice.

Committee member William Pearce was quoted in CBC Hamilton as stating: "It's way beyond our mandate. It's a housing issue. There needs to be some policy guidance around this."

I am the proud father of three children. It is therefore with some concern that I read about things such as moving the number of four-bedroom units to zero. That sends a powerful message of exclusion to my family.

I am the proud father of one child. It is therefore with some concern that I read about things such as moving the number of 2-betdroom units to one less. That sends a powerful message of exclusion to my family.

Greenwin's proposal will slightly increase the number of two-bedroom units and I don't have issue with that. I'm also not against development that adds more Jr. 1 bedroom and 1 bedroom units to our overall housing stock. To be inclusive we need to maintain a reasonable mix.

Ideally, new development will do this ... add more units of each type. But we don't currently have policies that address this, at least not explicitly. High density housing tends to strongly skew to smaller units for a bunch of reasons. Having said that other cities are trying to ensure an adequate minimum % of 2 and 3 bedroom units are built. This case is a little different, because it involves changes to the configuration and mix of units in an existing apartment complex.

Admittedly, we aren't dealing with a simple or straightforward problem. Nor are these problems unique to Hamilton. But there is no way that Places to Grow will work, in terms of curtailing sprawl and using new development to build compact, vibrant, complete communities, if family-suitable units aren't sufficiently part of the mix in new developments in the lower city.

the number of bedrooms, and thus the number of residents occupying the Properties, would remain largely unchanged.

Kevin's comment: I'll call BS on this one. No matter how many people are living in a unit, there is a certain minimum infrastructure required. For example, every unit has to have a bathroom and a kitchen and plumbing for them. This is true for a family of five people living in a four-bedroom unit or a single person living in a one-bedroom.

Obviously it is more efficient and results in higher density when five people are sharing the same infrastructure. In other words, I predict that the existing structure has a higher density than will be the case if the proposed change were to be made.

I wonder if the owners desired changes were driven by the trend of vacancies in the building? Do the 3 and 4 bedrooms go vacant for long periods of time? They are likely seeing an uptick in requests for two bedroom apartments.

The reality these days is that many young families (often one child) can no longer afford to buy a starter home so they are renting. I wouldn't be surprised if they are now becoming frustrated on that front as well.

Hard to say much about trends in vacancies, because for at least a couple of years Greenwin appears to have been inducing tenants to leave and leaving many units vacant as part of what they are doing.

The reality these days is that many young families (often one child) can no longer afford to buy a starter home so they are renting. I wouldn't be surprised if they are now becoming frustrated on that front as well.

Yes that is part of Greenwin's argument, and perhaps that of our planning department, but it doesn't really wash. They aren't taking many 3 bedroom units and converting them in 2 bedrooms units. The lion's share of the shift is to 1 bedroom units.