The Halifax Department of Silly Walks 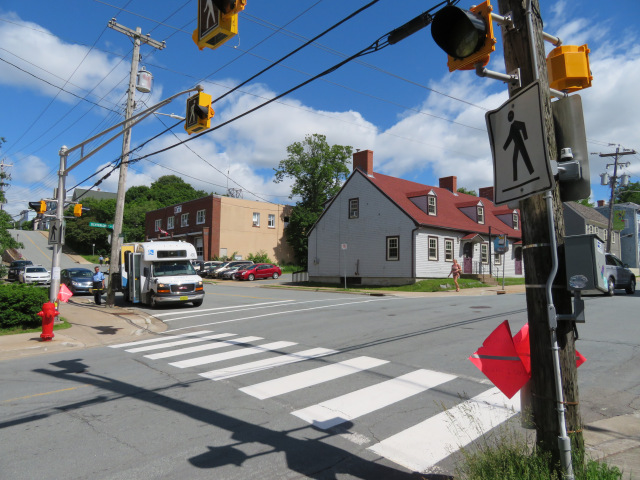 As part of our trip through the Maritime Provinces a few weeks ago, we visited Halifax. Nova Scotia's capital and largest city is the economic, cultural and transportation hub for Atlantic Canada. In 1996, the City of Halifax was merged with surrounding towns and suburbs, as well as rural Halifax County. The Halifax Regional Municipality is now 5,490 square kilometres, nearly nine times the size of the City of Toronto.

Like many amalgamated cities in Canada, Halifax has a historic, densely populated inner core, surrounded by urban neighbourhoods. Beyond the old cities of Halifax and Dartmouth is a ring of suburban homes and businesses, such as Bedford, Cole Harbour, and Bayer's Lake. And like Hamilton and Ottawa, there's another, even larger ring of rural farms, woodlands, small villages, and exurban estates.

Peggy's Cove, for example, is near Halifax's eastern boundary. Councils of these amalgamated cities must reconcile the needs and desires of the urban centre with those of suburban and exurban residents. In Toronto, bike lanes are held up, or even removed, for the benefit of motorists living outside the urban core. The debate over Hamilton's LRT has pitted suburban councillors against those representing the lower city. Halifax is no exception.

Halifax's urban core is worth exploring, despite construction detours around the new convention centre, the waterfront, and new condominium development. Downtown includes the historic Citadel, Province House, and the Art Gallery of Nova Scotia, among other museums. Halifax Common and the Public Gardens are welcoming public spaces in the classic New England style.

Halifax Transit operates a ferry service to Dartmouth - only $2.50 per person, with the return trip free if taken within 90 minutes - which offers great views of the city and the various commercial and naval ships in the harbour. The ferry is also fully integrated with the local bus system. The new Halifax Central Library is one of Canada's greatest new public buildings: the five storeys are bright and user-friendly, and there is even a rooftop patio and café to visit.

Downtown is compact and a pleasure to walk abound. But once you stroll beyond Halifax's urban core, the landscape changes. Signed crosswalks are fewer and farther between, even in older residential neighbourhoods. 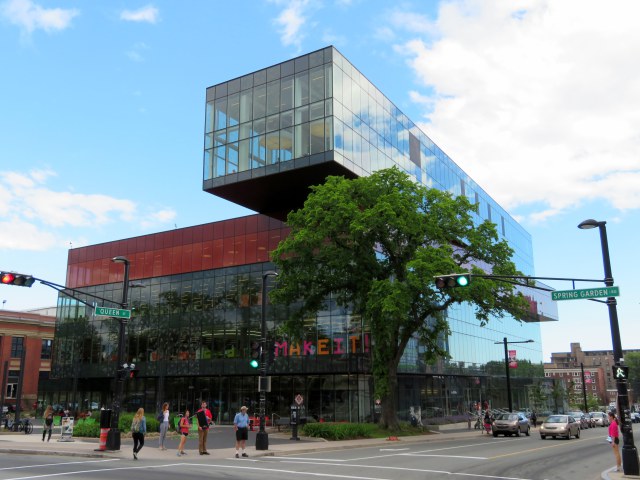 Maritimers are famously courteous to pedestrians. Most motorists will slow or stop if they see a pedestrian about to cross the street, whether or not there's a marked crosswalk. But that slower pace of life in itself does not prevent collisions. As in any North American city, Halifax's arterial roads and suburban streets are built to move cars through quickly and efficiently.

That's where the flags come in. What was intended as a well-meaning, inexpensive measure to promote pedestrians' safety at crosswalks has become one of the most ridiculous pedestrian initiatives.

Crosswalk flags were the idea of just one man, Norm Collins, a Dartmouth retiree. The flags and buckets only cost $200 per crosswalk, compared to $15,000-25,000 per crosswalk for proper signal lights.

In 2015, municipal staff were cool to pedestrian flags, though the idea enjoyed support from HRM councillors, particularly suburban politicians, and the flags were approved by council.

Now, at most crosswalks outside Halifax's urban core, there are buckets of bright orange flags for pedestrians to take when crossing the street. These buckets and flags can even be found at signalized crossings with flashing amber lights activated by pressing a button. Each bucket has instructions printed on how to "be cautious...be seen...be safe." 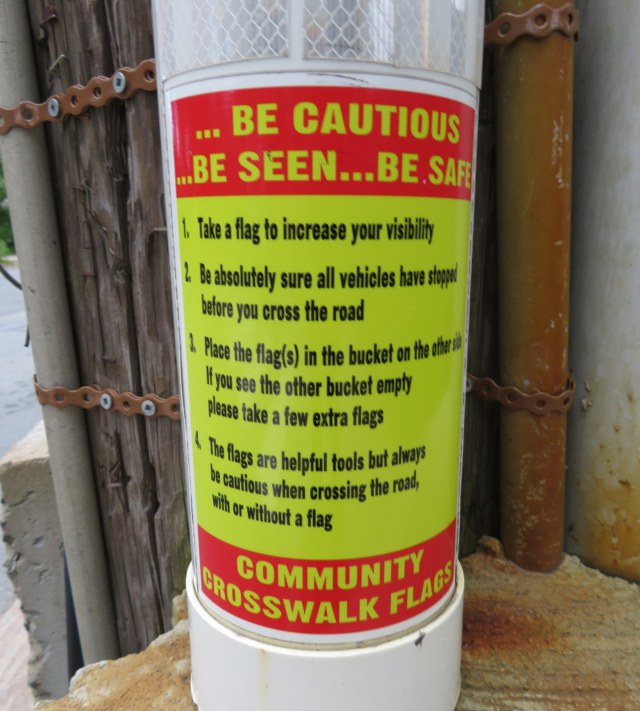 One of the buckets, with instructions on how to use the flags left inside

Yes, even when there are flashing lights at an intersection, Halifax Regional Council expects pedestrians to use these flags (even if city staff disagree). The instructions above clearly indicate that the onus for safety is entirely on the pedestrian crossing the street, not on motorists taking care by driving safely and attentively.

Vision Zero is the Swedish road safety philosophy that seeks to end traffic fatalities by minimizing the effects of mistakes made my all road users. Lower speed limits, enforced by road re-engineering works (such as bump-outs, speed humps, and tighter corners at intersections) that slow down cars and trucks is one such effective measure. So are complete streets, designed to improve the safety and comfort of pedestrians and cyclists. Cheap pedestrian flags, which do not address the root problem, are not within the spirit of Vision Zero.

If Halifax Council - or any municipal government - was serious about improving pedestrian safety, features that would help include improved lighting, narrowing the roadways at pedestrian crossings, and raising the crosswalks closer to the curb level, forcing motorists to slow down (and also improving drainage.

Flags and high-visibility clothing are useful for temporary conditions and for traffic control personnel, but not for everyday conditions and everyday people. The onus should always be first on the licensed motorist to be attentive to the road and drive according to the conditions.

A ridiculous pedestrian safety measure deserves a ridiculous walk, as I demonstrated in Dartmouth. 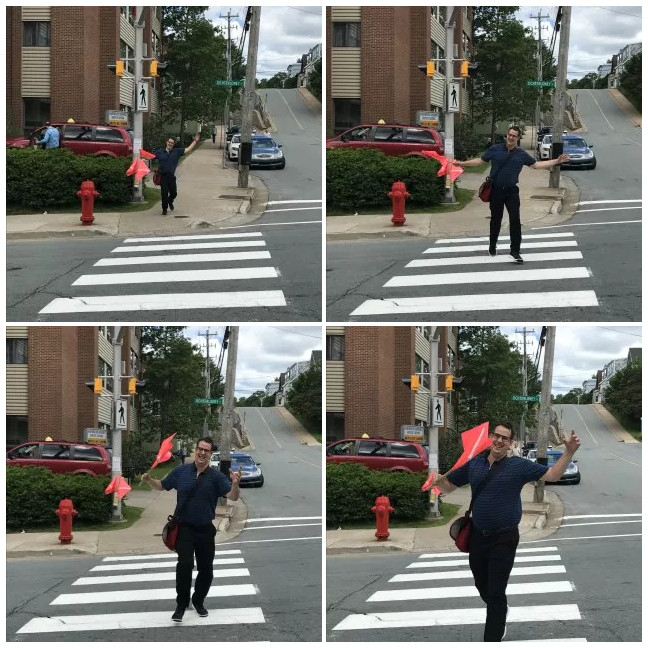 This article was first published on Sean Marshall's personal website.

Sean Marshall is a geographer, writer, and an active transportation activist living in Toronto (but a frequent visitor to Hamilton.) He's an occasional contributor to Spacing and Torontoist an a co-founder of Walk Toronto. His personal blog can be found at seanmarshall.ca.