Having a farm at McMaster can do even more to build our personal capacity to address climate change in way that does not build cynicism, but rather creates community and shows that we can make a difference while having fun.

Something quite remarkable is happening at Universities from coast to coast across Canada. This something is urban farms. I was inspired when I read the following from a 2011 Maclean's article:

This past September [2011], New Brunswick's Mount Allison University held an event unprecedented in its 172-year-long history: a you-pick potato harvest. For the first five Saturdays of the new school year, students and Sackville residents were able to pick Russet and Superior potatoes from a boggy, 9.7-hectare [24 acre] farm in the heart of the campus. The rest of the spud harvest - a yield of 30,000 pounds - was transformed, to the delight of many ravenous undergrads, into fresh, hand-cut french fries and mashed potatoes in the kitchen at Jennings Hall.

The purpose of these farms is to act as living laboratories for students to understand how to grow nutritious food that works with the planet.

Teaching students how to provide themselves with nutritious food and how to do it in a sustainable way is some of tremendous importance. This is because two existential problems in the world today are human health and climate change.

These two issues are not only intrinsically interconnected, but also healthy eating and climate change can both be learned about on a farm. Learning about two of the most sever issues on our planet certainty seems like they would be worth learning about.

The word farm may be too big of a concept for some people, but the severity of climate change commands for us to take bold and ambitious actions. A farm helps with climate change because it allows for us to tangibly interact with our planet and for us to attain a true understanding of what sustainable living entails.

Getting people to have sustainable consciousness is vital, as 2017 is the 30th anniversary of the term 'Sustainable Development' that was coined for the 1987 Bruntland Commission Report [PDF], and the planet's condition has only gotten worse since 1987.

Having said that, we need to understand that climate change is not some future concept that we will have to address, rather it is dangerously unfolding right now.

Even though McMaster University in Hamilton does not have an urban farm, there is a groundswell for local food among students, faculty and staff. 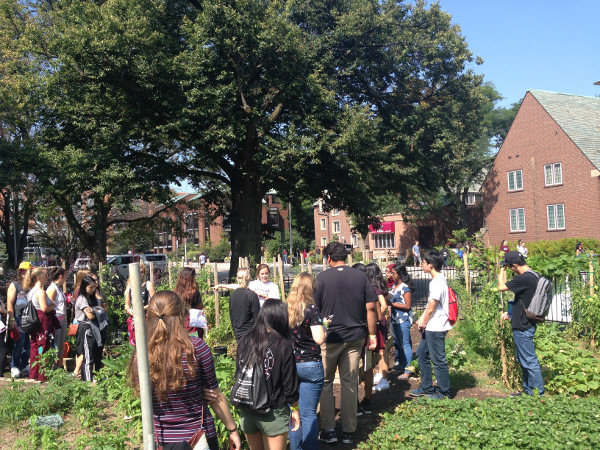 The incredibly progressive thinking Director of Grounds, Carlos Figueira, created a garden for Dr. Chad Harvey and me to test the appetite McMaster students have to grow their own food. We ran six garden-based cooking classes through the Student Wellness Centre's Food for Thought program that is funded generously by Alumni House's Mac 10 program. 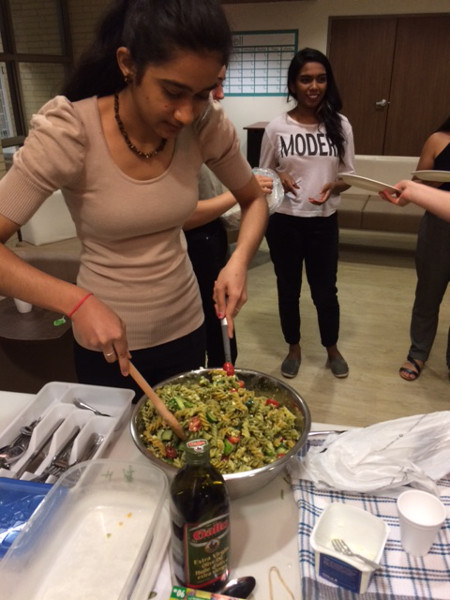 Students preparing meals in the Food for Thought program

Two questions were answered this summer: McMaster is proactive in creating a sustainable food system in order to be a place of learning, and the students want to see more of this.

In addition to this, I have talked to many faculty and staff members at McMaster and they are all supportive of a large sustainable food system at the university that goes beyond the two current community gardens that McMaster has.

Is it time for a McMaster Urban Farm? In April 2016, one McMaster professor asked, "Question for @McMasterU community in the wake of #BIBCclimate week: why don't we have a Mac farm for student food & education?"

A farm is not just for us to grow food, but it is for us to be connected to our food system and for us to understand the impacts it has.

Industrial agriculture is responsible for the health of food being at an all-time low, as four out of the six biggest killers in the United States are related to the food we eat.

Also, industrial agriculture has eroded natural lands to such a point that 27 percent of natural land in North America is now farmland and the type of agriculture of that is practiced is monoculture systems, which are the grave for bio-diversity.

Ontarians should have chills running down our spines when we hear that there are 2,337 species in Ontario that are either endangered or vulnerable and of special concern. Without Biodiversity, ecosystems cannot run and thus the health of the planet is seriously diminished.

The saddest thing here is that agriculture does not have to be practiced in this way, as we can do it differently. Dr. Chad Harvey and I are trying to bring permaculture farm to McMaster.

Permaculture is an agricultural design system that mimics a natural ecosystem to produce food while restoring nature. The benefit of permaculture is that biodiversity and the production of food can co-exist. This is an example of true sustainability because it is tending to the needs of humans and nature.

Before we can talk about any farm or physical project being constructed, we must understand that the land is not ours, but rather it belongs to Indigenous people. If we are to progress in a dignified human way, we would be much improved if we adopted the Indigenous perspective of land in the sense that is no one owns it but rather we all act as stewards of the land.

McMaster has gotten a step closer to respecting and honouring Indigenous people by acknowledging that it is located on the traditional territories of the Mississauga and Haudenosaunee nations.

The next step for McMaster to continue respecting Indigenous people is to have a farm that grows Indigenous plants so that we can begin to learn more about Indigenous perspectives and culture.

Battle of the Eggplants

Additionally, if we are going to talk about how growing our own food has the ability to enact change, we should also talk about the joy of cooking, because this is something I think we have been forgotten as the waves of restaurants continue to open in Hamilton.

The Battle of the Eggplant can remind us about the fun of cooking, as this competition saw two of McMaster's very own square-off.

In one corner we had Dr. Ameil Joseph, a professor from the school of social work, and in the other corner we had Taryn Aarssen, an outreach assistant from the student wellness centre.

Both competitors were given eggplants from the garden behind the Biology Greenhouse and they were to cook a meal with this ingredient. The rules were simple: the best-tasting dish would be chosen as the winner.

Dr. Joseph is one of the most gastronomically inclined professors on campus. Taryn, on the other hand, has never found an ingredient that she could not turn into a tasty treat.

Dr. Joseph began his dish by sautéing the eggplant in a screaming hot skillet until they reached a juicy golden brown. My heart simultaneously melted a little as I watched the spectacle. Then Dr. Joseph drew upon his nuanced worldview and added garlic soya sauce over the eggplant. This brought the taste of Asian into the dish.

The result of this worldly combination of flavours was like experiencing a perfectly choreographed opera song, as the sweet eggplant was contrasted brilliantly with the nutty, salty, rich soya sauce. The loveliness of this dish was that it was a three-ingredient wonder: Dr. Joseph let the eggplant do all the talking. 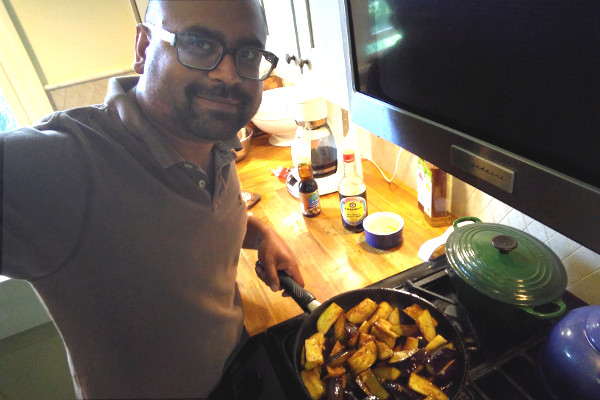 Taryn started her dish by slicing the eggplant so thinly that it only had one side and then she placed it on top of a sauced pizza dough. Then she added fresh mozzarella and purple basil. Then time and space stood still for a few moments, because instead of simply cooking the pizza in a generic oven, she cooked it in a wood-burning oven!

The result was one for the ages as the crisp and perfectly-charred pizza was as gorgeous as it was delicious. The toppings on the pizza were kissed with a lick of flame that made the flavours take on another life form.

The creamy fresh mozzarella cheese with the zesty tomato sauce was the perfect place for the tender sweet eggplant to call home and then the symphony of flavours were topped off with a floral aroma of purple basil. 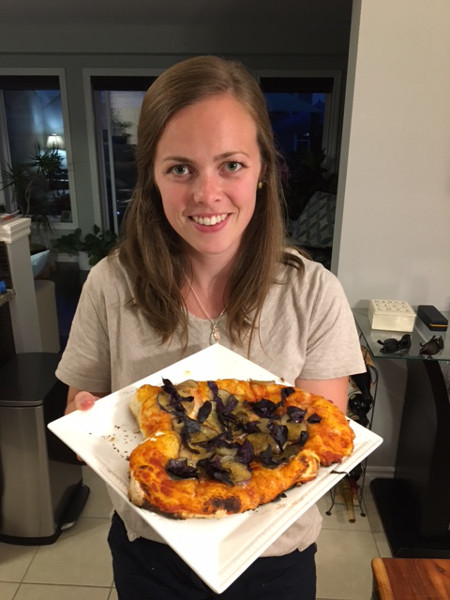 Both dishes tasted of summer and they were great in their own unique ways, but I would give the victory to Taryn. It was difficult work tasting both dishes and deciding on a winner, but somebody has got to do it. The pizza beat the garlic soya sauce eggplant because the crisp of the pizza crust with creamy center could quite literally defeat any force in the world. Perhaps if everyone in the world ate this pizza everyday there would be peace on earth.

Some of you may think that my explanation on the battle of the eggplants was too much of a dramatic embellishment. However, we need to remember that cooking with each other not only connects us with one another, but it binds us to the best bit of life and is an expression that our common desire to eat is a social act.

Witnessing strangers cooking, laughing, learning and sharing food with one another is seeing humans at their very best. This is what the Food for Thought cooking classes are all about and I am so happy to see students building relationships and find meaning in the mundane act of food that many of us take for granted.

We can use this fun and familiar context of cooking to take climate change head-on because it spins this systemic problem of antagonistic drudgery into a more hopeful context where relationships are built, and where climate change is viewed as an opportunity to create change and achieve fulfillment.

Having a farm at McMaster can do even more to build our personal capacity to address climate change in way that does not build cynicism, but rather creates community and shows that we can make a difference while having fun.

Growing food is something we can all do to improve our health and the health of the planet that provides so much for us, it is a very empowering opportunity, all we need to do is start and we will be surprised to see many great people already out there making change happen!

Adam Chiaravalle is a a research assistant for Dr. Chad Harvey in the School of Interdisciplinary Sciences at McMaster University.

McMaster University currently has a large number of surface car parking lots that could easily be transformed into farmland. Huge win!