Lister Block: Writing on the Wall

Lister Block hangs in the balance; can any possible outcome please enough people to resolve the conflict over its fate? 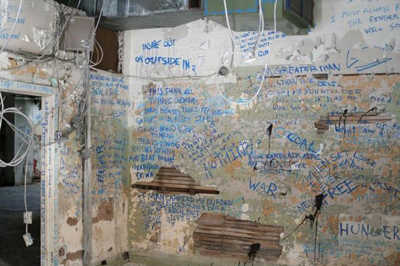 With its fate in the hands of the Ontario Ministry of Culture and a proposed meeting of stakeholders to find a "compromise" (I'm not sure how to find a compromise between demolishing a building and not demolishing it - perhaps they'll agree to demolish just half), here's a haunting photo from inside the derelict Lister Block.

Local photographer Joe Ceretti, whose work has recently been improving the look of RTH articles, took a photo of the Lister in May and was disheartened by what he found.

He also created a "vintage" postcard of the Lister in a tribute to the heartbreaking (browse around it to see what I mean) Vintage Postcards of Hamilton website: 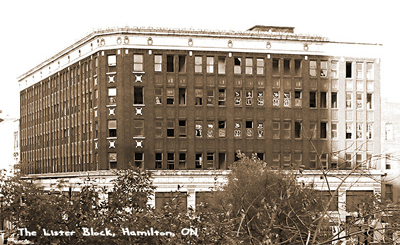 Now everyone can see the Lister like I see it. Still beautiful on the inside. Would of been nice if I could of gone in a little more... erm, legally however.

Honestly I believe there is no compromise for many of us. Demolish or do not demolish. There is no middle ground. I should mention that in a rather pointless move, LIUNA has finally hired a guard to protect the building and have boarded up the skylights on the main arcade. Cause, you know after 15 years of them being wide open its gonna make a huge difference.

theoretically there is 'no middle ground' but if LIUNA is able to convince the province that the building needs to come down simply because the ceiling heights aren't high enough on 2 floors, then at least saving the facade would be a good step in the right direction. Obviously most people (even those who read the Spec and are walking around acting like experts saying "tear it down") would like to see the building saved so we dont' always have to talk about Montreal and Boston or Ottawa and their fabulous historic downtowns with buildings that have seen worse days than Lister now looking amazing. I hope the province will issue a verdict to restore the building (or at least not use any taxpayer money to demolish it) so LIUNA can get their high-profile project and Hamilton spares one building from the newest Gary Evans book.

This is so so like Hamilton - this building should have been taken care of approx. 15 years ago!! - small minded Hamilton!!!! - this city council would sell their mothers' out to make themselevs look good!!!!!!!!!!!!!!!!!

City councilors in Hamilton are such douche bags...Sam Merulla is the biggest douche!!!